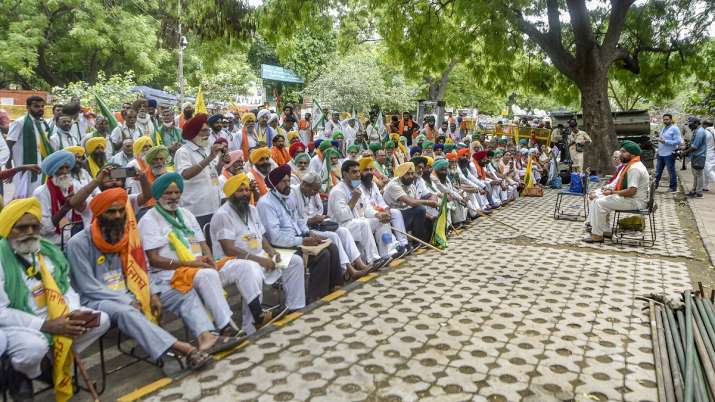 
New Delhi. Farmer leaders protesting against the Centre’s three agricultural laws on Thursday said they fear the government is spying on them through the Israeli software Pegasus. Farmer leader Shiv Kumar Kakka said, “This is an immoral government. We suspect that our numbers are included in the list of people who are being spied on.” He alleged, “The government is behind the spying. This is clear and the issue is gaining momentum. We know they are watching over us too.

In the press conference of ‘Kisan Sansad’, General Secretary of All India Kisan Sabha Hannan Mollah said that Parliament is not listening to the farmers, so we have given a letter to all the MPs that if we win by our vote, then do so that we remember while voting. Keep it If you are honest then take our question. We came here today. This will continue till August 13. Every day 200 farmers will come from Singhu border and the issue of farmers will be discussed. Today the first of the 3 laws was discussed on APMC. After this we will reject the law in the Parliament and appeal to the Parliament to reject the law by following the words of ‘Farmers Parliament’. The government of the country is anti-farmer government. On the farmers’ protest against the agricultural laws, Hannan Mollah said that it has been 8 months for the farmers to protest but the government does not have time. We told the members of Parliament that you should put pressure on this issue so that the government can talk.

Swaraj India President Yogendra Yadav said that the phone numbers of farmer leaders will be found in the figures for the year 2020-21. “When this figure is made public, we will definitely get our numbers,” Yadav said. The protesting farmers have come to Jantar Mantar to show the government that farmers are not fools. The issues of farmers were discussed in the Parliament of Britain, but not in the Parliament of India. Addressing the press conference, Yadav stressed for debate on the issues raised by the farmers against the central laws.

Farmer leader Hannan Mulla said he had written to all MPs to raise their demands, but alleged that Parliament was not taking up their issues. A group of 200 farmers reached Jantar Mantar in central Delhi on Thursday to protest against the Centre’s three controversial new agriculture laws during the monsoon session of Parliament. Police have maintained security cordon around central Delhi and vehicular movement is being closely monitored. Delhi Lieutenant Governor Anil Baijal has given special permission to a maximum of 200 farmers to protest at Jantar Mantar, a few meters away from the Parliament complex, till August 9.