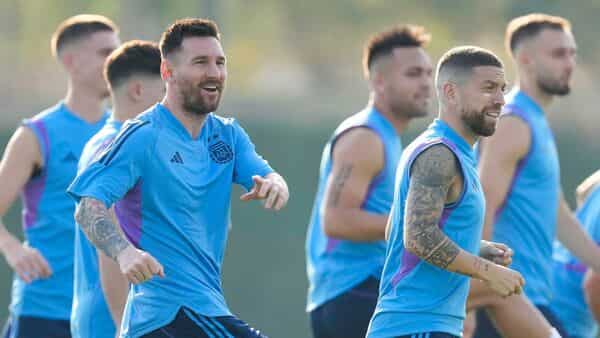 On November 22 at the Lusail Iconic Stadium, Lusail, Argentina play Saudi Arabia in the opening match of their FIFA World Cup 2022 campaign. In 1978 and 1986, the Latin American nation took home the coveted trophy, and Lionel Messi will want to repeat the feat in what will undoubtedly be his final dance by him on the international stage. Argentina won the Copa America in 2021, and they haven’t lost in 36 games since. They have won their last five games, scoring 16 goals and recording five clean sheets.

Prior to Argentina’s tournament opener against Saudi Arabia, Messi has responded to the frequently asked question concerning his rumored injury. Speaking to the media during the customary pre-game press conference, Messi reacted to claims that his fitness was in doubt after he had apparently skipped training in Qatar. Messi denied such claims that he had an ankle injury and said he would be ready to lead Lionel Scaloni’s team against Saudi Arabia.

Saudi Arabia will be hoping to at least match their World Cup performance from 1994, when they barely made it out of the group stage and lost in the round of 16. They have only won two of their last ten games in all competitions, and they will be put to the test by the Albiceleste.

Argentina have gone on an incredible 36-game unbeaten streak across all competitions since losing 2-0 to Brazil in the Copa America 2019. During this time, they have qualified for the FIFA World Cup 2022 without dropping a contest and have won each of their last five matches overall. After losing to Germany in the final in 2014, Argentina’s elimination in 2018 from the last 16 with just one victory to their name was a bitter disappointment. Messi’s fans would like to have a much more convincing effort from the Argentine team since this tournament is reported to be the last one for the iconic footballer.

The Green Falcons, who had the honor of facing the host nation Russia in the 2018 World Cup opener, suffered a dismal 5-0 loss, and they will probably be anticipating a similar outcome against a desperate Argentina. Four of Saudi Arabia’s five opening World Cup matches have ended in losses, and the country is unlucky to begin 2022 with what may turn out to be the most difficult of all the opening games.

Argentina and Saudi Arabia have never met at the finals of a World Cup before, but the South American team boasts a record of two wins and two draws from their previous four clashes with the Asian nation, most recently being held to a goalless stalemate in a 2012 friendly.

As is the case in every game he plays, Lionel Messi will undoubtedly be the player to watch, with Angel Di Maria on the opposing side of the attack. Leandro Paredes and Nicolas Otamendi, the star players who skipped the team’s outdoor training camp at Qatar University, are anticipated to have a significant impact. Saudi Arabia will depend a lot on center-back Abdulelah Al-Amri and left-back Yasser Al-Shahrani to contain the Argentine attack. Meanwhile, they would like forward Firas Al-Buraikan to score for sure.

The Argentina vs Saudi Arabia match will be played on November 22 at 3:30 PM (India time).

The Argentina vs Saudi Arabia match will be broadcast live on the Sports18 and Sports18 HD TV channels in India and Jio Cinema’s app and website will both offer free live streaming of the event.

Although Saudi Arabia have played with admirable defense in 2022, there has been a noticeable lack of goals scored at the other end, and they are unlikely to find much joy when playing against Argentina that are in superb form. Messi and boys, however, would likely have a cautious start of the tournament and seal victory with 2-0 in their favour.