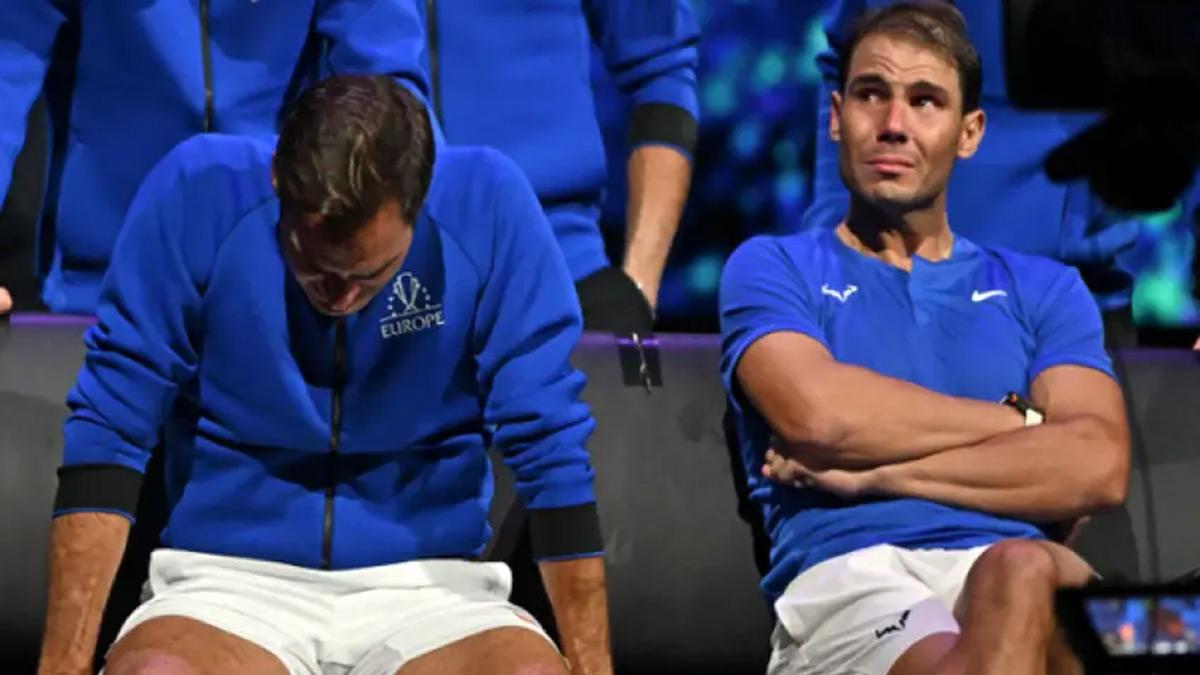 Tennis legend Roger Federer couldn’t hold back his tears after losing his farewell match in the 2022 Laver Cup in London on Friday. Federer paired up with his long-time rival Rafael Nadal in the doubles event at the Laver Cup against Jack Sock and Frances Tiafoe, who defeated the star duo 4-6, 7-6 (2), 11-9 in a match tiebreak. The match was between Team Europe, Nadal and Federer, and Team World, Sock and Tiafoe.

The last match started off well for the star duo who won the first set 6-4, but lost the second set 7-6(2) and the final set 9-11. All these years, the world has seen both the players playing against each other. But both gave a spectacular treat to their fans after playing Federer’s last game together.

After the contest ended, the Swiss teacher, 41, couldn’t stop his tears during his farewell speech. A video of the duo has become widely popular on social media platforms in which Rafael Nadal, sitting courtside with Roger Federer, was seen crying as his great rival bid an emotional farewell to tennis.

The legend in his farewell speech said: “We’ll get through this somehow,” Federer said. “It’s been a wonderful day. I told the guys, ‘I’m happy. I’m not sad.’

“It feels great to be here and I enjoyed wearing my shoes one more time. Everything was the last time.”

After explaining how the people around him made him less nervous, Federer continued by thanking Nadal and all those other in attendance. “I am so happy I made it through. The match was great,” Federer said. “I couldn’t be happier. It’s been wonderful. “And, of course, playing with Rafa [Nadal] on the same team and having the guys, everybody here, all the legends.”

After he was asked about how amazing it was to retire with his foes-turned-teammates by his side, Federer said he’s always been a team player.

“I always felt I was a team player at heart. Singles don’t really do that.”

Novak Djokovic, Stefanos Tsitsipas and Casper Ruud were some of the Team Europe players that Federer thanked.

Federer, who is known for never hiding his tears, said he was doing much better than he had imagined because he could at least get some words out.

Nadal breaks down too

Once the match was over, the 22-times Grand Slam winner Rafael Nadal said it was a tough night for him emotionally as their defeat to the American pair of Jack Sock and Frances Tiafoe brought an end to the 41-year-old Federer’s dazzling career .

“When Roger leaves the tour, yeah, an important part of my life is leaving too because all the moments he has been next or in front me in important moments of my life. So has been emotional (to) see the family, see all the people. Yeah, difficult to describe. But, yeah, amazing moment.” said Nadal.

“For me, it has been a huge honor to be a part of this amazing moment of the history of our sport, and at the same time a lot of years sharing a lot of things,” Nadal said.