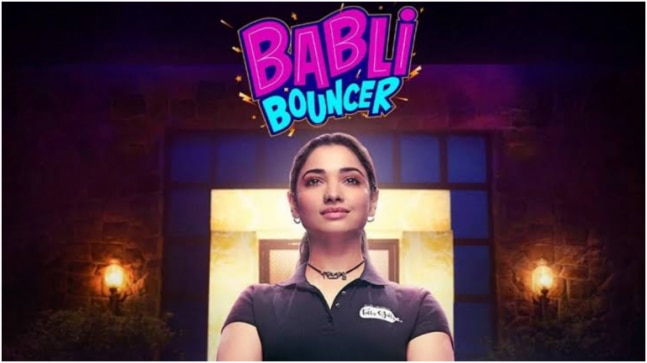 Madhur Bhandarkar’s films are known for scratching beneath the surface. After Fashion, Page 3, and Heroine, the filmmaker set a precedence with his brand of ‘real’ and ‘reflective’ cinema. Babli Bouncer, however, is a major drift from that. With the Disney+ Hotstar original film, Bhandarkar attempts a light-hearted one in a long time. The last time he tried something similar was with Dil Toh Baccha Hai Ji. Does he manage to create the same magic again with Babli Bouncer?

Babli Bouncer is about a young girl, Babli (Tamannaah Bhatia), who is naturally gifted with physical strength. She eats 12 parathas easily and gulps down glasses of lassi without blinking. She feeds in every stereotype you might have of a ‘desi’ girl from a village in the Hindi heartland. Haryanvi accent, check! Struggling with English, check! Burps in public, check! Babli moves to Delhi after securing a job as a bouncer at a pub in the capital city. Although her ambitions of her are not her own, she soon finds motive in life, which does not end with marriage or having children. The story revolves around this standard plot, with no major twists or turns.

Babli Bouncer seems to be a product of lackluster and lazy writing. The story is predictable from the get-go. It is difficult to understand the intentions behind Bhandarkar’s vision for Babli. On the surface, it would seem like a story of a female bouncer in the capital city, but the bubble is soon burst. The character of Babli is written poorly with no major arcs. Using a man and Babli’s desire for him as a crutch, the film makes a sorry attempt at lending it a strong female voice. When it finally tries to convey a message, it seems forced and caricaturist. For a filmmaker who has unabashedly shown the reality of showbiz, this is such a disappointment.

In a film based on female bouncer, it would have been interesting to see their journey, their plight. But what Bhandarkar serves is an unnecessary love triangle that hardly adds any novelty to the story. The filmmaker seems to have given in to following a certain ‘formula’ with Babli Bouncer. To keep it light-hearted and ‘woke’, the story loses its essence. Although Tamannaah Bhatia and the supporting cast try to elevate the mediocre script with their acting chops, it isn’t enough for you to invest in their story.

Tamannaah is hilarious. She pulls off Babli with innocence which comes naturally to her. Although it does take time to warm up to Tamannaah as Babli in the beginning, but nevertheless she comes to her own, 15 mins into the movie. The dialogues add the much-needed punch from time to time, leaving us chuckling. However, the overall gender politics of the film is inconsistent. The music for the film doesn’t add much value to the overall film either.

It won’t be wrong to say that this is perhaps the weakest offering by Bhandarkar in a decade.