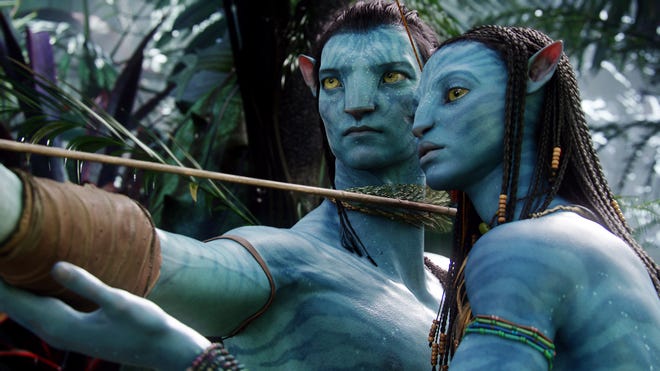 Yeah, we don’t either. Despite being the highest-grossing movie of all time with $2.8 billion in global box-office receipts, “Avatar” has curiously left almost no pop-culture footprint since opening in theaters in 2009. The film, which will be re-released in theaters nationwide Friday, follows a paraplegic former soldier (Sam Worthington) who travels to the lush planet of Pandora, where he tries to obtain information about a blue alien tribe and winds up falling for one of the humanoids (Zoe Saldana).

But “Avatar” merchandise never became a “Star Wars” or “Jurassic Park”-like juggernaut. (Can you remember the last kid you saw playing with a Tsu’tey action figure?) And many people would struggle to recall any of the characters’ names or plot specifics, with one Buzzfeed quiz joking, “Do You Remember Anything At All About ‘Avatar’?”

That lack of cultural resonance raises a lot of eyebrows around “Avatar: The Way of Water” (in theaters Dec. 16), the first of four sequels in a hoped-for franchise that director James Cameron (“Titanic,” “The Terminator “) have planned.

“If you asked me what ‘Avatar’ is about, I probably couldn’t tell you – and I don’t think I’m alone,” says Daniel Loria, editorial director at Boxoffice Pro. “This (new film) is probably going to be the biggest question mark James Cameron has ever had in his career. if anyone is sitting around the dinner table saying, ‘You know what? I really want to see another one of those “Avatar” movies.’ ”

So why has “Avatar” failed to stick around? Even with nine Oscar nominations and three wins, the original movie was criticized for its simplistic storytelling and flat characters, with no charismatic action heroes like Han Solo or Ellen Ripley for viewers to latch onto. The film also arrived a year after the first “Iron Man” with Robert Downey Jr., which launched Marvel’s strategy of releasing three or four superhero movies a year.

“We’re in a different world now,” says David A. Gross, who runs Franchise Entertainment Research, a movie consultancy firm. “Superhero movies have come a long way during the last 13 years and they now dominate the space. Audiences have a lot of experience with gob-smacking storytelling and mind-blowing special effects.”

Monitor your fluid intake:No matter how long ‘Avatar 2’ is, movies aren’t going to have intermissions

The question now becomes, where can Cameron take us next? Some of the biggest draws of “Avatar” were its stunning landscapes, eye-popping 3D and groundbreaking motion-capture technology. The sequels not only have to match, but somehow top that.

“James Cameron thrives on taking storytelling risks and succeeding. We’re going to find out if he can do it again,” Gross says. “There’s no doubt that audiences are going to be excited and ‘The Way of Water’ is going to have a big opening. But today, a sequel has to be bigger, more exciting and more satisfying in order to sustain a series’ success. To do the kind of business that ‘Avatar’ did, today’s audiences are going to have to be so captivated that they come back to see ‘Way of the Water’ again and again, as they did 13 years ago.”

Loria echoes that one should never underestimate Cameron: “If you doubt him, you end up looking like a clown.” This weekend’s “Avatar” 3D re-release is expected to make a respectable $7 million to $12 million in its opening weekend, according to Boxoffice Pro, and should go a long way in helping reintroduce the world of Pandora to moviegoers before “Way of Water” arrives later this year.

While speaking to USA TODAY earlier this week, Cameron acknowledged that the current moviegoing landscape has been changed by the pandemic and the rise of streaming. But he’s optimistic that “there’s still a marketplace for a movie of this size.”

“It’s not a bigger leap of faith than we took on the first ‘Avatar,’ with untried technology and a whole new way of telling a story,” Cameron says. “We took that leap then, and we had no idea we were going to succeed like that.”

If the sequel delivers on its promise of a visual spectacle, it could play a lot like Tom Cruise’s high-flying “Top Gun: Maverick,” which landed in theaters 36 years after its 1986 predecessor and has tallied nearly $1.5 billion worldwide since May.

“‘Maverick’ gave audiences a breath of fresh air and showed them what cinema can deliver, and I think that’s what ‘Avatar’s’ appeal is going to be,” Loria says. “The big lesson I took from ‘Maverick’ is that as long as a movie works, audiences are going to turn out. I wasn’t sure if the film industry could deliver that if there wasn’t someone in a superhero costume.”