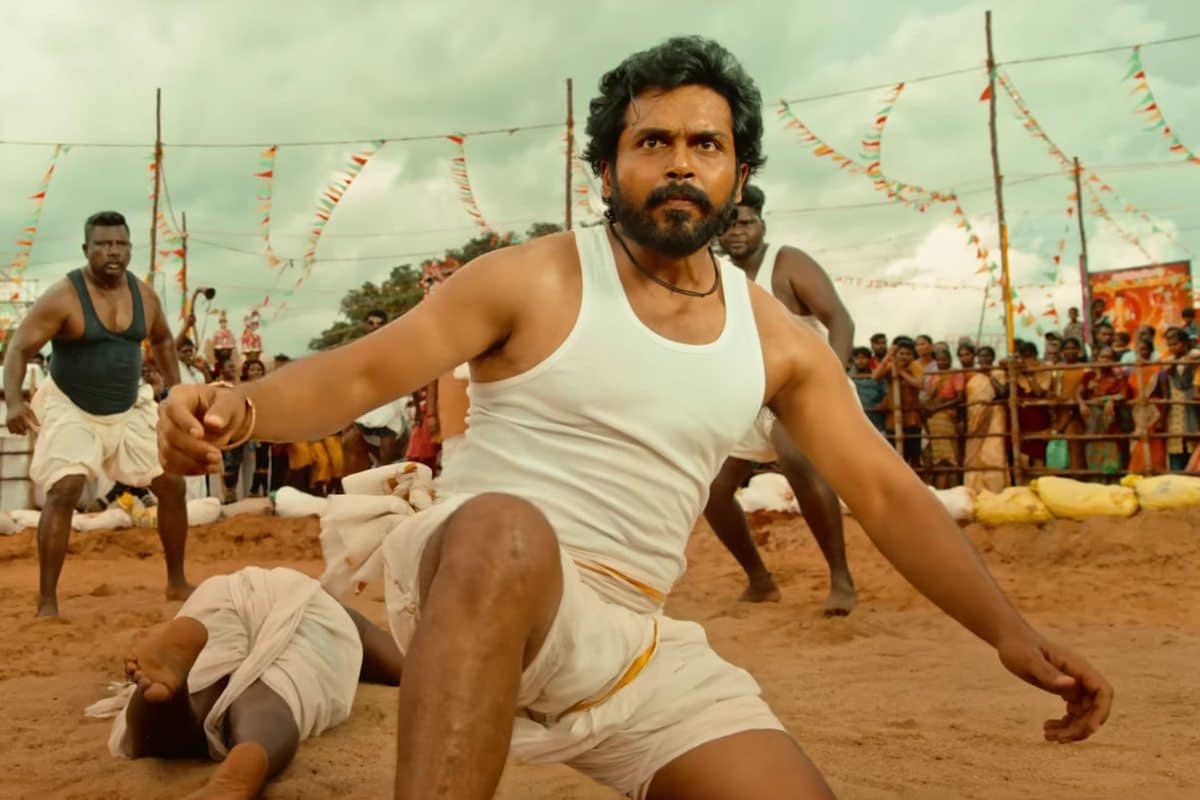 In his previous film ‘Devarattam’, Muthaiah used sexual violence as a prop to further the hero’s arc. In ‘Viruman’, it is domestic violence.

Director Muthaiah’s second film with Karthi is yet another rural masala entertainer where the men flash their underpants and take out their knives at the slightest hint of an argument, and the women are pawns in the ensuing melodrama. In Viruman, Karthi plays the youngest of four brothers in a Thevar family in Theni. The film opens with his younger self running behind his father, Muniyandi (Prakash Raj), determined to kill him. The boy tells the court that he will only stay with his uncle from him (Rajkiran) and that he will murder his father if the latter attempts to get his custody from him.

Cut to the present, and Viruman makes his entry in a wrestling competition. Of course he vanquishes every man at the contest. He also deliberately insults Muniyandi (he is now the tahsildar) who is on stage. We get it. The son harbors a deep grudge against the father, and Muniyandi can’t stand Viruman either. The reason for this is the circumstances surrounding Viruman’s mother’s (Saranya Ponvannan) death. Unlike his brothers, Viruman ca n’t let go of the past. His ringtone from him is ‘Ammana summa illada’; his eyes of her well up whenever he speaks of her. When he has to make an important decision, he thinks about what his mother would have done.

In his previous film devarattam, Muthaiah used sexual violence as a prop to further the hero’s arc. In Viruman, it is domestic violence – it is not just the mother who suffers, but also the daughters-in-law of the house, who have no agency. They are married to men who are under their father’s thumb, and have to put up with ill treatment. My interest was momentarily piqued; focusing on the women characters and their lives in a suffocating, patriarchal household would be something new in such a template.

But clearly, that was too much to ask. The talented Saranya comes and goes in a flashback. For the rest of the film, she is a photograph. Issues like dowry and sexual assault are tossed around, but only to underline a male character’s flaws or heroism. The bad men use ‘pombala’ (woman) as an insult; the good men think a ‘pombala’ is a ‘pokkisham’ (treasure). None of them think a ‘pombala’ is human, and can do more in life than stand around witnessing their endless clashes.

The film is resolutely about Viruman vs Muniyandi, with each trying to get the better of the two. Prakash Raj plays the evil Muniyandi with ease and Karthi is reliably good. But there is no tension in the screenplay, because you know who is going to win in every encounter. The only time Viruman can lose in any combat is when he allows it to happen. Doesn’t matter if it’s two men or twenty. None of it feels original.

This is Aditi Shankar’s debut film and her character Thenu seems closely inspired by Priyamani’s Muthazhagu from Paruthiveeran – from the look to her personality. She is introduced as a fiery young woman but again, it doesn’t amount to anything; all she seems to want out of life is to preserve her sister’s marriage de ella at any cost. Aditi dances well, but the role is underwritten and a bit of a cliche by now.

Muthaiah is always altering the sensibilities of his film to his convenience. This is a small town where a young woman can have no aspirations other than marriage; but this is also a small town where a young woman can kiss a man on the lips in front of the panchayat because it makes for a good interval block. There are plenty of proverbs and word play woven into the dialogues, some of which can be entertaining. Soori’s comedy continues to be mediocre though he’s more restrained in this film compared to his previous outings of him. GM Sundar is wasted in the role of a corrupt MLA.

Most films on family feuds set in rural areas are ultimately about kudumba passam (family love). Viruman would have been interesting if it had broken out of the formula. It takes a fun, but only to reach the same place by a much longer route. Viruman has three brothers, but I couldn’t remember any of their names at the end of the film, considering how insignificant they are. That says a lot about this tepid kudumba passam film.

Disclaimer: This review was not paid for or commissioned by anyone associated with the series/film. TNM Editorial is independent of any business relationship the organization may have with producers or any other members of its cast or crew.

Sowmya Rajendran writes on gender, culture and cinema. She has written over 25 books, including a nonfiction book on gender for adolescents. She was awarded the Sahitya Akademi’s Bal Sahitya Puraskar for her novel Mayil Will Not Be Quiet in 2015.