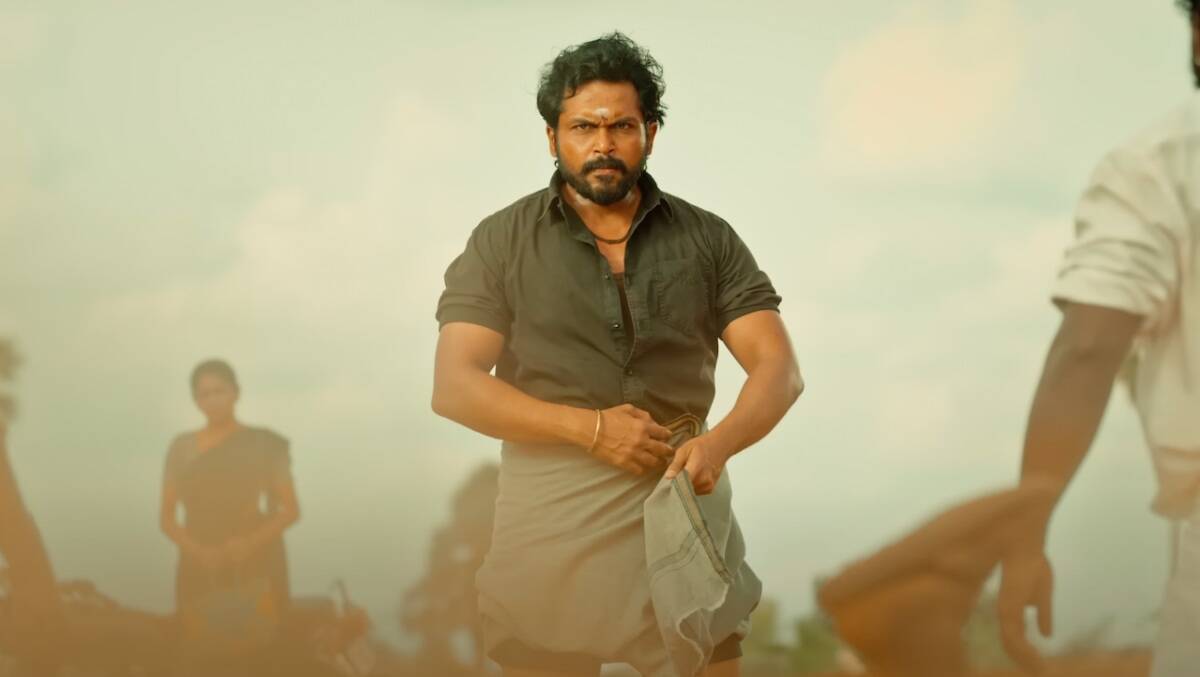 Director Muthaiya has developed a reputation as being one of the few Tamil directors, who can pull off films about rural Tamil Nadu. Yet, his movies of him offer nothing substantial about the villages and the people inhabiting them. The mere aesthetics of his films by him are mistaken for genuine representations of rural life. While Karthi has repeated his look of him from his debut project Paruthiveeran in this film, Viruman is no match for Ameer’s 2007 tragic drama. Of course, Muthaiya doesn’t pretend to make slice-of-life affairs. He merely exploits the ‘rural’ tag to make palatable commercial movies – or in Tamil cinema lingo, mass movies. Like all his previous films by him, Viruman is another straightforward film with moralistic stands and conservative ideas that are welcomed by the masses. However, what makes Viruman and his previous ventures work is that they are fun – many times unintentionally.

Take the interval scene, for example. Viruman (Karthi) and his father Muniyaandi (Prakash Raj) are on the verge of getting into a physical scuffle at the village panchayat. The hero takes out his sharp weapon to finish off his father, while the villagers forcefully pull the two apart. However, Viruman is uncontrollable, and he is moments away from going for the kill. Now, our heroine Thaen (Aditi), a bystander, springs into action and kisses Viruman on her lips bringing the whole panchayat to a standstill. And then comes the interval card. It is Muthaiya’s way of telling us, “Look, how this raging bull has been tamed by the gentle touch of a woman.” It is indeed problematic. Yet, the theater goes berserk.

As far as the story goes, Viruman is about a son who wants to bring down his corrupt and greedy father, who was the reason behind his mother’s suicide. With help from his maternal uncles, Viruman tries to win over his three brothers and prove to his dad that there are things in life that can’t be bought with money or power. The innate issue with Viruman is that it has none. Viruman is conflictless from the start. Things pan out exactly the way you want to, and with an invincible hero, nothing seems to be at stake at all. Ironically, that works in favor of the film.

Instead of becoming a snoozefest, the predictability of Muthaiya’s story makes for an easy watch. Not just the old ideas, the film also harps on the outdated formula of Tamil cinema, where everything ends on a happy note. The seamless performances of Prakash Raj, Karthi, and Aditi, cinematographer Selvakumar SK’s vibrant frames, and Yuvan Shankar Raja’s music are other factors that help in selling this generic venture.

One can go on and on about the ingrained sexism and the romanticization of familial values ​​that teems in Viruman. Also, we wonder when Tamil directors – from Muthaiya to Gautam Vasudev Menon – will forgo the idea of ​​making the wives and girlfriends as stand-ins for the mothers of our heroes. In Viruman, there is a scene where Thaen’s face reflects on Viruman’s dead mother’s photo – it was one of many instances where I laughed at the film.

At the end of the day, the problems notwithstanding, Viruman is a safe film for both the makers and the audience. It doesn’t make you feel much while watching it, nor leaves you with a lot of thoughts about parenting. It is largely a passable movie.