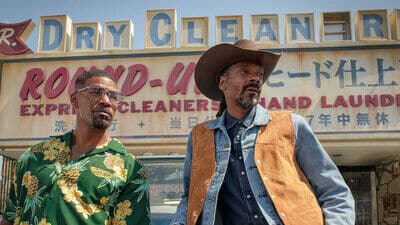 “Day Shift” is a movie in the vein (har har) of “RIPD,” “Shaun of the Dead” and their early dollar theater progenitors: exuberantly goofy programmers like “Fright Night,” “The Kiss,” and “Return of the Living Dead.” These kinds of movies are silly and trashy by nature, deal in familiar tropes/cliches, have a fair share of placeholder dialogue, and never make a move without keeping one eye on the audience’s reaction, and they tend to vary in quality from brilliant and fun to awful but not without charm. This one falls somewhere in the middle of that spectrum, but there’s no denying that it’s made with skill. Everyone in this cast does their best to strike the right balance between seeming in on the joke and acting like all of this bloody absurdity is normal.

The first half of “Day Shift” will seem tediously familiar if you’ve seen the sorts of movies that it’s modeling itself after—gore gag, joke, gore gag, joke, half-assed banter, shootout, etc. But first-time feature filmmaker JJ Perry, a martial artist and former stuntman and stunt coordinator, keeps things chugging along, staging the mayhem with flair and humor, variously channeling “The Exorcist,” Sam Raimi’s “Evil Dead” films, and 1980s Hong Kong kung fu pictures, and setting up every battle in terms of escalating stakes and plans going ahead. There are a few images in the film you can genuinely say you’ve never seen before, such as a drone shot that begins inside of a sports car, flies through an open sunroof, and rises over the road to take in a line of cars and bikes in a high-speed chase. The movie gets much more assured in the second half, when Bud and Audrey’s stories begin to intertwine, and it finds the right balance of goofy deadpan comedy, martial arts-inflected supernatural brawls, gunplay, car chases, and gore.

It seems counterintuitive to say this way, but even though all of the characters in “Day Shift” fill predictable roles (stalwart hero, grizzled mentor, fretful wife, innocent daughter, etc.), each one of them is an individual, and the performers have fun playing them. Foxx is great at everything he does, and he makes a superb Schwarzenegger-like droll action figure here. The performance is reminiscent of Arnie in “Raw Deal,” where he’s the slightly befuddled straight man most of the time even though he’s a badass who can kill ten enemies before they can draw their guns from their holsters. Dave Franco is a standout as Seth, an inexperienced, easily rattled young vampire hunter who approaches his job with unearned arrogance and ends up going through a more complicated, funny, oddly touching personal journey than he or the audience could’ve expected. Snoop plays, essentially, Kris Kristofferson in the “Blade” films, Compton version. His comic pitch of him is impeccable, and with his skinny frame and six-foot-four height, he looks magnificent in a ten-gallon hat and leather vests and dusters, like an animated cartoon version of an Old West gunfighter.