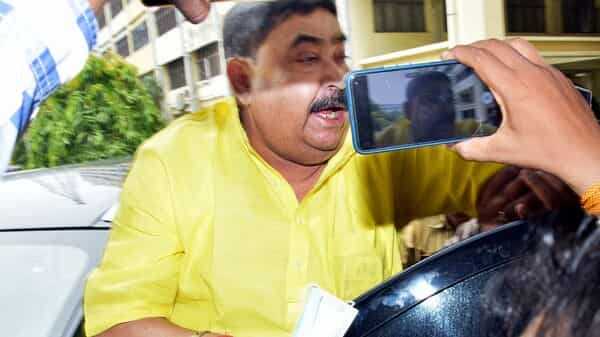 The Central Bureau of Investigation(CBI) on Thursday arrested Trinamool Congress leader Anubrata Mondal in connection with a cattle smuggling case.

Mondal was arrested after an almost hour-long interrogation by a CBI team that arrived at the Birbhum district president’s house early on Thursday, he said.

“We have arrested him for non-cooperation in the investigation into the cattle smuggling scam. We have found Mr Mondal’s direct involvement in the scam. We will question him today and take necessary action as per law,” the official told PTI. The CBI served a notice to the TMC leader under Section 41 of CrPC before arresting him, he said.

Anubrata Mondal was grilled in a room on the second floor of his residence, the official said. He said the CBI would also question the doctor of a Bolpur hospital who had prescribed Mondal bed rest for 14 days. Sleuths of the probe agency are conducting raids at residences of several close associates of the TMC leader as well, the official added.

Earlier, Trinamool Congress leader Anubrata Mondal on Wednesday wrote to the Central Bureau of Investigation about his inability to appear before his sleuths in connection with a cattle smuggling case citing “illness” as a reason, a senior officer said.

The TMC Birbhum district president, who is in his 60s, attached copies of two prescriptions along with his letter and sought two weeks time from the officers of the probe agency to appear before them at its city office, he said.

Mondal’s counsel on Wednesday morning dropped the letter at the central agency’s office in the city, he added.

“We have received a communication from Mr. Mondal in which he informed us about his inability to appear before our officers at our office here today. In the letter, Mr. Mondal has written that he is on total bed rest as per the advice of the doctors and cannot move outside his residence. He has attached two copies of doctors’ prescriptions and requested us to give him two weeks’ time to come to our office,” the CBI officer told PTI.

The prescriptions submitted by Mondal are of doctors from the city’s SSKM Hospital and Bolpur Hospital.

The CBI had on Tuesday summoned Mondal to come to its city office for questioning in connection with their investigation, a day after the TMC leader skipped appearing before its officers.

Mondal had visited the city on Monday but instead of going to the CBI office went to the SSKM Hospital for a check-up.

Doctors at the state-run medical facility had advised him to come back after two months stating that he was only having a few chronic diseases.

After that, the TMC leader straightaway left for his Bolpur residence.

He has been questioned twice thus far by the central agency, which in the recent past also conducted raids at various locations in the district in connection with the case.

Mondal’s bodyguard Saigal Hossain has also been arrested by the probe agency.

The TMC leader, who often made headlines for his off-the-cuff remarks on various issues, has been asked by the CBI to appear before it on several occasions in connection with its probe into the cattle scam. In the past, too, Mondal skipped summonses citing ill health.

Catch all the Politics News and Updates on Live Mint. Download The Mint News App to get Daily Market Updates & Live Business News.