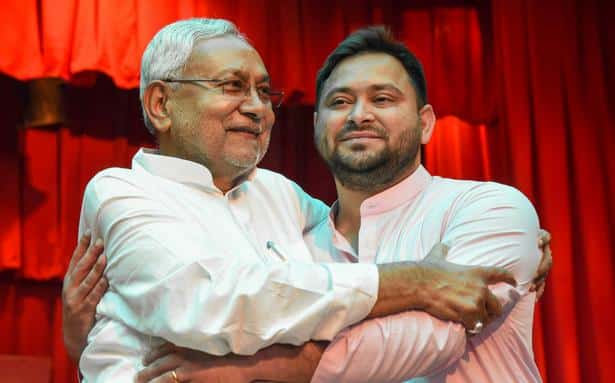 After the ceremony, Mr. Kumar said, “In 2014 Narendra Modi became PM but only time will tell whether he would remain there in 2024”

After the ceremony, Mr. Kumar said, “In 2014 Narendra Modi became PM but only time will tell whether he would remain there in 2024”

Janata Dal(U) leader Nitish Kumar on August 10 took oath as Chief Minister for eighth time and Tejashwi Yadav as his Deputy in the cabinet again at state Raj Bhawan in Patna.

Governor Phagu Chouhan administered the oath to them.

Earlier in 2015, both had taken oath together for the same. Though two years after in 2017, Mr. Kumar played a turncoat and had joined hands with the BJP.

The rest of the cabinet of ministers is likely to take oath later. “The oath of other ministers may happen in a day or two, before the inauspicious month of Kharwans which begins from August 12”, said a senior RJD leader.

Leaders of all seven mahagathbandhan parties were present during the oath-taking ceremony along with the family members of Mr. Yadav.

After taking the oath, Chief Minister Nitish Kumar, while speaking to media persons, said that he would not be there (as CM) in 2024.

“What will happen I do not know but one this is sure that I’ll not be here in 2024”, said Mr. Kumar throwing enough indications that he would prefer to do national politics by that time.

When asked about Prime Minister Narendra Modi, Mr. Kumar said, “In 2014 he became PM but only time will tell whether he would remain there in 2024 or not.”

“I’m not an aspirant for the PM’s post but in 2024 all (opposition parties) should come together”, appealed Mr. Kumar.

On what was the difference between the then PM Atal Bihari Vajpayee and the current PM Narendra Modi, Mr. Kumar said, “Vajpayee had given us so much of love, warmth and respect that we cannot ever forget but the situation has quite changed now” .

When asked about what went wrong with BJP, Mr. Kumar said, “you all know it very well…I was not speaking to you all for the last one and half month. My partymen will let you know everything.”

Mr. Kumar once again asserted that he didn’t want to become Chief Minister in 2020 but “there was pressure from all sides so I accepted the post”.

“You all must be knowing how many seats JD(U) had got in 2015 assembly elections (70 seats) and how much in 2020 assembly poll (43). Why my party was reduced to such a low figure? A lot of things were going on so my partymen decided to snap ties with BJP and I went with their decision”, he said. Earlier, after taking the oath, Tejashwi Yadav touched the feet of Chief Minister Nitish Kumar to seek his blessings.

His mother Rabri Devi, earlier before the oath-taking ceremony set off, told half persons repeatedly that “everything has been forgiven”. She was referring to Mr. Kumar becoming a turncoat in 2017 to join hands with BJP after parting ways with RJD-led mahagathbandhan.

Meanwhile, BJP leaders sat on dharna at BJP headquarters on Wednesday to condemn Nitish Kumar’s “betrayal”. “BJP made him Chief Minister five times but he (Mr Kumar) betrayed us. The people of Bihar will give him a befitting reply for his conduct in time to come”, said senior state BJP leader and Rajya Sabha member Sushil Kumar Modi.

Mr. Sushil Kumar Modi has been close to Chief Minister Nitish Kumar and in NDA governments he has been his deputy in the cabinet.

If party sources are to be believed there would be 16 Ministers, including Dy CM Tejashwi Yadav and Lalu Prasad’s elder son Tej Pratap Yadav from RJD in the new cabinet.

It is also said that as many as 13 leaders from JD(U) would take oath as Ministers in the new Cabinet. Names of leaders from the party like Vijay Choudhary, Ashok Choudhary, Bijendra Yadav, Sanjay Jha, Upendra Kushwaha, Shrawan Kumar, Zama Khan are floating to become Ministers.

Names of Santosh Kumar Manjhi, son of Hindustani Awam Morcha (Secular) Jitan Ram Manjhi from HAM(S) too is being taken as probable Minister in the new cabinet.

“They may not be the part of the government,” said a senior RJD leader.