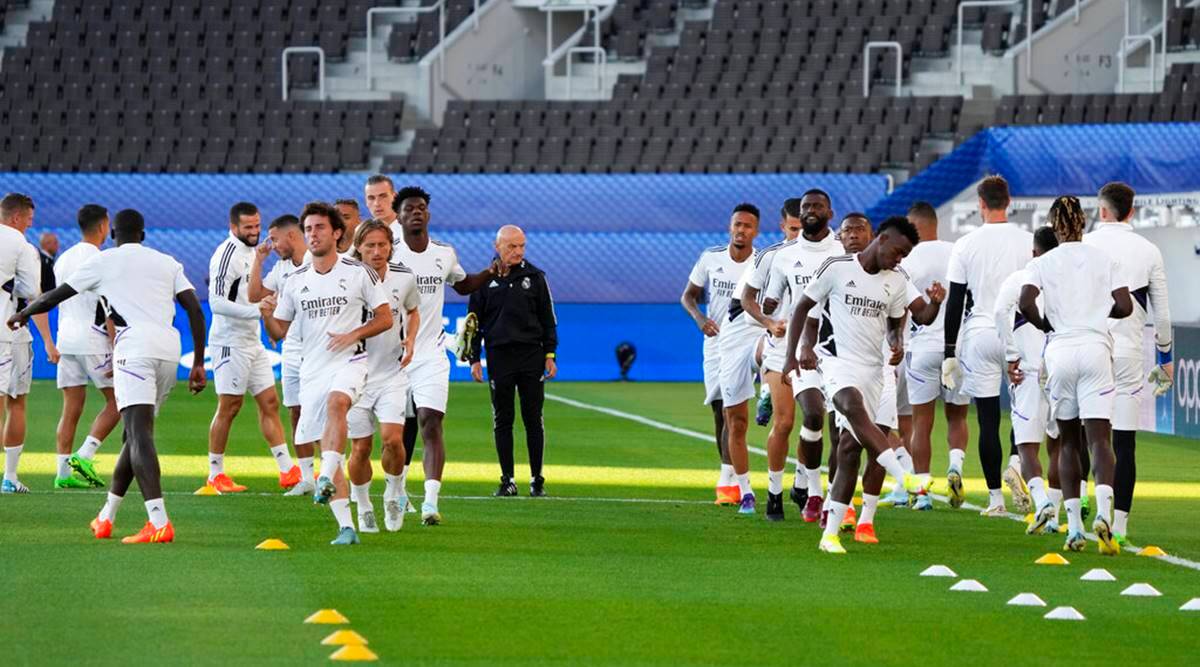 Madrid won the Champions League in its final match last season, and on Wednesday it begins the new season by taking on Europa League winner Eintracht Frankfurt in the UEFA Super Cup in Helsinki, Finland.

It will be the teams’ first competitive meeting since the 1960 European Cup final, when Madrid won its fifth straight European title at the time with a thrilling 7-3 win at Glasgow’s Hampden Park. Ferenc Puskás scored four goals for Madrid and Alfredo Di Stéfano got a hat trick. About 127,000 fans watched the match in what is still the highest attendance for a European Cup final.

Madrid is chasing its fifth Super Cup title, and first since 2017, while Frankfurt will be making its first Super Cup appearance following its shootout victory over Rangers in the Europa League final. That win ended the German club’s 42-year wait for a European trophy.

Madrid ended last season on a high after comfortably winning the Spanish league and overcoming poor performances to advance in the knockout stages of the Champions League. It eventually clinched a record 14th European title in the final against Liverpool.

“We will try to win everything possible this season,” Madrid coach Carlo Ancelotti said Tuesday. “I don’t know if we will be able to do it, we know it will be very complicated. But the squad is very good and I have a lot of confidence on my players.”

The Spanish powerhouse will be mostly unchanged going into 2022-23, led by Karim Benzema following his best season ever. Vinícius Júnior and Rodrygo are also back in an attack that was dominant last season, and the midfield remains anchored by Casemiro, Luka Modric and Toni Kroos. The team’s additions come with central defender Antonio Rüdiger and midfielder Aurélien Tchouaméni.

QUIZ: How much do you know about the UEFA Super Cup? 🧐#SuperCup

Isco Alarcón and Gareth Bale left after their contracts expired, but the club did not replace them despite the disappointment of failing to sign Kylian Mbappé from Paris Saint-Germain. Instead Madrid is hoping for another impressive season up front from the 34-year-old Benzema.

“Right now it’s impossible to replace Benzema,” Ancelotti said. “He is the best striker in the world.”

The France striker was the top scorer in the Spanish league and the Champions League. He scored 44 goals in 45 matches with Madrid, and equaled Raúl González as the club’s second-highest scorer with 323 goals, behind Cristiano Ronaldo (451). He is the front-runner to win the player-of-the-year awards for last season.

1 – Real Madrid have only lost one of their last 14 finals in all competitions, 4-2 in 2018 against Atlético de Madrid in the UEFA Super Cup in the edition played in Tallinn 🇪🇪. invincible. pic.twitter.com/56gzXDf5IX

“I’m not the one to talk about (the awards),” Benzema said. “My goal is to help the team as much as I can each season.”

Benzema scored twice in his two preseason games — a 2-2 draw with Mexican club América and a 2-0 win over Juventus — and did not play in Madrid’s 1-0 loss to Barcelona.

Carvajal’s goal in the 2016 Uefa Supercup will forever be goaled pic.twitter.com/EFqOedfSyC

Madrid will play its Spanish league opener on Sunday at promoted Almería.

Frankfurt’s season has already started. It routed second-division club Magdeburg 4-0 in the first round of the German Cup, then lost 6-1 at home to Bayern Munich in the Bundesliga opener on Friday, when the visitors led 5-0 at halftime.

“On Wednesday we have the opportunity to do better against an opponent that’s just as strong,” Frankfurt coach Oliver Glasner said. “Sometimes it’s good to get a slap in the face so not everyone thinks things will continue like last season.”

Frankfurt had not clinched a European title until winning the UEFA Cup in 1980. It won its lone German league title in 1959, and since then it has won five German Cups, the last in 2018.

Eintracht Frankfurt confirmed that Filip Kostić will not fly with the squad for the UEFA Supercup – as he’s set to join Juventus on permanent deal. 🚨⚪️⚫️ #Juventus

Final details are set to be completed then Kostić will be in Turin to sign the contract. Here we go soon. pic.twitter.com/aFjLdREigX

The match at the Helsinki Olympic Stadium will be the first UEFA club competition final to be held in Finland, though the venue previously also staged the final of the women’s European Championship in 2009.

Semi-automated offside technology will be used for the first time in a European club competition. The new system operates with cameras that can track 29 different body points per player and will allow video review teams to determine offside situations more quickly and accurately, according to UEFA.

The system was tested at the women’s Euro 2022 in England and in the Champions League last season. It was also approved by FIFA for the World Cup in Qatar.