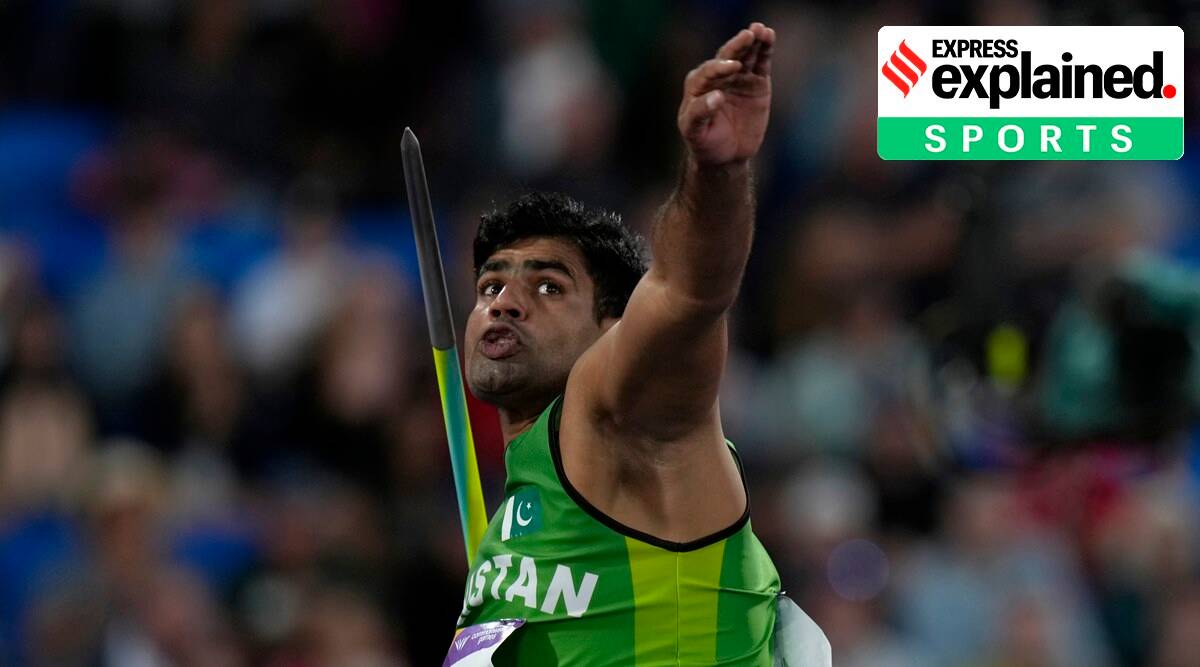 Pakistan’s Arshad Nadeem Sunday gave his country its first javelin throw gold with a Commonwealth Games record mark of 90.18m. Nadeem has crossed the 90m barrier which India’s Neeraj Chopra is yet to breach. Chopra, who skipped the CWG competition due to injury, has his personal best recorded at 89.94m.

On August 7 last year, Chopra had won a javelin gold medal at the Tokyo Olympics to give India its first-ever gold in athletics. With healthy rivalry between the two stars set to grow in javelin competitions of the future, we look at the physics that makes a javelin fly past the 90m ‘gold standard’ distance.

“Although high-school physics says that for maximum range, a projectile should be launched at a 45-degree angle, it is true only when the launch and the target are at the same height,” Dr Arnab Bhattacharya, professor at the Department of Condensed Matter Physics & Materials Science, Tata Institute of Fundamental Research, Mumbai, had tweeted last year.

I have explained that in javelin, the launch is 2m above ground and the target is at the ground and there are many aspects of aerodynamics involved. This makes the optimal angle 36-degrees.

The javelin must dip at all times in flight and the tip must hit the ground first.

“Looking purely at the physics of the throw – for the javelin, lift from the air is an important factor. Lower air temperature means slightly denser air, which gives slightly more lift that enables a slightly more distance covered. These effects will be small, but remember that in the Olympics you can break a record or miss a medal by just a few mm,” he explained.

The size, shape, minimum weight, center of gravity of the javelin, surface finish (no rough paint, dimples etc), and allowed throwing techniques are all regulated by the International Association of Athletics Federations, the professor highlighted.

“Javelin throw is a rare event where the IAAF intervened to change rules to force throw distances to be reduced, as changes (based on physics!) such as hollow, designer cross-section, surface texture made javelins more aerodynamic,” he tweeted.

Asked if there are any more changes that can be made based on physics, he explained that the IAAF has taken care to avoid “high-tech gimmicks” that can boost performance – “which would be available only to people who could afford to put in the resources to do all kinds of aerodynamic simulations and make ‘better’ javelins…”

“I’d really love to see if someone can figure out a different way to throw it which makes the javelin go further. Of course, in today’s world, given that you have access to powerful computation and all sorts of sensors, it would again be easier for well-resourced participants to play around with different throwing styles and see what might work better, while still being within the extant rules,” he added.