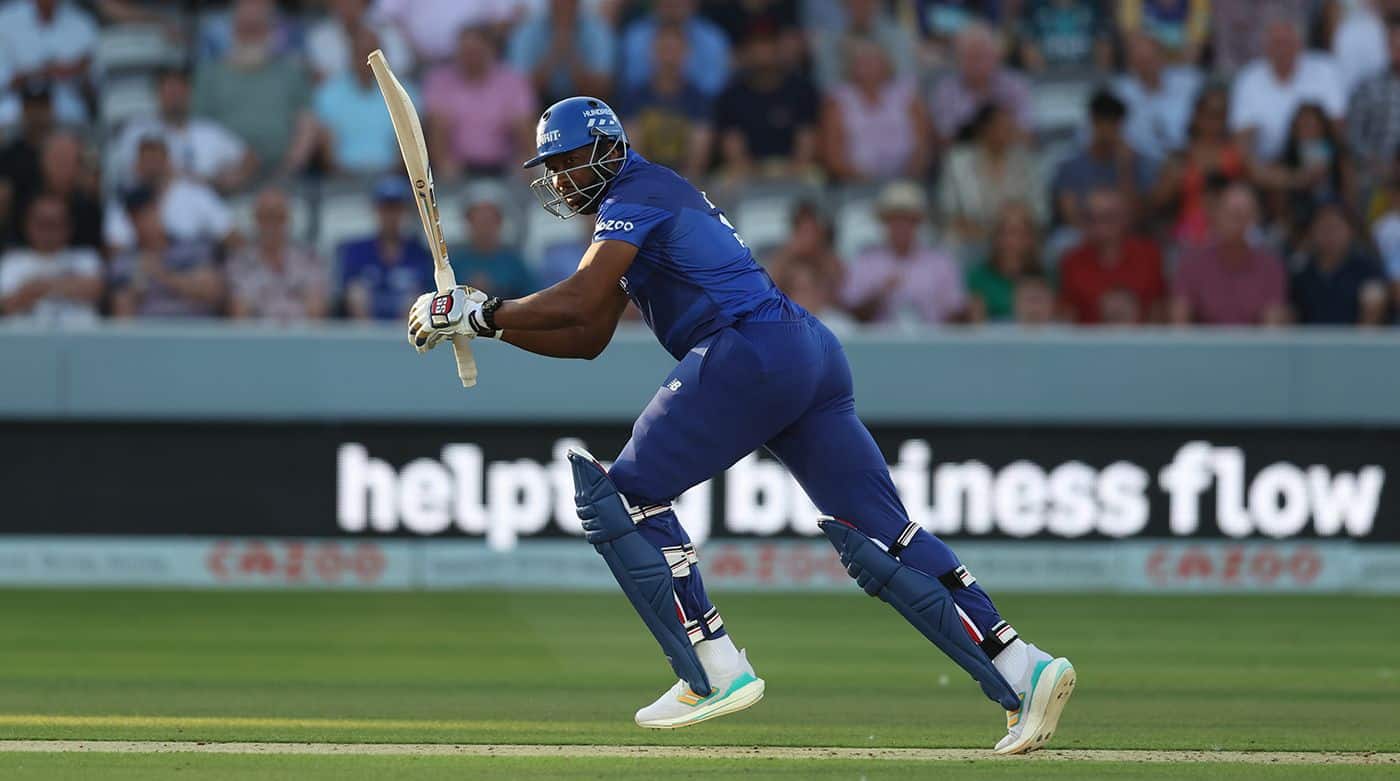 There’s one ball left in London Spirit’s innings and Kieron Pollard is on strike. It’s his 600th T20 game from him (like it or not, the Hundred counts) and there is an expectant buzz around Lord’s as Jos Buttler sets the field, while Fred Klaassen takes a deep breath at the top of his mark.

Pollard turned 35 in May, shortly after his international retirement, and has been struggling for fitness and form. Since the start of the year, he’s averaging 25.92 and striking at 123.05 in T20 cricket, pedestrian numbers by his lofty standards. He was due to play the Blast for Surrey but managed only six games before he was ruled out through injury, and needed surgery on his knee to recover in time for the Hundred.

There is a sense that Pollard’s star is waning, and he is no longer the gun fielder who used to prowl at long-on for Mumbai Indians in the IPL. During the finale of London Spirit’s opening game against Oval Invincibles, Danny Briggs chipped one over him at mid-off which he would have leapt over his head and plucked out of thin air in his heyday; earlier, he had shelled out a relatively straightforward chance at point.

But reputations are hard earned, and Pollard retains the ability to put fear in bowlers and captains like few other batters. On Monday night, Buttler spends most of Pollard’s innings stood at straight mid-on, with a long-on and a long-off behind him in order to negate his ability to hit down the ground; instead, Pollard brings out the long handle and swings hard, racing to 28 off 10 balls as he muscles the ball into the leg side.

The field that Buttler sets for the final ball is extraordinary, a modified version of one that MS Dhoni has often used against him in the IPL. Fields in the death overs of white-ball games almost always follow a pattern, with occasional changes depending on whether a batter scoops or hits down the ground, but Pollard’s aura, developed over the course of a 16-year short-form career, throws everything off.

What follows is pure theatre. Pollard takes guard a foot outside leg stump, then jumps across to cover his off stump as Klaassen is running in. Just before he releases, he adjusts again, shifting into a power-hitting stance: his back foot is right in front of the stumps, deep in the crease, and his left foot is a foot outside his leg stump once again .

Klaassen’s yorker is pretty much inch-perfect, sliding in towards leg stump from over the wicket, but Pollard has won the battle of wits. He swings cleanly with a straight bat, his back foot giving way towards the leg side like a ballroom dancer’s. Andre Russell thinks momentarily that he might be in the game at long-off, then watches the ball skew away into the small gap between the Pavilion and the Warner Stand as the crowd cheer.

“I never set out to play [600] games or to play this format for this period of time, but it’s something that came along and I’ve enjoyed it so far”

“Before that, he was bowling length deliveries,” Pollard explained two hours later, speaking to ESPNcricinfo. “When I hit him for six, next ball he went full and hit my pad. Knowing that [the leg side] was the big side, I just thought that was what they were going to do. They had the guys straight so I knew he was going to come into my pads: you want to put guys where you think the ball is going to go.

“Sometimes you just work out what’s going to happen,” he said, with the knowing smile of the format’s most experienced player. “He was looking to go into my pads. He missed the yorker by just a little bit and for us at the back end, we just want the bowler to miss by that little bit and be in that good position to get a maximum.”

Klaasen’s reaction told the story, hiding a muffled smile. If he missed his yorker at all, it was by a matter of centimeters. “If you don’t get your length quite right, he’ll hit you for six,” Phil Salt, Originals’ wicketkeeper, said. “It’s all well and good us having the plans there, but you need to execute.”

All told, Spirit made 55 runs off 30 balls with Pollard at the crease; his own contribution was 34 not out off 11. In the chase, Originals knew they were up against it on a two-paced pitch and never got close: this was not just an exhibition of power-hitting at the death, it was a match -winning innings too.

This was only the fourth innings Pollard has played at Lord’s in his career, but there was something similar in the first when he hit seven fours and seven sixes in 89 not out off 45 balls for Somerset a dozen years ago, landing one straight six onto the Pavilion roof. He has always been an incredible athlete but as his body slows down-“age is not good for us,” he said with a grin-he is embracing his status as an entertainer.

“It’s an achievement in itself, 600 games in any format,” he said. “I’ve never set out to play this many games or to play this format for this period of time, but it’s something that came along and I’ve enjoyed it so far. Let’s see what happens as I go forward. I’ll continue to try and work hard and enjoy playing cricket with a smile on my face. As long as the body holds up, I’m going to see how long I can go.”

The Hundred have rolled out the gimmicks this year in the form of virtual-reality avatars, Minions in the stands and, on Monday night, Harry Kane in the commentary box in London Spirit kit after flipping the coin at the toss. Pollard’s innings was a reminder to the ECB of a simple truth that should underpin their competition: artificial entertainment will never compete with the thrill of live sport.

Matt Roller is an assistant editor at ESPNcricinfo. @mroller98