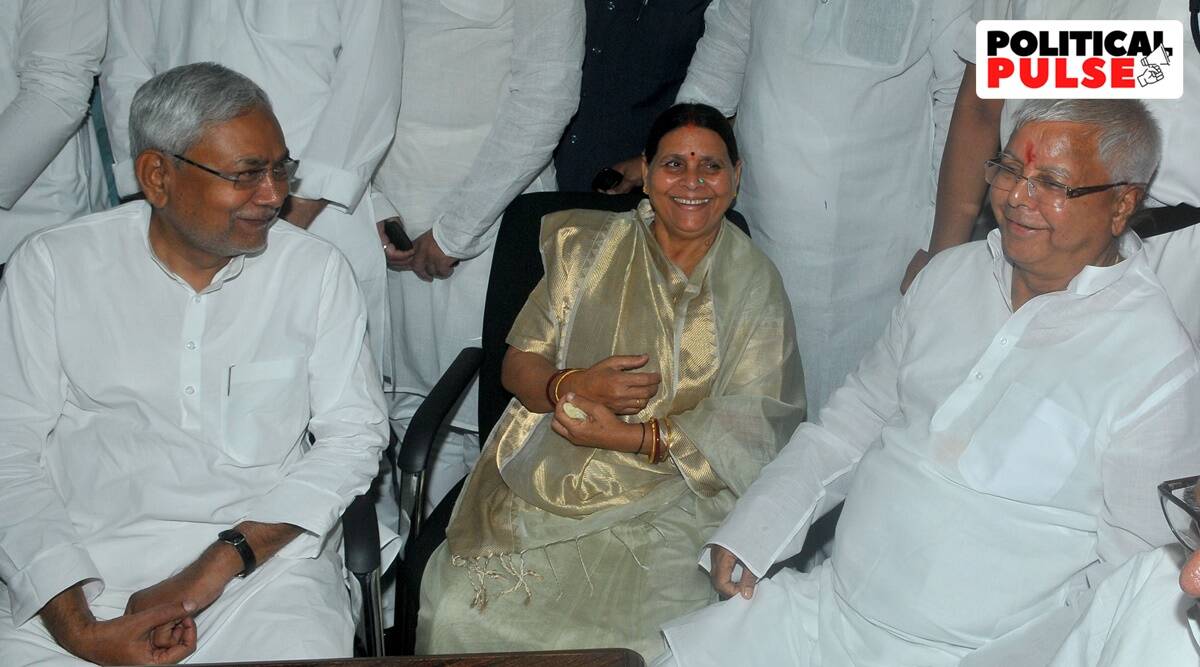 Kumar had ended the party’s alliance with the BJP once earlier — in 2013 — and in the run-up to the November 2015 Assembly elections joined hands with arch-rival Lalu Prasad Yadav’s Rashtriya Janata Dal (RJD) and the Congress and some other smaller parties to form a “Mahagathbandan (grand alliance)”. Ever a consummate politician, Kumar broke away from the Mahagathbandan in July 2017 over corruption charges against then Deputy CM Tejashwi Yadavsaying he had “zero tolerance for corruption” and that the RJD had “no answers” ​​to corruption charges following the Central Bureau of Investigation’s (CBI) raids on Lalu’s family.

Earlier that month, the CBI booked Lalu Yadav, his wife Rabri Devi, Tejashwi, and five others in connection with alleged favors that the RJD chief gave to a company while he was the railway minister. The company allegedly received tenders for the maintenance of two hotels run by the Indian Railway Catering and Tourism Corporation (IRCTC). The CBI conducted raids at 12 locations in Patna and elsewhere, including at Lalu’s residence, after booking the eight in the IRCTC case. The Enforcement Directorate (ED) followed this up by registering a case of money laundering in the matter. The two central agencies filed chargesheets in the case in 2018 and 2019 respectively. The case is currently committed to trial.

In the years since Nitish went back to the BJP, Lalu Prasad Yadav has been convicted in five fodder scam cases while his family is standing trial in two separate cases. “As everyone can guess, the cases against our leaders are part of political vendetta. In any case, we respect the judicial process,” said RJD spokesperson Mrityunjay Tewari.

According to the CBI, in 2006, when Lalu was the railway minister in the first United Progressive Alliance (UPA) government, he allegedly favored Patna-based Sujata Hotel Pvt Ltd for the maintenance of two Indian Railways hotels in Ranchi and Puri. The agency claimed that a conspiracy was hatched in pursuance of which the hotels were first transferred to the IRCTC and later on its operations, maintenance and upkeep were leased to Sujata Hotel. The agency alleged that as a quid pro quo Rabri Devi and Tejashwi got prime a prime piece of land in Patna at a throwaway price.

“Allegation is that during this process, tender process was rigged and manipulated and the conditions were tweaked to help the private party (Sujata Hotel). In return, three-acre land in western Patna was given to Delight Marketing — run by Sarla and Prem Chand Gupta — at a very low cost, and subsequently between the period 2010 to 2014, this land was further transferred to another company Lara Projects owned by family members of Lalu Yadav,” CBI alleged.

According to the central agency, this transfer — which was effected through the purchase of company shares — was done at a very low price. Delight Marketing owned the land that was valued at over Rs 94 crore at market price and over Rs 32 crore at the circle rate. The entire company was sold to Lara Projects, owned by Tejashwi and Rabri, for Rs 65 lakh, the CBI said.

A day after the CBI conducted searches in the IRCTC case, the ED carried out searches at premises associated with Lalu’s daughter Misa Bharati and her husband Shailesh Kumar in a case of money laundering registered against their company Mishail Packers and Printers. The ED has since attached a farmhouse belonging to Misa in Delhi and chargesheeted her and her husband from her. The trial in the case has begun.

The ED case pertains to more than Rs 8,000 crore laundered by two market entry operators identified as brothers Surendra Jain and Virendra Jain through a maze of shell companies. They got to know about the Jain following the arrest of chartered accountant Rajesh Aggarwal on May 23 that year. During the probe, it emerged that Aggarwal had provided accommodation entries not only for the Jains but also for Mishail Packers and Printers. Further probe revealed that the companies floated by the Jain brothers had had suspicious transactions with Mishail Packers and the money moved was allegedly used to buy farmhouses.

This May, the CBI booked Lalu and his family members in a fresh case of corruption. The agency also launched search operations at 17 locations on premises associated with Yadav and his family members, including Misa Bharti. According to the agency, the case is based on allegations that when Yadav was the railway minister he took plots of land in return for giving jobs to people in the railways. the CBI arrested Lalu’s former Officer of Special Duty (OSD) Bhola Yadav on July 27, claiming that he was the key man behind the deals.

The agency has alleged that 12 people were appointed to Group D posts in the railways from Patna at the time. In lieu of these appointments, the RJD chief’s family got seven plots of land in the city and elsewhere for a pittance. All these plots belonged to the families of those 12 people. According to the CBI, this way, Lalu’s family acquired over one lakh sq ft of land for Rs 26 lakh. The circle rate at the time put the cumulative value of the land at over Rs 4.39 crore.

Sixteen people have been named as accused in the FIR, including Lalu, Rabri Devi, Misa and another of the RJD chief’s other daughters, Hema. The CBI initiated a preliminary inquiry in the case last September.