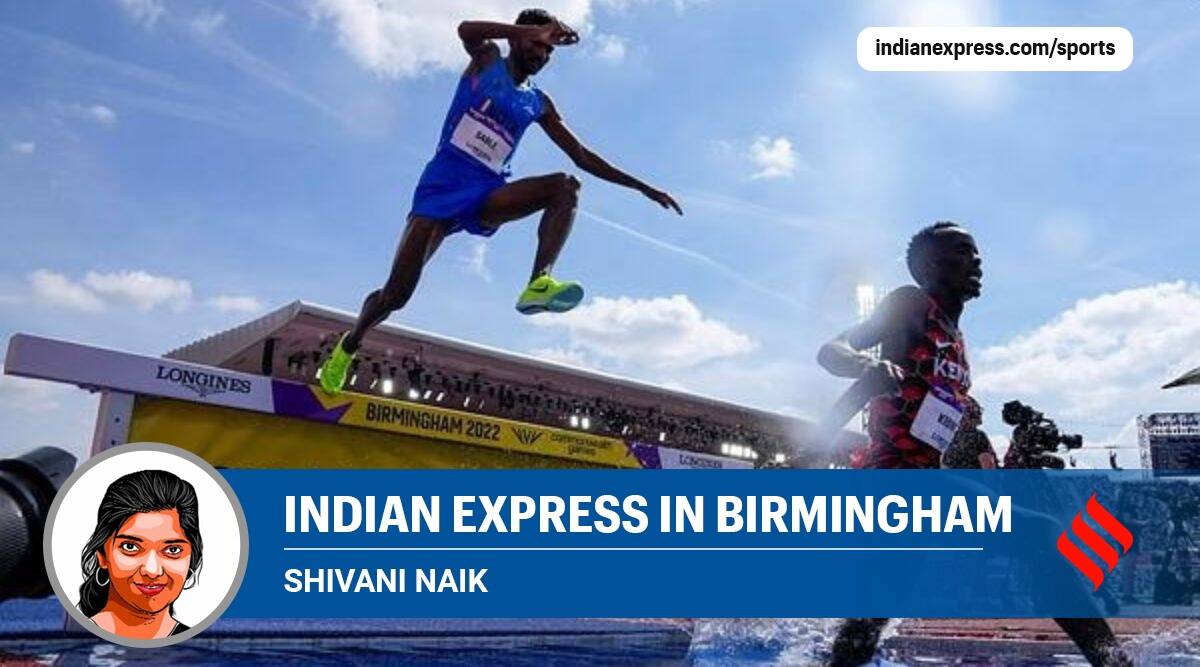 The gushing praise for the rising star of Avinash Sable came from Kenya’s Olympic and two-time world champion Conseslus Kipruto, the first of two from the long-distance superpower that the Indian audaciously left behind while claiming a historic Commonwealth Games silver in the 3,000m steeplechase.

The third Kenyan had a gold dangling around his front eventually, but not long before that he had Sable breathing down that same neck, making the hair on his back stand and his heels fleeing getting clipped by Sable’s snapping toes.

Rewriting India’s national record for the ninth time – could well be the n-th time – with a timing of 8:11.20, Sable struck at the heart of steeplechase royalty’s dominance. Giving one right fright to Abraham Kibiwot, the 2018 Gold Coast silver medalist and one of the season’s top runners, also considered Kenya’s heir apparent, Sable stalked the Kenyan Three, who led the race the first 2,400m. Once he made his move on the sixth of seven-and-a-half laps, the World’s bronze medalist from a fortnight ago, Conseslus, saw his medal hopes dissipate.

#Super Saber does it again!

Personal Best & National Record effort of 8.11.20 from Avinash Sable wins him a #CommonwealthGames2022 Silver Medal in the men’s 3000m steeplechase @birminghamcg22 #India 🇮🇳 is proud of you Champion!

“Sable’s such a strong guy,” Kipruto, who faded off to sixth and most likely paced the younger Kenyans Kibiwot and Serem (8:16.83), would say of Sable. “Since the Worlds we all viewed him as the strongest challenge here and I’d been thinking about how to stop him. He’s in such a good shape and we knew he would give us a fight. He’s also a smart guy. He ran his own race, with the same focus, and did not bother about others.”

What Kipruto was praising Sable for was the precise thoughts that haunted the Indian’s last fortnight, after he finished a disappointing 11th at the World Championships. He would fly out of Oregon and return to Colorado with coach Scott the noon after, very distracted.

Having predetermined that he would lurk behind at Oregon, hanging back had backfired disastrously as the race pace slowed down and then he found himself heeled in and boxed into a lull, where his timing fell to a crawl. The flopped strategy played a big role in the two-week turnaround, as it unshackled him off all respect for following the pace of the lead pack. Oregon could be said to be the nadir – a rock bottom that was deep and wide, a trough that drove him to so much angst, he bolted out of the barn gates at Birmingham’s Alexander Stadium that he slashed at the Kenyan halo that had held him back.

On Saturday, at 10 minutes to noon local time, Sable would start snapping at Kenyan heels, though he wasn’t admittedly even bothering to check where those heels were. “I just decided and planned for a medal here. I knew I would need to beat all Kenyans if I wanted a medal,” he would say.
He would lie fourth for two-thirds of the race, but always in the peripheral vision of the front pack. Never losing sight of his own steady pace, clocking an average speed of 21.7kmph.

At the 2K mark, he knew he had to push gears. The Kenyans knew he was breaking free, and he made a clean cut in the next lap. “I sped at 2 km and tried to go into the lead. But the last water jump and hurdle were mistakes.” Briefly, Kibiwot leaned a little outward and pinged too close in Sable’s lane, and the sudden misdirection seemed to confuse the Indian a little. “I didn’t know which way he would go so I got confused. Won’t happen next time, it was a mistake,” Sable would say.

The stadium announcer would keep calling him Sabel. Like table. I will know Everyone heard the Sable rattle around the packed stadium, as the Kenyans were challenged.

But the last hurdle was also a nervous stutter, though he ran the leader close – to within 0.05 seconds, and finished with a redeeming silver. “Microsecond se gold reh gayaa (Missed it by microsecond). I wanted to hear our national anthem. I’m sorry I couldn’t today, but I’m happy with the medal,” he would add.

“I stick to my plan. I had blundered following others at Worlds. I won’t make the mistake again of slowing down because others decided had.”
Yet, it was 15 sleepless nights, where he questioned everything about himself. “You start wondering why you even run if you can’t win despite working so hard. I always believed hard work is bigger even than destiny and luck. But I couldn’t understand why I didn’t get a result at World’s,” he recalled.

Desperately seeking answers, he called up his nutritionist wondering if he was eating wrong. He asked his coach a hundred questions about what was wrong with him. He wondered if practicing was a waste, but he trained hard anyway.

“I was sent to the USA to train by those supporting me for 4-5 months. Even after I failed at World’s they told me it’s not a big deal. But I was angry at myself. So I thought of it from every angle, ”he would describe his stormy state of mind. Senior players received calls asking them to analyze his mistakes. All that masochism finally yielded a result.

“I thought if hard work doesn’t give medals nothing will. Thankfully people trusted me.” He was especially bothered about those that had funded his international trips and he might’ve been wondering if he was worth the effort. “I didn’t want them to think I’m not worth their trust.”

A quiet, reserved person he might be who keeps to himself. But those around him know of his quiet confidence in his own abilities to challenge the elite of the world. “I wanted to prove it’s not just the Africans – Kenyans and Ethiopians who win in long-distance races. An Indian can win too,” he said. From the ashes of defeat, Avinash Sable welded himself a Commonwealth Games silver in a way that even triple-teaming Kenyans couldn’t quite shake him off.