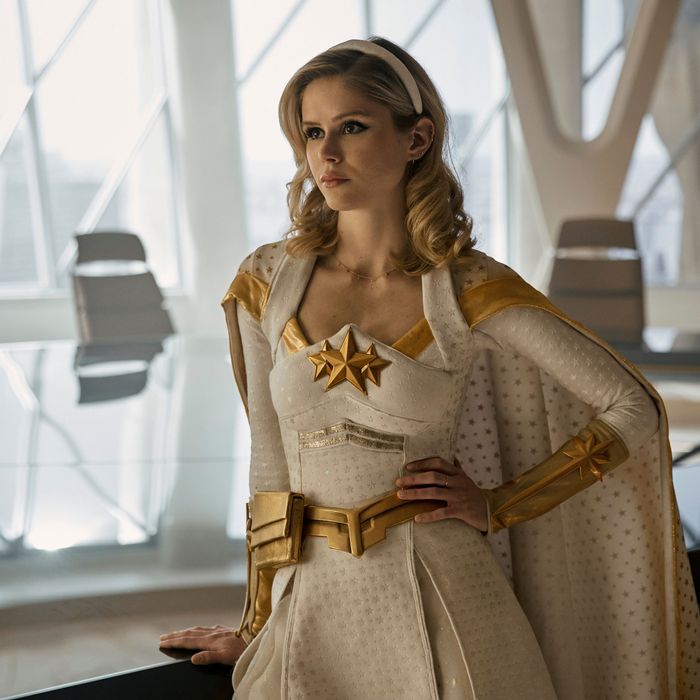 “Herogasm” feels a bit like a mini-finale: an early climax for season three, with most of its major stories coming to a head. These are the fireworks we were promised last week, and they make for an exhilarating watch.

Of course, this isn’t just 60 minutes of crazy super sex. The episode begins with the characters scattered, then quickly but logically sets up their inevitable coming together (pun intended). Homelander sends the Deep to scope out the situation after they see the cam footage of Soldier Boy outside the late Crimson Countess’s hideout and figure out he must be eliminating each of his old teammates from him. Black Noir would’ve been Homelander’s initial choice; after all, he was on Payback with Soldier Boy, so he probably has some insights about the man. But Noir flees Vought early in the episode, brutally ripping a tracker out of his own wrist so he ca n’t be found. Perhaps Noir’s history of him with Soldier Boy is even darker than we realized.

It’s that disappearance that really shakes up Homelander, combined with his insecurity about Soldier Boy. Homelander may be at the top of the power rankings right now, even more so than usual, but that only means he has farther to fall. He actually feels at his most vulnerable from him in “Herogasm,” confused and hurt by his most loyal companion’s absence from him and feeling like a fraud in his new position at Vought. “I want them to love me,” he pathetically admits in a conversation with himself in the mirror. Going full Norman Osborn, he envisions mirror-Homelander as the cold-hearted, confident Homelander he wishes he could be — the Homelander without a trace of humanity.

The Deep and Cassandra were right in their prediction about Soldier Boy because Butcher and Hughie have agreed to help him hunt down everyone responsible for his captivity in Russia — in exchange, he’ll take out Homelander. If he’s the Boys’ best shot at cutting the head off the snake, though, he’s also their biggest wild card. No amount of booze and bennies seem to be enough to hold off the traumatic memories that keep coming back to him and causing ten-minute explosive blackouts.

It’s that type of collateral damage that keeps Starlight and Mother’s Milk from embracing Butcher’s whatever-it-takes ideology. MM witnessed it firsthand as a kid when Soldier Boy hurled a Benz into their Harlem home and killed his grandfather, leading to his father’s long legal battle with Vought and eventual death (and the development of MM’s OCD). Ella’s own comfort with playing dirty gets tested in this episode when Victoria Neuman proposes they partner up, with Ella’s Starlight lending her influence to Ella’s Neuman’s policy goals and Neuman helping out with Homelander. This feels a bit abstract to me as a potential deal — what exactly is Neuman suggesting, and should Starlight considers it more seriously? — but Starlight probably makes the right move in turning down Neuman’s offer. She wants to do this right way, and Neuman could never be a trustworthy ally.

It’s been interesting to see season three shift the focus of that central dilemma of the series: do the ends justify the means? Before, it was largely Butcher and Hughie who represented the opposing views. Now, Butcher and Hughie are on the same side, and it’s Starlight and MM who are realizing they can’t continue to protect Vought’s biggest lies and compromise innocent lives. That duality becomes the focus of the second half of the episode when everyone ends up at a mansion in Vermont.

One of the oldest antagonistic relationships of the show comes into play when Hughie nakedly teleports inside and runs into A-Train, the guy who killed his girlfriend. Earlier in the episode, Ashley rightfully pointed out A-Train’s hypocrisy in demanding justice for his brother despite killing his fair share of innocents himself; now, he finally has the frame of reference to properly appreciate the consequences of his own actions and apologize. He may still be an asshole, and he certainly deserves that punch from Hughie, but at least he understands the soul-crushing feeling of a personal injustice being swept under the rug.

Like almost every main character this season, A-Train is tired of playing fair — so when he does find Blue Hawk, he grabs him by the foot and takes off running for the first time in a year, dragging the man facedown behind him as the road flies him at super speeds. It’s one of the gnarliest deaths of the series, to me, because it’s the type of vivid pain that you can really imagine and wince at.

As promised, Soldier Boy does get his payback on the TNT Twins. But it’s not just them; the music triggers his PTSD worse than ever, and we witness yet another blackout explosion, this one killing 12 people and wounding many more. In the rubble, the long-awaited faceoff happens: a battle between Homelander and Soldier Boy, with Butcher and eventually Hughie coming in to assist.

TheBoys is often so focused on satire and world-building that straightforward superhero battles are few and far between. But that makes it all the more exciting when it does happen, when the show decides to have its cake and eat it too. And the Butcher-Homelander-Soldier Boy fight is everything I hoped it would be, the type of scene I feared wouldn’t happen until the finale.

There’s Soldier Boy calling Homelander a cheap knockoff and Homelander saying, “No. I’m the upgrade.” There’s the pleasingly equal playing field, with Soldier Boy getting in some big hits until Homelander inevitably overpowers him, allowing for Butcher’s rescue. There’s the moment when Butcher and Homelander each shoot lasers at each other, and the lasers meet in midair. (I’d been hoping for a Beam-O-War from the beginning of that matchup.) There’s MM stumbling in to get his long-awaited revenge on Soldier Boy, then backing down because Starlight needs him to help with the injured. And last of all, there’s the conclusion, in which Homelander inevitably escapes — but not without getting seriously pummeled and almost killed by the other three.

We’ve never seen Homelander so mortal before, especially as he gazes into the mirror to look at the big shiner on his face. And while I’m still highly doubtful the character will die before the end of the series, much less in season three, this does feel like the shit-gets-real moment I’ve been waiting for.

“Herogasm” isn’t completely free of the show’s occasional inclination toward stasis; the episode feints at serious consequences in Frenchie and Kimiko’s story de ella when he has to choose between letting her or Cherie live, but Kimiko breaks free de ella only seconds after, before he’s forced to make what would’ve been a fascinating decision. So the story ends a bit predictably, with Little Nina easily escaping and Kimiko learning that her violent inclinations de ella are a part of her de ella, not a side effect of the Compound V. It’s the death of a comforting lie that she indulged for years.

“Herogasm,” in general, feels like a culmination of most of the character arcs this season, upping the stakes for the final two episodes by bringing so many conflicts to a head. There’s Hughie and Annie’s relationship, which ends in a bad place after a naked argument when he finally, bluntly admits how much it sucks always needing to be saved by his girlfriend from him. The state of MM and Butcher’s relationship is just as unclear.

The episode ends with battle lines drawn: It’s Butcher and Hughie with Soldier Boy and Starlight and MM against him. In the final thrill of the episode, Starlight goes so far as to live-stream the aftermath of the chaos, publicly accusing Vought and Homelander of lying and hurting people. She quits the Seven altogether, retiring Starlight and becoming Annie January. In the final phase of this story, it’s not just these characters’ lives at risk; it’s their humanity.

• The episode opens with a parody of the cringe-y early-COVID “Imagine” cover, this time in reference to the recent supervillain attacks. The long list of cameos includes Patton Oswalt and Kumail Nanjiani, but I’m most amused by the actors who, no offense, seem like they could’ve contributed to the original video. Honestly, if you scrambled all of those names up, I’m not sure I would’ve guessed Ashton Kutcher and Mila Kunis were in the parody. (The silent ending card with Black Noir gets the biggest laugh, though.)

• Both MM and Butcher comment separately on how heartbroken Frenchie would be to miss Herogasm.

• Nice to see Love Sausage’s return, with his prehensile tentacle dick making its entrance seconds before he does. Unfortunately, by the end of the episode, Love Sausage’s namesake has become a burnt husk.

• Another casualty of Herogasm: Termite!

• Tied with Blue Hawk for the most visceral violence of the episode: the squelching as one of Nina’s men punches Kimiko repeatedly in her gut wound.

• It’s a bit odd to me, dramatically speaking, that Neuman reveals her hand to Annie and not to Hughie himself since it’s their working relationship that gave the Neuman story stakes earlier this season. I’m looking forward to seeing their confrontation whenever that comes — Annie didn’t pass along any info to Hughie off-screen, right?

• A-Train does have a heart attack from running, but… I’m not super worried?

Keep up with all the drama of your favorite shows!

By submitting your email, you agree to our Terms and Privacy Notice and to receive email correspondence from us.