When it was announced that actor-filmmaker RJ Balaji would remake Amit Ravindernath Sharma’s 2018 Hindi comedy-drama Badhaai Ho, the intrigue was about the filmmaking approach that he would take. This was because the original was both in Balaji’s zone—for its humor and socially relevant theme—and away—for its subtle form. Fortunately, Veetla Vishesham has everything we like about Balaji, making it both grounded and humorous. Ironically, it is serious in nature as well, especially when compared to LKG and Mookuthi Ammanthe other recent films that had him in the lead.

The film follows the life of Ilango (Balaji), whose life becomes chaotic when his middle-aged parents (played by Urvashi and Sathyaraj) announce that they are about to become parents yet again. Facing humiliation and ridicule from society, the family of five, which also includes Elango’s brother and grandmother (KPAC Lalitha), are forced to carefully maneuver their personal and social lives.

During the promotions for the film, Balaji, who has directed the film along with NJ Saravanan, kept suggesting that he looked at this as an opportunity to ‘better’ the original, a standard promise told for all remakes. Thankfully here, this doesn’t become a case of walking in the sky. The makers seem to have been clear about what to retain from the original and what to leave out. Even in scenes that seemed straight out of the original screenplay, something fresh and quirky is added. This happens right from the introduction scene, a shot-by-shot replica that additionally has a great comedic exchange involving actor Deepa Shankar, who plays one of the neighbours.

Many of these new additions include carefully-placed Tamil cinema and pop-culture references. For instance, the famous ‘Naan Seidha Kurumbu’ song from Rajinikanth’s Moondru Mugham appears out of the blue during a hilarious non-verbal exchange. Similarly, Tamil music composers Anirudh Ravichander and Hip Hop Tamizha are mentioned in a joke, adding a layer to its counterpart in the original.

Even music is innovatively used to elicit nostalgia. The best one is in a beautiful scene featuring the elder couple, in which ‘Sippi Irukkuthu’ from Balachander’s Varumayin Niram Sivappu is referred to; the scene ends with a remixed instrumental score of the classic song that only adds to the mood.

story line: When a middle-aged lady gets pregnant, a family of five have to pull themselves together to deal with the complications

Veetla Vishesham is an assortment of many styles of comedy, that also includes tragicomedy, situational comedy, slapstick, and Balaji’s well-known witty counters. As one might expect, the film also tones down its sex jokes and intimacy, probably in a bid to make the subject family-friendly

The way the characters are written also work in their favour. Ilango is written as a struggling character with a conservative approach to things, something that does not go well with his girlfriend (played by Aparna Balamurali). This arc ties with the overall storyline. The power dynamics between the father and the son helps the film’s progression, and the drama in the sequences involving Sathyaraj and Urvashi is, thankfully, sans melodrama. 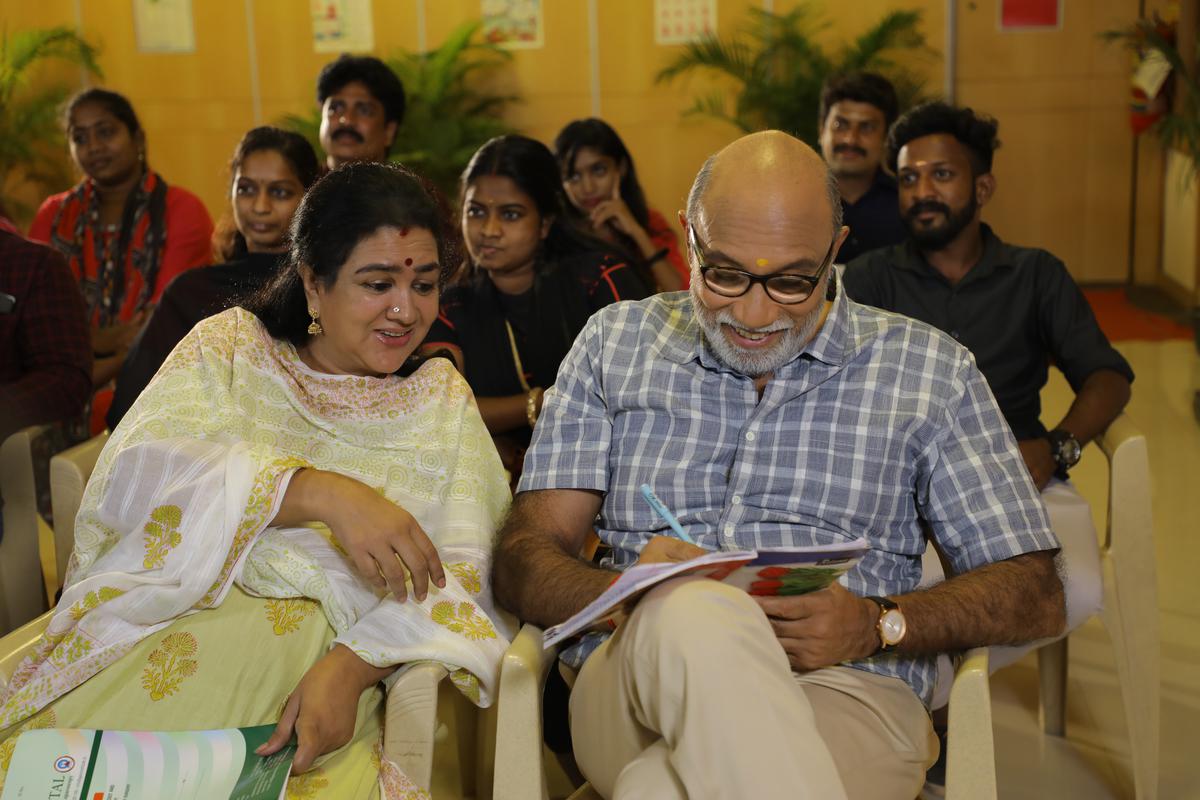 Urvashi and KPAC Lalitha give their everything to the characters and this is best displayed in a brilliant tear-jerker of a scene between these two at the end. One can’t say the same for lead actor Balaji, whose onscreen struggles during sentimental sequences become too apparent.

Beyond comparisons with the original, Veetla Vishesham manages to stand on its own as a well-written drama that takes its theme seriously and as an entertainer that leaves the audience in splits during regular intervals. This is also probably RJ Balaji’s first film with an ‘introduction card’. It is also a film that seems to be introducing to audiences what one might assume as the ‘RJ Balaji Cinematic Universe’ (RJBCU). Will this become the season of cinematic universes in Tamil cinema?