‘Suzhal: The Vortex’ review: A terrific star cast makes this layered series all the more effective

‘Suzhal: The Vortex’ review: A terrific star cast makes this layered series all the more effective


The series created by Pushkar and Gayatri, and directed by Bramma and Anucharan, is a rare piece of literary work that studies a close-knit community, questioning their beliefs and customs without taking a patronizing tone.

The series created by Pushkar and Gayatri, and directed by Bramma and Anucharan, is a rare piece of literary work that studies a close-knit community, questioning their beliefs and customs without taking a patronizing tone.

Narratives mounted against the backdrop of a neighborhood or a small town seem to have tremendous potential for drama. Filmmakers have done this time and again in successful TV shows and movies — globally. It is a winning formula for the simple reason that the main arc of such stories es the community through which we get a sense of the bigger picture that is at play. In Suzhal: The Vortexthe eight-episode series created by Pushkar and Gayatri, the main story arc is about the small-knit community.

A microcosm thrives in this fictional town called Sembaloor, where everybody knows everyone. There is also a serious danger in knowing too much or knowing too little less — Suzhal lies somewhere in between. At least three characters find this closeness of the claustrophobic community and want to leave for a big city. And all three of them share a deep secret buried within their hearts. But Sakkarai aka Chakravarthy (an excellent Kathir) savors this knowledge — of knowing too much about the people and how they behave. This makes sense in his line of work from him. He is a police officer who is now in charge of the case of a missing girl. Shouldn’t it be a cakewalk? As Sakkarai digs deep, he uncovers the sides of the town he wasn’t aware of. “I thought I knew them,” rues Sakkarai at one point. And this is where Sakkarai’s character arc ends.

Plotline: A girl goes missing in a small town that uncovers the deepest mysteries about the people who are after her

I haven’t seen too many TV shows in Tamil. But very rarely do you come across a plot that is so intricately-designed and has richness in writing. Suzhal is so densely packed with details that there is hardly any margin for error or lackluster effort. Even the emotional payoffs are not a doubt. Much of the credit goes to Pushkar and Gayatri for creating the weighty material. Directors Bramma and Anucharan too, have done a remarkable job in staying religiously committed to the written piece of text.

In a way, you could argue that Suzhal is what Sacred Games was for Bollywood — in terms of how two filmmakers came together to realize a complicated piece of writing, though, yes, Sacred Games was more dense. It shouldn’t be too much of an exaggeration to term Suzhal as the best series to have come out in Tamil.

As discussed earlier, the main arc of Suzhal is the community study through which we get to see individual arcs and inner dynamics at play in Shanmugam (Parthipan), Regina Thomas (Sriya Reddy), Nandhini (Aishwarya Rajesh) and Trilok Vadde (Harish Uthaman). Like the title suggests, the series is about the ripple effects when an underage girl, Nila, goes missing on the first day of the Mayana Kollai festival, which is celebrated to worship goddess Angalaamman.

Primary characters and primary conflicts are established in the first episode by Bramma with an overpowering background score by Sam CS. Union leader Shanmugan stages a protest with factory workers against his boss Trilok for asking to check their salaries. Trilok, on the other hand, bribes police officer Regina Thomas to work in his favour. Devotees and the entire town are in the midst of preparation for the Mayana Kollai thiruvizha but the fireworks happen elsewhere. Two separate but interconnected incidents happen: a fire accident breaks out at Trilok’s factory and Shanmugam’s daughter Nila goes missing.

The build up to the plot is terrifying in the first episode. Picture this: it is the first day of the festival and the director cuts this fervor atmosphere and celebratory mood with a character’s introduction, which is a hark back to how Vijay Sethupathi was introduced as Vedha in Pushkar Gayatri’s vikram vedha. The scene is a stunner, if you think about the echo it leaves at the end. This character es the protagonist and es treated as a mythological figure. That’s where their character arc ends.

That is another thing about Suzhal. Every character is fully realized with deep and conflicting emotions. And every character is well-rounded. This is truly an athisaiyam for a webseries. There is not a single dull moment in the series; you think you’re one step ahead in the guessing game but after a point, you put those thoughts aside and engage with it more. To give you an example, a missing girl, a minivan and two families with varying degrees of privilege instantly remind you of Drishyam. But you are wrong. The twist is even better.

Some people might find the tonal shift in episodes three and four a little too convenient. It worked for me and I was just marveling at how Pushkar and Gayatri thought it through before sitting down to write — this subplot in particular. It is not that the series is not without flaws. Sometimes it tends to normalize underage love which didn’t sit well with me. A particular revelation about Shanmugam and Regina’s mini-arc needed better writing. The series would have felt complete even without this bit. Sakkarai’s love track was a drag, though it makes logical sense to why? Lakshmi (Nivedithaa Sathish) is there. Whenever there is a lull, which is rare, the actors make up for it. And all of them are in fine form here. 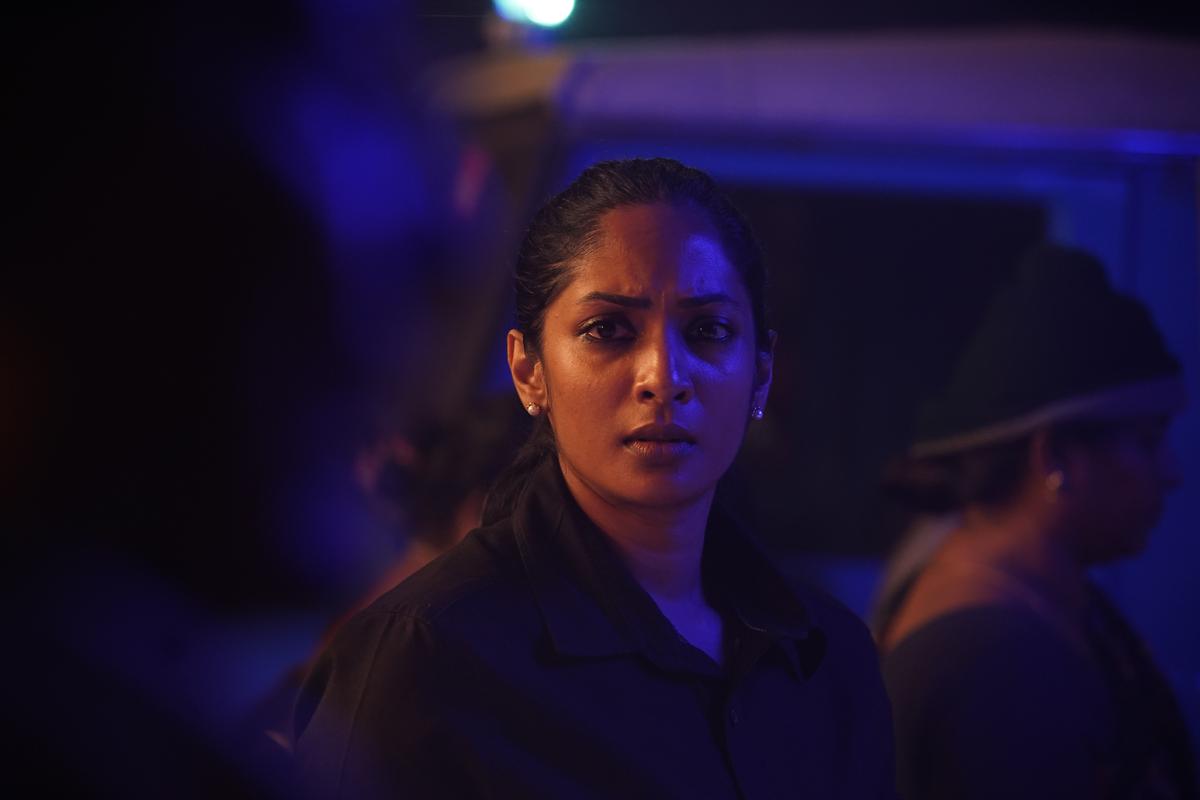 A still from the series | Photo Credit: Special Arrangement

Religion and beliefs bind the narrative together. The creators don’t shy away from pointing out the hypocrisy too. For instance, God-fearing men who worship goddesses are shown to be predators. A mother, who has joined a cult, is reminded of the hegemony of ‘superior’ gods and letting down their own small deities — the same reason Kamal Haasan made Virumaandi in the first place. Suzhal highlights the positive signs of devotion and its downfall too. It never takes one side. Ritual sacrifices are questioned but not judged.

More than beliefs and customs, Suzhal you have got to do with looks, perception and deception. Like we saw earlier in vikram vedhaPushkar and Gayatri, through the series, toy with the audience’s perception of how we see the richly-detailed setting and characters. They are always one step ahead of us. You are never right about anyone in Suzhal.

By the looks of it, someone might look like a stalker but that person might turn out to be the sensitive one. A privileged person might not be what we think they are capable of; a transgender person can have fun without them being associated with prostitution, a Marxist can also take a commission for their benefit, an innocent-looking girl can plot a murder. Consuming alcohol could still be part of a custom. The devil is, as they say, in the details. But the devil is always someone who we know.

Suzhal is the tapestry of events that happen over the course of nine days of Mayana Kollai. On the final day of the festival, when the goddess is on her chariot, you see things clearly. This is a rare series where the sum and parts are equally great.