Polling for 16 Rajya Sabha seats in four States — Maharashtra, Karnataka, Haryana and Rajasthan — was held on Friday and the results for all four States were declared by early morning on Saturday. In Rajasthan, despite the BJP’s efforts to queer the pitch by fielding an independent candidate backed by the party, the Congress won three seats and the BJP one. In Karnataka, amid cross-voting from two Janata Dal (Secular) legislators, the BJP won three of the four seats and the Congress managed to keep a single seat.

In Haryana, the BJP won one seat and the independent candidate backed by it bagged another. The Congress could not secure a win in the State. The BJP also trumped over Maha Vikas Aghadi (MVA) alliance in Maharashtra by winning three out of six seats in a fiercely contested battle. In both these States, the counting of votes began after a delay of over eight hours due to complaints and counter-complaints from the opposing camps.

The counting of votes in the Rajya Sabha elections from Maharashtra began after 1 am on Saturday following the Election Commission’s go-ahead. The counting was scheduled to start at 5 pm on Friday, but it could not be taken up as the BJP approached the EC alleging violation of rules by three MLAs of the state’s ruling alliance of MVA. The MVA, meanwhile, had filed a similar complaint against the BJP.

“The process has started after a wait of eight hours,” NCP State president and election in-charge Jayant Patil said. The ECI took almost eight hours to decide the validity of the votes which were objected upon, said the State Minister.

The poll panel directed the returning officer of Maharashtra to reject the vote cast by Shiv Sena legislator Suhas Kande. 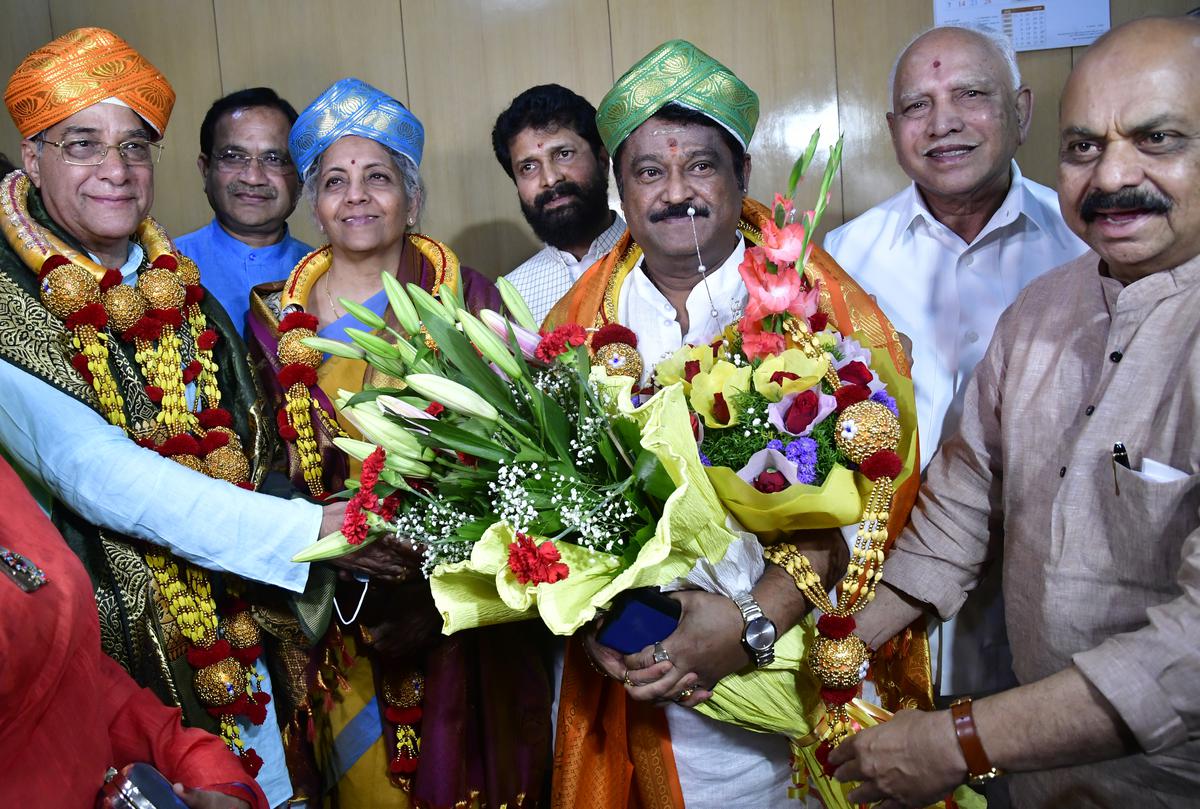 In Haryana too, the counting of votes began late on Friday night after the Election Commission gave the go-ahead, officials said.

The counting was held up following complaints about violation of rules.

Officials said the counting began past midnight after the Election Commission gave the permission to the returning officer to go ahead with it.

The BJP and the Independent candidate backed by it have urged the Election Commission to cancel the votes of two Congress MLAs in the State.

Though these results hold wider political implications in each State, it will have little impact on the Rajya Sabha arithmetic where the BJP will continue to be far ahead of the Congress with 95 members.

In Karnataka, Union Finance Minister Nirmala Sitharaman and senior Congress leader Jairam Ramesh won. The other two BJP members to win are Kannada actor Jaggesh and former MLC Lahar Singh Siroya. JD(S) MLA Srinivas Gowda openly defied the party’s diktat. He told reporters that he voted for the Congress because he loved the party and indicated that he would be changing sides soon. Another JD(S) MLA SR Srinivas was said to have voted for the BJP. These results will adversely impact the JD(S)-Congress relationship ahead of the 2023 Assembly elections in Karnataka.

In Rajasthan, the winning candidate needed 41 votes. The Congress polled more votes than its strength. The three Congress candidates — Randeep Surjewala got 43 votes, Mukul Wasnik got 42 votes and Pramod Tiwari, the third party nominee, whose election looked precarious, also pulled through with 41 votes. The independent candidate and media personality Subhash Chandra, who was backed by the BJP, lost the elections. Other than the independents, as per reports, BJP MLA Shobha Rani Kushwaha also cross-voted in favor of the Congress.

The Rajya Sabha election results also have a larger political implication for the Congress, especially for Chief Minister Ashok Gehlot, at a time when his former deputy Sachin Pilot is in serious contention to replace him ahead of the 2023 Assembly elections. The election from the word go was framed as a difficult contest with the Congress going the extra mile to sequester its MLAs. With the emphatic victory, the credit will be heaped at Mr. Gehlot’s door. BJP candidate Ghanshyam Tiwari also won the election with 43 votes.

Seven candidates were in the fray for six seats from Maharashtra with BJP staking claim on three seats while the MVA had fielded four candidates. The battle for sixth seat was between Sena’s Sanjay Pawar and BJP’s Dhananjay Mahadik. In the first round, Imran Pratapgarhi of Congress (44 votes), NCP’s Praful Patel (43), Sena’s Sanjay Raut (42) and BJP’s Piyush Goyal and Anil Bonde (48 votes each) were declared winners. The quota for the victory was of 41. Mr. Pawar and Mr. Mahadik won 33 and 27 seats respectively of first choice. Mr Mahadik received seven extra votes each from Mr. Goyal and Mr. Bonde in second round, ensuring his victory for him.

In a jolt to the Congress in Haryana, the BJP’s Krishan Lal Panwar and the saffron party-backed Independent candidate Kartikeya Sharma were declared elected for the two Rajya Sabha seats from Haryana. Congress ‘Ajay Maken could not manage enough votes for his victory.

Earlier in the day, a delegation of BJP leaders met the Election Commission in Delhi. Speaking to reporters, Union Minister Mukhtar Abbas Naqvi said, “We have submitted complaints about both Maharashtra and Haryana. We have urged the Election Commission to declare the election null and void since several rules were broken in both the States.”

In Haryana too the counting did not start till late evening. The BJP complained that two Congress MLAs displayed their votes to unauthorized personnel. The Congress countered this claim. Mr. Maken, who was in fray, tweeted, “Fearing the loss of face in Rajya Sabha election results, the BJP has resorted to cheap politics stalling counting of votes in Haryana.”

A three-member delegation of Congress leaders led by Supreme Court lawyer and Rajya Sabha member Vivek Tankha met the Election Commission. He was virtually joined by Chhattisgarh Chief Minister Bhupesh Baghel, P. Chidambaram, Mr. Surjewala, Bhupender Singh Hooda and Rajeev Shukla. “There is no reason to hold back counting in Haryana. The BJP’s allegation has already been dismissed by the Returning Officer in the State who in his report clearly said that there has been no violation of secrecy,” Mr. Tankha told reporters in Delhi.

(With inputs from PTI)