Karan Johar wore a green shimmery jacket as he posed for the paps at his 50th birthday bash. Needless to say, fans are impressed.

Karan Johar celebrated his 50th birthday bash on May 25. On the special occasion, he threw a grand party at Yash Raj Studios. It was a star-studded affair with the biggest names from Bollywood attending the celebration including Ranbir Kapoor, Salman Khan, Kareena Kapoor Khan, Aamir Khan, Vijay Deverakonda, Hrithik Roshan, and others to name a few. As the theme of the party was black and bling, Karan Johar chose a green blingy jacket for the occasion.

KJO GOES ALL BLINGY ON HIS BIRTHDAY

Karan Johar’s birthday bashes are one big fat Bollywood event! Many who’s who from the tinsel town arrive at his extravagant parties, dressed in their glamorous bests of him. For the occasion, KJo wore a shimmery green jacket which he paired with a white shirt and black trousers. He wore a bow tie around his next to him. The filmmaker also wore a pair of classy shades as he struck different poses for the paparazzi.

Fans are absolutely impressed by Karan Johar’s style. Many even called him ‘hot’. Check out some comments below: 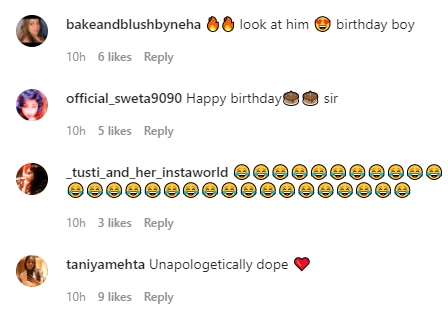 Karan Johar took to his official Twitter account on his birthday to post a note where he announced his upcoming film. However, he did not reveal the cast. He wrote, “Hello all, This is a note of reflection and one of immense excitement! I turn 50 today (a number that seemed like a distant nightmare), while I know it’s kind of a mid-point of my life but I can ‘t help my wannabe millennial self from existing (sic).”

The filmmaker who has been associated with films for the last 27 years said that he is ‘blessed to have had the best experience ever. He further added, “I am grateful for the brickbats, the bouquets, the praising souls, the public trolls…ALL OF IT!!! It’s all been a huge part of my learning curve and self growth (sic).”

IndiaToday.in had exclusively informed you about Karan Johar’s 50th birthday party on May 25. An insider close to Karan Johar told us, “Karan will be hosting his birthday bash at YRF this year. The theme of his star-studded party is black and bling. All the directors who have worked under Dharma Productions will be present. KJo has also invited Bollywood superstars Shah Rukh Khan and Salman Khan to his birthday bash. Besides them, power couples Ranbir Kapoor-Alia Bhatt and Ranveer Singh-Deepika Padukone are likely to mark their presence.”