The excellence achieved in the era of Klopp and Guardiola in England’s north-west has seen Liverpool and City persistently rewrite the record books.

Real Madrid take on Manchester City in the semi-final with the first leg in England. AP

Real Madrid and Villarreal stand in the way of Manchester City and Liverpool taking their battle for domestic honors to the biggest stage of all next month in the Champions League final.

A clash between City and Liverpool in Paris on 28 May would mean a third all-English final in four years.

The huge economic advantage enjoyed by the Premier League in TV rights deals is behind Madrid’s continued motivation to seek the comfort of guaranteed income streams from a European Super League (ESL).

However, Villarreal’s run to the last four is a reminder of why there is such opposition to a closed shop ESL.

The Yellow Submarine, with just one major trophy in their history, would have been shut out of competing on the European stage had the Super League 12, which also included City and Liverpool, succeeded in forming a breakaway league last year.

Now the team from a town with a population that would fit inside Anfield are 180 minutes away from the biggest game in club football if they can derail Liverpool’s quest for a quadruple.

Jurgen Klopp’s men trail City by a point with five games to go in a thrilling Premier League title race.

But they got the better of City to reach next month’s FA Cup final and lifted the League Cup in February.

Klopp already has experience of losing out to Villarreal boss Unai Emery on the European stage as his Sevilla side beat Liverpool in the 2016 Europa League final. 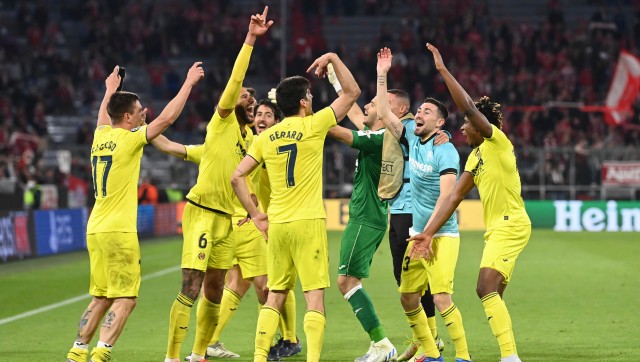 Villarreal have beaten Juventus and Bayern Munich in their run to the Champions League semi-finals. AP

That was just one of Emery’s four Europa League titles, the last of which came when Villarreal beat Manchester United in last year’s final just to qualify for the Champions League.

“They have probably the most successful cup competition manager in world football, so he knows what he is doing,” said Klopp. “Unai Emery is the king of the cups. It is unbelievable what he is doing.”

Liverpool’s status as favorites ahead of Wednesday’s first leg at Anfield is understandable given the difference in resources between the clubs.

City are also expected to reach the final for a second consecutive year despite the vast gulf in European pedigree between the English champions and Madrid.

The 13-time European champions are into their 30th semi-final, while City have reached the last four for just the third time.

But Pep Guardiola’s men were convincing winners when the sides met in the last 16 two years ago.

“It has to be a special night for us to enjoy it, give everything we have in our soul and after we’ll see what happens.”

Madrid produced a remarkable fightback from 2-0 down to beat Paris Saint-Germain in the last 16 and responded after falling 3-0 down to Chelsea at the Santiago Bernabeu to reach the semi-finals in dramatic fashion.

Carlo Ancelotti’s men will have home advantage again in the second leg next week, but there are doubts as to whether Los Blancos can continue to be carried by the aging legs of Karim Benzema and Luka Modric.

The excellence achieved in the era of Klopp and Guardiola in England’s north-west has seen Liverpool and City persistently rewrite the record books.

Over the next 10 days they have the chance to prove they are the two best sides in Europe by ending LaLiga’s challenge to English dominance of the Champions League.