Kejriwal will be on Goa tour on Saturday and Sunday, will campaign door to door

Kejriwal will be on Goa tour on Saturday and Sunday, will campaign door to door


Kejriwal will be on Goa tour on Saturday and Sunday, will campaign door to door 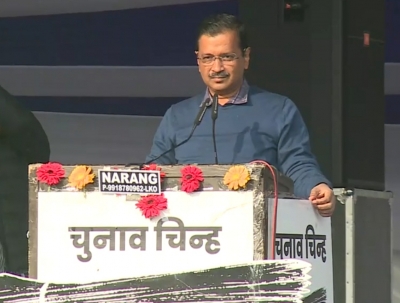 AAP convener Kejriwal will reach Goa on Saturday at around 1:30 pm and will campaign for the party. According to AAP, after Punjab, Kejriwal will now launch door to door campaign in Goa. After this, on the next day on Sunday i.e. on January 16, Kejriwal will hold a press conference in Panaji. Aam Aadmi Party has fielded Valmiki Nayak from Panaji seat for the second time. Former Goa Chief Minister Manohar Parrikar has been contesting from this seat. This time his son Utpal Parrikar is presenting his candidature in BJP from this seat. However, Babush Monserrate, who recently joined BJP, also wants to contest from this seat.

The special thing is that Aam Aadmi Party will issue separate manifesto for each assembly constituency in Goa elections. So that the issues of different regions can be covered in the Aam Aadmi Party manifesto.

Actually Arvind Kejriwal’s party is working hard in Goa. Recently, Kejriwal had made many big promises for women in the state. Like in Delhi, the Aam Aadmi Party has made many announcements including water-electricity free. Although AAP’s account was not even opened there in the 2017 assembly elections, but this time the party is making full preparations to become the kingmaker.

As per the directions of the Election Commission, votes will be cast in Goa on February 14 and results will be declared on March 10. Although tourists from all over the world come to Goa, but due to the Omicron variant of Kovid, foreign tourists are absent. Goa’s economy and rising level of unemployment are a matter of concern for the state. Therefore, before the assembly elections, there is a demand from the local people to resume iron ore mining in Goa. Both Congress and Aam Aadmi Party have made it an election issue.

Significantly, the term of the 40-seat Goa Legislative Assembly ends on March 15. It is expected that by March 15, a new government will be formed in the state. This time, along with Congress and BJP in the state, Mamata Banerjee’s Trinamool Congress (TMC) and Arvind Kejriwal’s Aam Aadmi Party are also in the electoral fray. However, for the last 10 years, BJP is in power in Goa, due to which it is also facing anti-incumbency this time. The party does not have a bigger face than the former Chief Minister of the state and Union Minister Manohar Parrikar.

In the year 2017, BJP had won 13 seats in Goa, while AAP’s account was not even opened. In the last assembly, the Congress had won the maximum number of 17 seats.