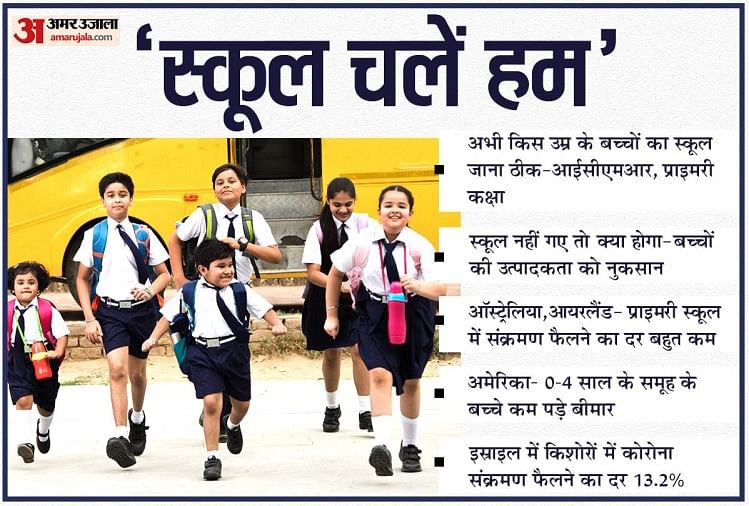 Professor Bhargava cited the example of countries in Europe advocating for the opening of schools, but given the pandemic, parents are certainly concerned about the safety of their children. However, many states have announced the reopening of schools.

cause of concern for parents
Releasing the data of the fourth sero survey on Tuesday, ICMR said that 67.6% of the people surveyed on 28,975 people have got Kovid antibodies. In this survey, 2,892 children in the age group of 6 to 9 years, 5,799 children in the age group of 10 to 17 years were included. Out of which antibodies were found in more than half of the children i.e. children were also affected by corona infection. In such a situation, parents are afraid that how safe is the opening of schools amid the fear of a third wave of Corona?

It has been proved in many research that young children are less prone to corona infection than adults. Even when they do have an infection, they usually have mild symptoms in most cases. The evidence so far suggests that a child can hardly infect anyone, yes, but an adult can easily make a child a victim of infection. Studies on children in Korea have also shown that infected children are less likely to spread the virus.

Takeshi Kasai, WHO’s regional director for the Western Pacific and UNICEF regional director for East Asia and the Pacific, Karin Halshoff, believe that globally, the proportion of cases of corona infection in children is very low. Children in primary-school age and younger are least likely to be infected. And even when they do get sick, they still have milder symptoms than adults. This is the reason that a very small number of children had to be hospitalized or died due to infection.

What do surveys in Australia and Ireland say
A survey conducted in Australia and Ireland revealed that the rate of spread of corona infection has been found to be very low in elementary grade schools. The National Center for Immunization Research and Surveillance and the University of Sydney, in collaboration with the Department of Health and Education, New South Wales Australia, conducted a research in primary schools from 26 September 2020 to December 2020. It was seen in the research that New South Wealth, which has a population of 8.1 million, where there were 555 cases of corona during the survey. The age of 24 corona patients was 18 years. While the primary and primary child care centers were open during this period and the attendance of 88 percent children remained.

During the pandemic in India, some studies said that school closures alone would prevent only 2-4 per cent of deaths. These analyzes suggest that the risk of community transmission of corona infection in young children’s schools is low. Nevertheless, schools were kept closed here as a precaution.

What happened to the high school kids in America-Israel?

The US experience shows that the rate of infection among children in the 0-4 year old group is almost half that of children 5-17 years old. Yes, the risk of spreading infection definitely increased due to mixing between young children and adolescent children in school.
The same thing happened in Israel. The high school was closed on 13 March 2020 which was reopened on 17 May 2020. This was the same time when the second wave of Corona had arrived in Israel in May and at that time the government opened a high school there. Just a few days after the school opened, the first case of corona was found on 26 May and the second case on 27 May. Due to which a large number of children became victims of infection. Infection rate of students: 13.2% per cent and staff members 16.6%.

Schools were reopened in September 2020 after the pace of Corona slowed down a bit, due to which the infection increased again in the group of 15-19 years. Due to the increase in cases among teenage children here, it was believed that proper measures were not taken to prevent corona in schools. Researchers from Australia, Britain and the US observed that if infection prevention strategies are followed properly, infection can be prevented in school as well.

Asian Development Bank warns that children will suffer the most if schools remain closed
The Asian Development Bank has warned that children are losing their ability to learn due to prolonged school closures. This will greatly harm the productivity and income of the students in future. Achieving the 2030 Sustainable Development Goals was going to be challenging for education even before the pandemic. Now, UNICEF and UNESCO estimate that the education budget would need to be increased by at least 7% in order to stay well away from the targets.

What does WHO say about opening schools?
WHO says that while keeping children safe, their learning process should be promoted. For this, a district-based strategy should be made and the local administration should decide where to open the school partially and where to keep it completely closed. WAHO believes that closure of educational facilities should be considered only when there is no other option left.

The WHO has suggested dividing the districts into four categories according to the rate of spread of infection.
1- Keep all schools open in districts with no cases or sporadic cases and implement corona infection prevention and control measures here.
2- Where the infection is not spreading much, most of the schools in that district can be kept open.
3- May consider closing schools in areas where community transmission is spreading.
Schools should be closed especially in districts with community transmission, where hospitalizations and deaths are increasing.

What measures should be taken if schools open
WHO believes that there is a need to make such a special strategy for the prevention of corona infection in children.

1. Children should be explained about the corona protocol and follow it.
2. Consistent and correct use of masks (required for all children over 2 years of age and children above 5 years of age).
3. Periodic screening.
4. Better ventilation (with proper safety precautions, windows should be opened).
5. Frequent hand washing and use of sanitizer.
6. Staying home when sick.
7. Regular cleaning of the school should be done.
8. Vaccination of teachers and other staff is complete.
9. As far as possible, children 12 years of age and above should keep a distance of at least 1 meter from each other.
10. While teachers and support staff stay at a distance of one meter from others and students.