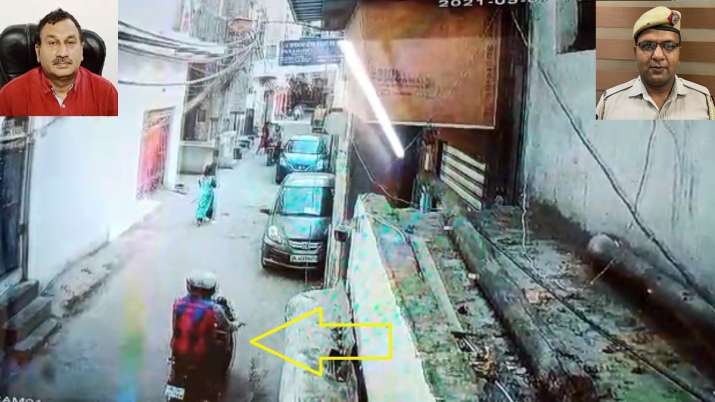 
New Delhi. It is said that if the people of the country remain vigilant, then both police crime and criminals can be controlled. To see something similar in the North East district of the capital New Delhi, where the mobile snatching was caught within minutes due to a vigilant citizen. This is the case in Brahmapuri area of ​​North East Delhi, where on Friday, a woman named Rajni, who works in the Finance Department’s Revenue Department, was going to her house at four o’clock on Friday evening. She was passing by street number 15 of Brahmapuri, when two boys already on the bike saw the opportunity and snatched her mobile.

The entire view was seen in CCTV cameras by lawyer Shankar Gautam in his office. When Rajni was leaving the lane, she had some doubts about the movements of the youth riding on the bike, after which he immediately exited the office and ran out of the same street where the bike riders turned to face the snatcher girl. After this, as soon as the snatchers snatched the girl’s mobile and ran back, the already present Shankar Gautam struck her with the aim of toppling her bike, due to which a bike rider fell from the bike and started running.

At the same time, a head constable of the Delhi Police, who was leaving from there, was informed about this, so he immediately ran his bike on the path on which the young man fell from the bike. He caught that snatcher with the help of the public.

Shankar Gautam, witness to the incident, told the media that he was sitting in his office and was watching CCTV cameras. He told, “I saw a girl was going, two motorcycles were going after her. As the girl was moving, she was moving her motorcycle by stopping the motorcycle question. On which I Doubtful. As soon as the girl entered the number 15, those boys also entered the street number 15. When in doubt, I went after them and stood on the nook of street number 15. “

He further said that as soon as he snatched away the snatcher girl’s mobile, then at that time people made a voice, then we tried to drop the motorcycle on the square of street number 15. But the motorcycle did not fall, but one of the boys fell and at that time Head Constable Azad Akhtar of New Osmanpur was leaving from there, who immediately drove away and caught his motorcycle. The name of the young man caught is Arbaaz. Head Constable Akhtar nabbed it from Brahmapuri street number 17.

At the same time, its other partner, whose name is Junaid, managed to escape from the spot. The police have recovered the mobile from the arrested snatcher and registered an FIR in the New Osmanpur Police Station under Section 236/2021 U / S 356/379/411/34 of the IPC in this case. Police are also trying to catch Junaid, the other snatcher who was involved in the incident. During the investigation, it was found that Arbaaz, the snatcher arrested, had been involved in snatching incidents earlier also. Four cases of snatching are registered against him.