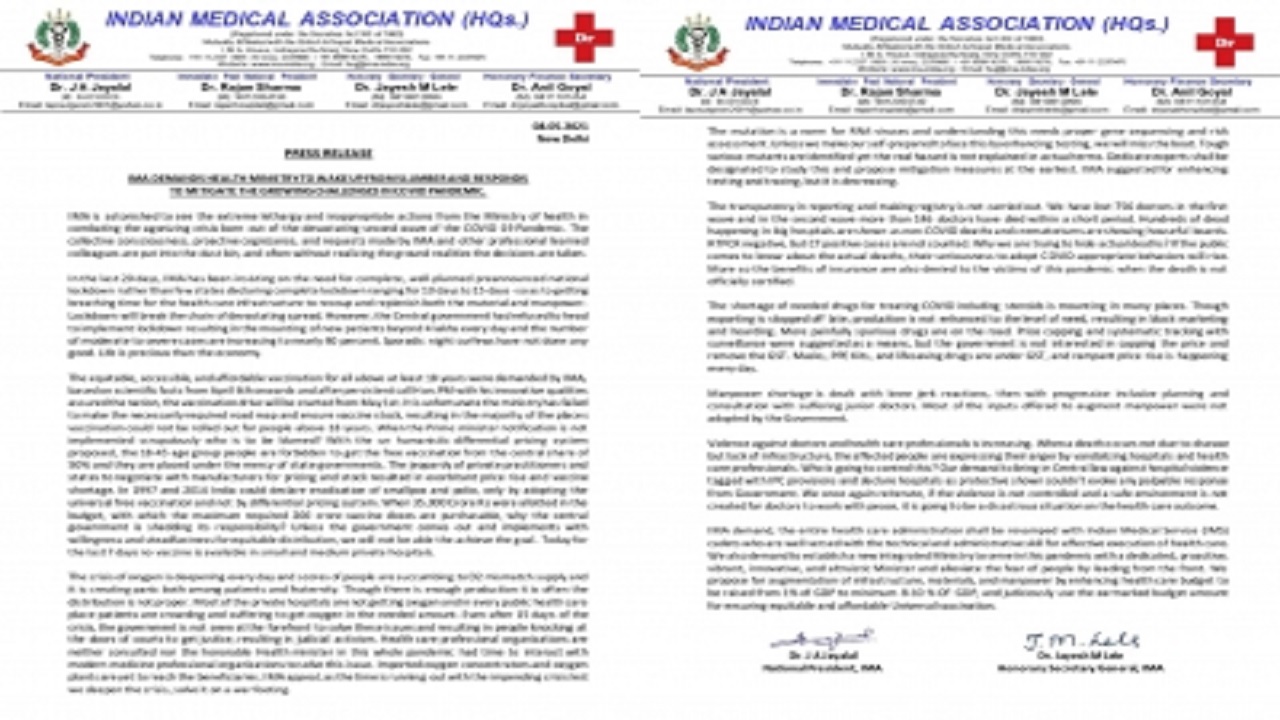 The Indian Medical Association (IMA) told the Union Health Ministry on Saturday, “It is time to deal with the devastating crisis, but the department showed extreme lethargy and inappropriate actions being taken to fight the wave of Kovid-19 epidemic.” About to do. The association said it has come to see that the collective consciousness appeals, active cognizance and requests by the IMA and other qualified professional aides are put to ‘dustbin’ and the decisions are taken ‘without understanding the ground reality’.

In the last 20 days, even though some states have announced lockdowns of 10 to 15 days, the association instead states on the need for a planned, pre-announced full national lockdown, said an IMA statement. Is pushing. Pre-announced so that there could be some time to repair health care infrastructure, raise materials and manpower.

The National Voluntary Organization of Modern Scientific Medical System of Doctors in India said the IMA, the lockdown would break the chain of disastrous outbreaks. However, it was also said that the central government refused to implement the lockdown, as a result, more than four lakh new patients grew every day and the number of moderate to severe cases was increasing by almost 40 percent.

Noting that ‘sporadic night curfews have not produced any good results’, the IMA asserted, life is more valuable than the economy. The IMA said, wake up from sleep and show action to mitigate the increasing challenges in the Kovid epidemic. The IMA had demanded a just, accessible and cheap vaccination for people over 18 years of age based on scientific facts from 6 April and the vaccination campaign started from 1 May after Prime Minister Narendra Modi continuously reassured the country. Gone.

It is unfortunate, the IMA said, that the ministry has failed to create the necessary roadmap and ensure vaccine stocks, resulting in vaccination for people over 18 years of age. The doctors’ association said, when the Prime Minister’s notification is not clearly implemented, then who should be blamed?

The IMAA considered the differential system of Kovid vaccine pricing as ‘inhumane’, stating that people in the age group of 18 to 45 years are prohibited from giving free immunization from the central share of 50 per cent and are placed under the mercy of the state governments. . The organization said, due to private physicians and states being asked to negotiate with manufacturers for pricing and stock, there was a shortage of price increases and vaccines.

The IMA cited the example of vaccination for the eradication of smallpox and polio in 1997 and 2014, stating that this is only possible by adopting universal free immunization, not differential pricing. The IMA said that when Rs 35,000 crore was allocated in the budget, a maximum of 200 crore vaccine dozen can be purchased from it.

IMA said, why is the central government shifting its responsibility? IMA said, Today, for the last seven days, there is no vaccine available in small and medium level private hospitals. The organization said, the crisis of oxygen is getting deeper every day and the number of people dying due to mismatched supply of oxygen is increasing and it is creating panic between both patients and the community. Although adequate production is taking place, the distribution is not taking place in a proper way.