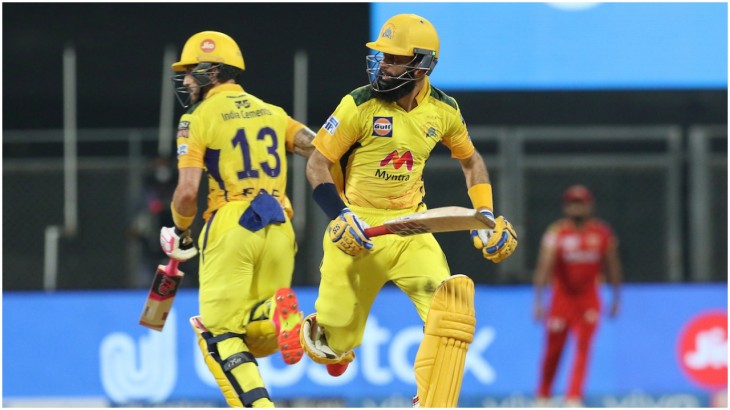 In today’s match of IPL 2021, Chennai Super Kings ie CSK, captained by MS Dhoni, defeated Punjab Kings, captained by KL Rahul by six wickets. This is CSK’s first win in IPL 14. Earlier, CSK lost to Delhi. At the same time, the Punjab Kings won the first match and lost this match. Now in the points table of IPL 2021, CSK has also opened its account with two digits. In today’s match, Deepak Chahar remains the hero of CSK’s victory. Who spoiled the Punjab Kings wind from the very first over. Although in today’s match, it was not expected that CSK would take so long, the team chased the score slowly and got the match in 15.4 overs. This was the 200th match of CSK’s captain MS Dhoni and Deepak Chahar has made it memorable.

However, CSK started off chasing small scores as well. Opening batsmen Rituraj Gaikwad and Fof Duplesey made a very slow start to the team. In the first two overs, the team scored two runs. Meanwhile, captain KL Rahul put Arshdeep Singh for bowling and Rituraj Gaekwad was out in an attempt to play a big shot due to pressure to score runs. Arshdeep Singh sent them to the pavilion. After this, Moin Ali came to bat at number three. He started batting in his style as soon as he came. Moin Ali and Fof Duplesey worked together to take CSK’s innings forward. However, there was only a short time before the victory that Moin Ali was dismissed in an attempt to score fast. When the team needed only eight runs, then Suresh Raina was also out. He was dismissed by Mohammed Shami. Suresh Raina scored eight runs. Ambati Rayudu was also dismissed on the next ball. Sam Curran and Fof Duplesey came after this and brought the team to the door of victory.

Earlier, due to the excellent bowling of fast bowler Deepak Chahar, the Punjab Kings team could not score more runs. Deepak Chahar dismissed four big Kings of Punjab Kings for 13 runs. In the eighth match of IPL 2021, the Punjab Kings team could score only 106 runs. This was the 200th match of Chennai Super Kings captain MS Dhoni and in this match, he won the toss and decided to bowl first. Deepak Chahar, after coming out, bowled amazing and proved the decision of captain MS Dhoni to be true. Punjab’s team could score 106 runs for eight wickets in 20 overs. For Punjab Kings, Shahrukh Khan scored the most 47 runs with the help of four fours and two sixes from 36 balls. None of the other batsmen could support the team with runs. Apart from Deepak, Moin Ali, Dwayne Bravo and Sam Karen took one wicket each from Chennai.

Also read: IPL 2021: Today’s match for MS Dhoni is very special, know what is the reason

In today’s match, the start of Punjab Kings was very bad and Deepak Chahar completely stunted Punjab’s innings. Punjab Kings lost Mayank Agarwal’s 0, Captain Lokesh Rahul’s 5, Chris Gayle’s 10, Nicholas Puran’s 0 and Deepak Hooda’s 10-run wicket on a total of 26. Other than Rahul, Deepak Chahar shook the other four wickets. After the initial setback, Shah Rukh Khan along with Zhai Richardson tried to handle the innings and both batsmen took the score to 50. But Moin Ali did not give Richardson the opportunity to advance this partnership by bold. After this, Bravo sent Murugan Ashwin to the pavilion. Ashwin scored six runs from 14 balls. Although Shah Rukh tried to get Punjab to a respectable score, he failed to do so and was dismissed on the first ball of the last over as the eighth batsman. Mohammad Shami remained unbeaten on 12 balls in the Punjab innings.