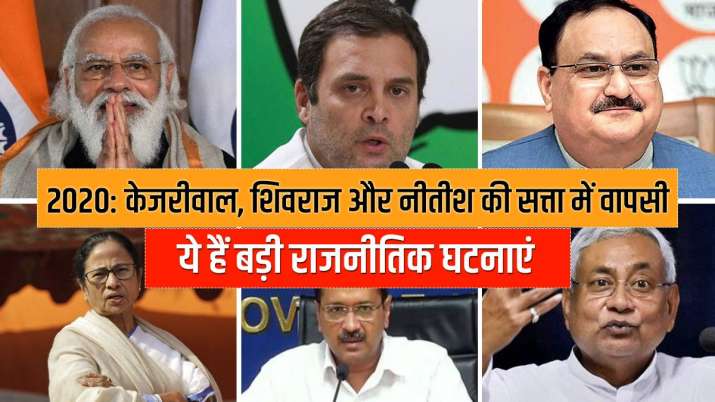 
The year 2020 in history where Corona will be identified for the crisis. At the same time, this year will also be known for some political experiments and upheavals that make Indian democracy discrete worldwide. In the beginning of the year, where Arvind Kejriwal completed his hat-trick by attacking the BJP, on the other hand, in the political game of Madhya Pradesh, the political googly of CM Kamal Nath Shivraj Singh Chauhan could not understand and kept going from under his feet. . Due to Corona in the year, while the entire public was in lockdown, the field of politics also remained quiet for a few months. When the fog of Corona was reduced, Nitish Kumar was shocked by the anti incumbency. Talking about other important events, the Akali Dal, which had been a partner of the NDA for decades, broke away from the BJP to protest against the agricultural bills. Let’s know about 10 such interesting events of this year which will keep the year of 2020 alive in memories in the coming times.

The year started with the assembly elections in Delhi. Talking about the year of 2020, it also brought with it the opposition to the revised citizenship law. Demonstrations were held across the country including Delhi in January. Shaheenbagh was the center of discussion in Delhi elections. Assembly elections were held in Delhi in February 2020 amid political turmoil on this issue. But polarization did not go on in Delhi and the Arvind Kejriwal-led Aam Aadmi Party swept the sweep and won 62 out of 70 seats and won a three-fourth majority. The BJP got eight seats and the Congress did not even open an account this time.

The BJP, which saw the defeat in Delhi, got a chance to smile the following month itself. Amid the holiage of Holi, a new political script was written in Madhya Pradesh. What made Jyotiraditya Scindia angry with the Congress, Kamal Nath’s government was shaken. The government of Kamal Nath, running with a majority, fell in March 2020. 25 Congress MLAs led by Jyotiraditya Scindia rebelled and resigned. The MLA stayed in a hotel in Karnataka for about a month. On 23 March 2020 Shivraj Singh Chauhan again became the Chief Minister of Madhya Pradesh. That is, Shivraj’s googly led Kamal Nath from the Chief Minister to the former CM.

At the beginning of the year, where Jyotiraditya Scindia got away from being angry with the Congress. In the middle of the year, similar news came from the camp of another Congress youth leader, Sachin Pilot. In July, Sachin Pilot, deputy CM in the Ashok Gehlot government, camped in Delhi, adopting a rebellious attitude. The MLAs of Rajasthan used to appear in hotels in Manesar and sometimes in Jaipur, sometimes in Delhi for about a month. But Ashok Gehlot, a magician by profession, did not allow the creation of MP Part 2 in Rajasthan. After the intervention of former Congress President Rahul Gandhi, Pilot finally agreed, Pilot agreed to the reconciliation agreement on 10 August 2020.

In 2019, the BJP was surprised by leaving the NDA where the Shiv Sena. At the same time, in 2020, the oldest ally Akali Dal also walked away from the NDA. Caused agricultural law. When the government passed the ordinance of the agricultural bill, while the Akali was with the government, the relationship deteriorated as soon as the law was approved by the Parliament. Union Minister Harsimrat Kaur resigned. The Akali Dal also ended its relationship with the government in protest against the law.

For Bihar three-time Chief Minister Nitish Kumar, this election was a nose question. Anti-incumbency was heavy. But Nitish won the last ball with Brand Modi. The game went to Super Over in a very interesting ballot. Nitish escaped being caught at the boundary in the midst of Tejashwi’s lethal bowling in the opposition and managed to win for the fourth time with a narrow margin. The RJD emerged as the largest party in Bihar with 75 seats. Of the 243 seats in the Bihar assembly elections, the NDA won 125 seats with just two more than the majority. The RJD-led grand alliance got 110 seats.

After Amit Shah became the Home Minister after the BJP’s victory in the 2019 elections, the BJP was looking for a leader who was as militant as Shah and kept the party united. In January 2020, senior leader Jagat Prakash Nadda was elected the party’s president. He took office on 6 April 2020 on the BJP’s foundation day. He was made the acting president of the BJP in July 2019 after Shah took over the Home Ministry. Under the leadership of Nadda, the BJP performed brilliantly in the Bihar elections. The BJP-ruled governments were also successful in the by-elections in Gujarat, Karnataka, Madhya Pradesh and Uttar Pradesh.

The dissatisfaction of the senior leaders of the party against the top leadership of the Congress after the dismal performance in the consecutive assembly elections after Lok Sabha also became known this year. In August 2020, a letter from 23 Congress leaders, including Ghulam Nabi Azad, appeared. These leaders included Anand Sharma, Kapil Sibal, Shashi Tharoor, Manish Tiwari, Bhupendra Singh Hooda etc. In the letter, all the demands including organization elections were raised in front of Congress President Sonia Gandhi. Congress Working Committee meeting also witnessed fierce battle over it