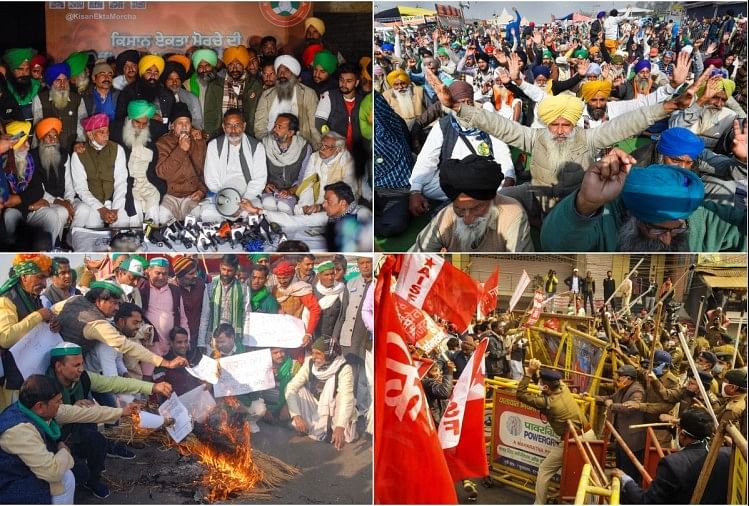 There will be talks between the government and farmer organizations on Wednesday, against the impasse on the Delhi borders for 34 days against agricultural laws. In response to the government’s invitation to the sixth round of talks, the farmers’ organizations again bluntly said that they would talk on a pre-determined agenda.

Further negotiations will be held after discussing the guarantee of the MSP, repealing all three laws. At the same time, the government also does not want to let the conversation going on after a long gap. For this, Home Minister Amit Shah decided on a strategy in a marathon meeting with the group of ministers who were involved in the talks.

In a letter sent to Agriculture Secretary Sanjay Aggarwal on Tuesday, the United Kisan Morcha said, “They accept the proposal for talks at Vigyan Bhawan on December 30 at 2 pm.” Farmer organizations wrote that they would come to speak in the same order on the agenda given in the previous letter. The government should be ready for this. The letter said that the three of us will act on the cancellation of the law, the procedure and provision of legal guarantee of the MSP, the exclusion of farmers from the penal provisions of the ordinance of the Commission for Air Pollution Management in and around Delhi NCR and the withdrawal of the draft Electricity Amendment Bill. will talk. Farmers’ organizations, citing the government’s letter, said that for these ‘rational solutions to the relevant issues’ it is necessary that the dialogue be on this agenda.

Tractor rally postponed, now on 31
Farmers’ organizations postponed the proposed tractor rally on 30 December in view of the negotiations. Farmer leader Abhimanyu Kuhar said, “We have decided not to let the rally and talks collide.” Now on December 31, there will be a tractor rally from Singhu and Tikari border to Kundli-Manesar-Palwal highway.

… then we don’t have to agitate
Indian Farmers Union spokesman Rakesh Tikait said, ‘We have to agitate due to weak opposition. If the opposition worked properly, the farmers would not have to come on the road.

Farmers said- If a solution is found, then otherwise the government will get heavy by 2021
Farmer leaders have said that if the government removes the solution from negotiations this year, then the next year may be overshadowed. Meanwhile, peasant agitators continued on the Tiki border from Punjab. 12 farmer leaders from Punjab and Haryana went on hunger strike. Rakesh Tikait, leader of the Indian Farmers Union from Uttar Pradesh, addressed the farmers at a gathering organized on the Tiki border. Farmer leader Rajnesh Bharti from UP, Vijayakanth from Bihar and Manoj Odd from Kerala also spoke at the meeting.

You will give free wifi at the movement site
The ruling Aam Aadmi Party in Delhi will provide free Wi-Fi to the farmers at the agitation site. Raghav Chadha, co-in-charge of Punjab, who arrived in Chandigarh, said, ‘Free WiFi service will be provided to farmers on the Singhu border. You will keep trying continuously for the benefit of farmers.

Internet stalled in Punjab villages
In Punjab, internet services in the villages came to a standstill due to the disconnection of Jio Company’s mobile towers. The closure of the towers of Hazara Singh Wala, Tibbi, Rauke Hithad, Mallanwala and Khaifemiki stopped internet services and affected the online education of school children.

Farmer sitting on strike dies of pneumonia
The farmer of Dharmapura village, who went to the Tikari border, died of pneumonia on Monday night. Pyara Singh (75), along with the batch of Bharatiya Kisan Union Ekta (Dakonda), had stayed on the border border for a month. He was admitted to a nearby hospital due to ill health, but the condition did not improve. After this, family members brought him to the village. He died late on Monday night.