Yechury said that it would be better that the government resolve the issue with them (SKM) instead of targeting the opposition if the ongoing negotiations fail. The CPI-M leader expressed concern over the growing deadlock between farmer unions and the Modi government, saying that almost all of them, including him 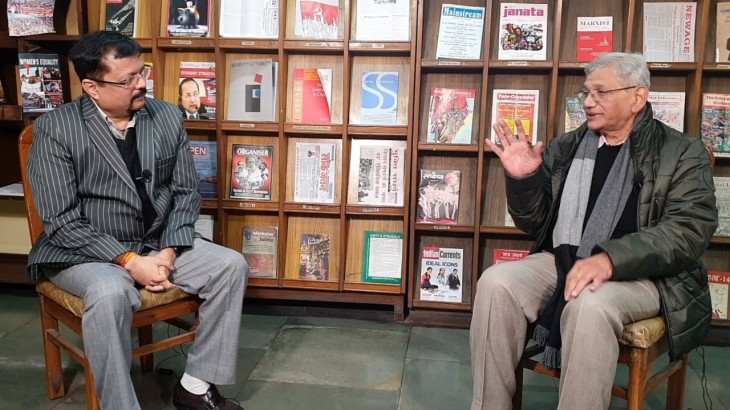 Communist Party of India-Marxist (CPI-M) General Secretary Sitaram Yechury says that while the opposition parties are supporting the farmers, they have no direct role in the movement against the new agricultural laws. Yechury, in a special conversation with the media, advocating the stand of all opposition parties, said, “More than 200 peasant organizations have come under the banner of United Kisan Morcha (SKM) and they have been opposing the agricultural laws that benefit the corporate for the last several months.” Have been. We are with SKM, but let me make it clear that farmers are doing the whole movement, not us.

Yechury said that it would be better that the government resolve the issue with them (SKM) instead of targeting the opposition if the ongoing negotiations fail. The CPI (M) leader expressed concern over the growing deadlock between the farmer unions and the Modi government, saying that almost all opposition leaders, including him, want that this deadlock on agricultural laws should end immediately.

He said, repeated failures (of talks) will increase unrest in rural India. We are really concerned about the health of thousands of old farmers, who are sitting on dharna on the borders of the capital. So far, 40 farmers have died due to freezing cold. Therefore, it is important to end this impasse. I request that the government should call all stakeholders. Discuss issues openly with them and accept their demands.

Yechury also said that in addition to this, the government can call a session of Parliament, discuss agricultural laws and remove objectionable parts, new laws can be brought in accordance with the demands of the farmers. Supporting the Shiv Sena’s call to form a united front of the opposition led by Nationalist Congress Party (NCP) supremo Sharad Pawar, the CPI (M) leader said that although he supports the Shiv Sena’s gesture, the leader should be elected unanimously.

He said, Sharad Pawar is one of the most capable leaders in the current situation, but once all the parties come under one roof, the leader can be decided. Nevertheless, I would like to say that in the current political situation of the country a strong and purposeful opposition is needed. Asked whether the Congress appears as a weak opposition against the Bharatiya Janata Party (BJP), Comrade Yechury said that to a large extent this is the truth. He said, “We all want that a strong Congress will mean a very strong opposition. But I cannot comment on the internal affairs of any party.”

On leaving Mamata Banerjee alone in West Bengal and CPI-M’s alliance with Congress, Sitaram Yechury said, “Our primary objective is to stop BJP from forming government in Bengal next year.” He said, in fact the BJP fully wants Mamta to join us. But we realize that a huge anti-incumbency wave against Mamata will hamper our chances. Therefore, we decided that all the left parties and the Congress, except Mamta, would contest as a front. We feel that such a triangular fight will be more effective against the BJP.