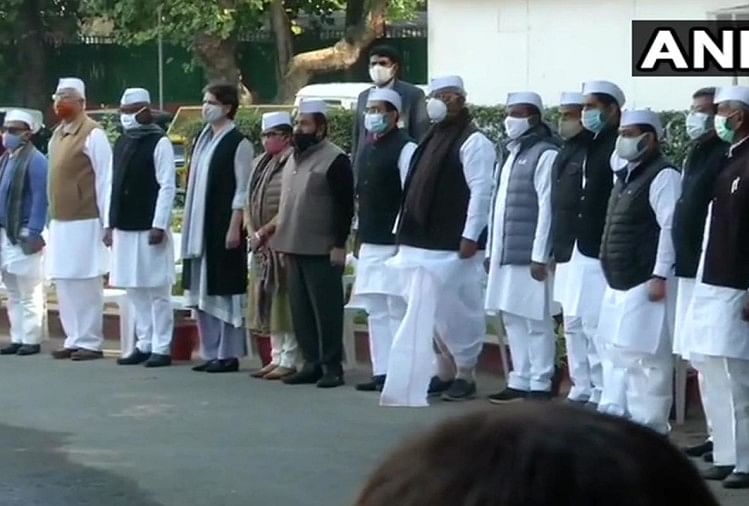 On December 28, the country’s oldest party Congress is celebrating its 136th Foundation Day. Rahul Gandhi left for a foreign tour a day before the party’s foundation day. The party says that they have gone on a personal journey. Rahul has gone on a trip abroad at a time when the farmers’ movement is going on in the country on the one hand and the party’s foundation day on the other. Union Minister and Chief Minister of Madhya Pradesh Shivraj Singh Chauhan has leveled at him. Apart from this, the party will take out tricolor in support of farmers today. The party will also run a campaign called ‘Selfie with Tiranga’ to connect the youth with them.

The Congress is celebrating its 136th Foundation Day on Monday. On this occasion, members of the All India Congress Committee (AICC) have instructed the state units of the party to organize a ‘Tiranga Yatra’ and run a social media campaign ‘Selfie with Tiranga’ to connect with the youth. Instructions have also been given to follow physical distance in view of corona virus. During this time solidarity will also be shown with the agitating farmers.

The Congress has been committed from the beginning to raise the voice of the nation.

Today, on the foundation day of the Congress, we reiterate our pledge of truth and equality.

Also read- Congress march: Rahul Gandhi submitted memorandum to President Kovind, said – Law will have to be withdrawn by calling a joint session

Giriraj lashed out at Rahul
BJP MP Giriraj Singh has taunted him for Rahul’s departure on a foreign trip. Singh says that Rahul’s holidays in India are over. He tweeted, “Rahul Gandhi’s vacation in India is over, today he went back to Italy.” Rahul is out of the country at a time when the party has its foundation day and the internal election process has been started to elect a new president. Apart from this, people on social media say that they are not serious about politics.

Rahul Gandhi left for Italy
Congress spokesperson Randeep Singh Surjewala gave information about Rahul’s foreign trip. He said, “Rahul Gandhi has left for a personal visit abroad and he will be out for a few days.” However, he did not reveal where Rahul has gone. At the same time, sources say that Rahul has gone to Italy. He has left for Milan, Italy on a Qatar Airways flight. Actually, Rahul’s grandmother lives in Italy and he has been visiting her earlier.