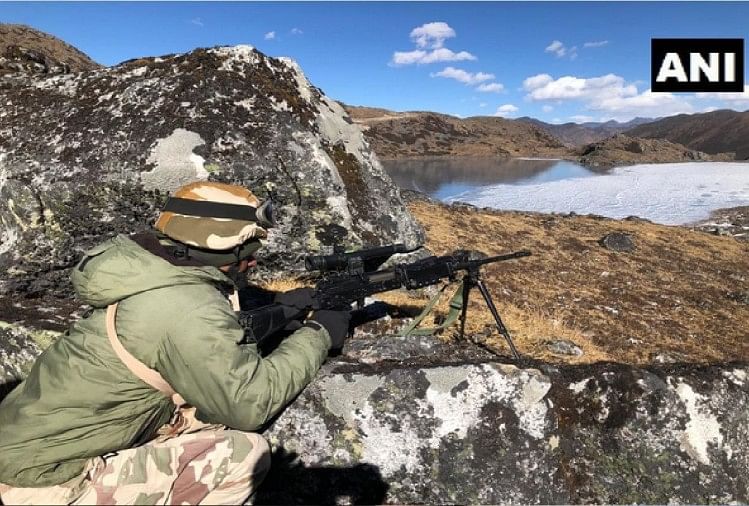 The conflict situation between India and China remains intact. Security forces are deployed on the border. In this episode, the Indo-Tibetan Border Police (ITBP) has said that its soldiers in the sensitive Tawang sector of Arunachal Pradesh are in alert mode on the Line of Actual Control (LAC). The ITBP said that Chinese troops would not be able to infiltrate the area.

The team of the news agency ANI recently visited Forward Post in Tawang Sector, from where Chinese areas can be seen. The team observed that the ITBP personnel are deployed in the Tawang sector promptly and infrastructure has been developed for fast forward deployment here.

Things are difficult due to extreme cold, but young alert

Commandant IB Jha, 55 battalion commander of ITBP, said, “When such incidents (skirmishes in East Ladakh) happen, we have to be ready with promptness to prevent such unforeseen incidents from happening.” He said, as you can see that there are extreme cold conditions here which make things difficult, but our jawans are very alert and keep an eye on the border at all times.

The officer further said that no one can dodge us here. We have promised our country that we will protect it and we are doing our duty. We have prepared a high level of security for the borders.

ITBP played an important role in the conflict with China
The ITBP has played a key role in the ongoing conflict with Chinese troops over LAC in eastern Ladakh and Arunachal Pradesh. In the initial clashes along the border, the ITBP faced off with Chinese troops at Pengong Lake, Finger Area and Patrolling Points 14,15,17 and 17A. Despite being in low numbers in this incident, the soldiers not only prevented the Chinese troops from advancing, but also inflicted heavy losses on them. Commandant Jha said that the bravery shown by the ITBP jawans with China at the April-May deadline early on with China has highly motivated the troops stationed in the Arunachal region.

Youth ready to teach Chinese a lesson
Commandant Jha said, our soldiers fought hard in the Ladakh sector and showed their strength. The jawans here often tell me that their counterparts in Ladakh have given a tough fight to the Chinese and they also want them to do better if there is such an opportunity in our area of ​​responsibility. The ITBP officer said that the preparations made by them will ensure that they can do so when the time comes.

Great convenience from infrastructure development
While showing the patrolling done by ITBP soldiers in Tawang sector, Commandant Jha said, after the Indian side has developed infrastructure in the last few years, now Indian soldiers have to move very close to the last point or zero point on LAC in Tawang area. Vantage has been achieved.

Commandant Jha said, a lot of work has been done in recent times, from clothes to infrastructure. As you can see our vehicles can get to the end point, this helps to respond to situations quickly without fatigue.

Tawang is the most sensitive sector
Tawang Sector is one of the most sensitive areas in the Northeast on the LAC and during the 1962 war, Chinese troops managed to penetrate into Indian territories. However, in view of the sensitive nature of the sector, an entire contingent of the Indian Army is stationed almost entirely around Tawang to prevent any daring by the enemy.