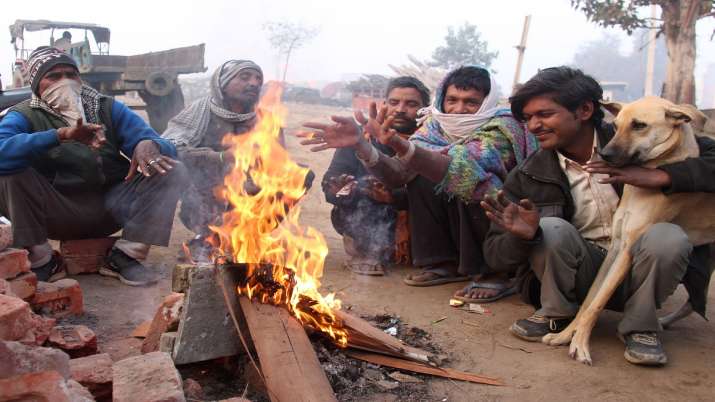 new Delhi. Most parts of North India remained cold on Thursday, while minimum temperatures were below normal in many places in Punjab, Haryana and Rajasthan. There was a slight improvement in the freezing conditions in Kashmir as the minimum temperature in the entire valley rose slightly, although the Meteorological Department has predicted light snowfall for two days from Saturday. The India Meteorological Department (IMD) said that in the national capital, the minimum temperature remained below five degrees Celsius for the second consecutive day. The department said that due to dense fog in Delhi, visibility reduced to 100 meters in many areas on Thursday morning.

Safdarjung observatory recorded a minimum temperature of 4.5 degrees and a maximum of 23.1 degrees Celsius. Kuldeep Srivastava, head of the regional forecasting center of the department, said, “Due to the thick fog prevailing in Palam area, the visibility was reduced to 100 meters between five and eight o’clock in the morning.”

Read- Youth adopted Hinduism, some people of old religion are giving threat to their lives

Meanwhile, Ambala, Karnal, Narnaul, Rohtak, Bhiwani and Sirsa in Haryana also recorded night temperatures of 5.7, 2.9, 4.6, 4.6, 5.2 and 6.3 degrees Celsius respectively, which is below normal. Chandigarh, the shared capital of the two states, recorded a minimum temperature of 4.7 degrees Celsius.

Read- Atal Bihari Vajpayee: Atal was known for his eloquence, read the highlights of his famous speeches

The weather center has forecast rain and snowfall at different places in the state on 27 and 28 December. After the minimum temperature rose on Thursday in the Kashmir Valley, there was a slight decrease in winter, while the Meteorological Department has predicted light snowfall in the valley for two days from Saturday. Officials of the Meteorological Department said that some increase in night temperature has been recorded but it has remained below the freezing point. He said that due to snowfall on December 12, the weather in the entire Kashmir is dry and cold and the night temperature is slightly below the freezing point.

Cold wave has increased in Uttar Pradesh in the last 24 hours due to cold wave. At the same time, people had to face trouble due to dense fog on Thursday morning. According to the Meteorological Department, there will be no significant change in the night temperature in all the districts of the state. Gorakhpur, Bareilly, Moradabad, Ayodhya, Lucknow, Prayagraj, Kanpur districts recorded the minimum temperature below normal. Muzaffarnagar recorded the lowest temperature of 2.5 degree Celsius in the state, while Jhansi recorded the highest at 26.1 degree Celsius.