Modi Government and Kisan Sanghtan Stuck on their Demands, No Clue to Null Agitation Government and farmers one step ahead two steps backward, both adamant

Modi Government and Kisan Sanghtan Stuck on their Demands, No Clue to Null Agitation Government and farmers one step ahead two steps backward, both adamant


The United Kisan Morcha is expected to meet on Friday to discuss the Centre’s letter and give a formal reply to it. 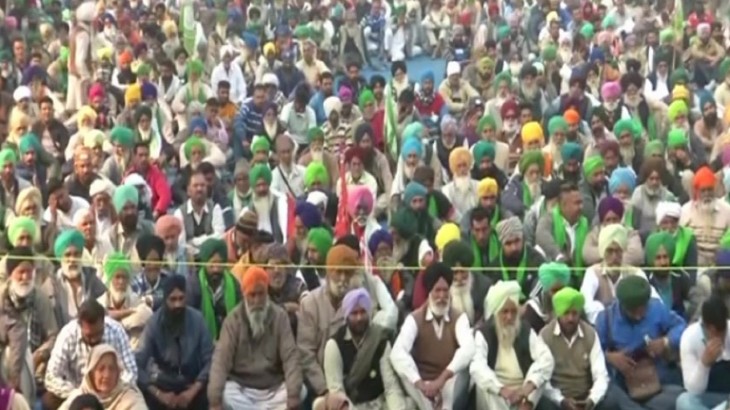 On Friday, some way of meditation can be revealed. (Photo Credit: News Nation)

The central government has sent a proposal to the protesting farmers to resume the stalled negotiations and asked them to fix a date as per their convenience to end the deadlock over the new agricultural laws. Here, Prime Minister Narendra Modi will address farmers during a program on Friday. However, agitating farmers’ organizations alleged that the government’s new letter for talks is nothing but a propaganda about farmers to show that they are not willing to negotiate. At the same time, the farmers’ organizations also asked the government to include the repeal of three new agricultural laws in the agenda to restore the dialogue. The United Kisan Morcha is expected to meet on Friday to discuss the Centre’s letter and give a formal reply to it.

Fraud in MSP on farmer organizations
As many as 40 farmers’ organizations have been performing under the banner of this front at the three entry points of Delhi, Singhu, Tikri and Ghazipur border for the last almost a month. The Agriculture Ministry, along with sending a new proposal, clarified that it would not be logical to include any new demand related to the minimum support price in the agenda, as it is beyond the scope of the new agricultural laws. However, the unions said that the MSP cannot be kept separate from the demand to repeal the controversial laws. He said that giving legal guarantee to MSP is an important point of his movement. The ministry said that it is ready to find a logical solution to the issues of the protesting farmers.

Also read: PM Modi to release next installment of PM-Kisan, it will benefit

PM Modi will give 18 thousand crores to farmers today
Prime Minister Narendra Modi will transfer more than 18 thousand crore rupees to the accounts of more than nine crore beneficiary farmer families by pressing a button on Friday. This amount will be released as the next installment of financial benefit under the Prime Minister Kisan Samman Nidhi (PM-Kisan). According to the Prime Minister’s Office, during this event organized through video conference, Modi will also interact with farmers from six states and share his experiences about Kisan Samman Nidhi and other initiatives taken by the government for the welfare of farmers.

Congress attacker on farmers movement
Meanwhile, the Congress, taking a stand against the government, has requested President Ram Nath Kovind to call a joint session of Parliament to repeal the agricultural laws. Party leader Rahul Gandhi alleged that democracy in India has remained only ‘imaginary’. Gandhi met the President and handed him a memorandum. It is being told that 2 crore farmers have signed it and demanded the repeal of the law. Gandhi said that farmers and laborers will not benefit from this.

Also read: Agriculture Minister Tomar said – Rahul should tell whether he is lying today or in 2019 …

Center challenges Congress
The Center rejected the demand to withdraw the law, saying that the reforms would benefit the farmers. The BJP challenged Rahul Gandhi to have an open debate about what the Congress did for the farmers while in power and what the Modi government has done. Union Minister Prakash Javadekar accused the Congress of ignoring the interests of farmers and keeping them poor by ensuring cheap prices of food grains, but the Modi government has given the farmers a fair price through the minimum support price. They have been empowered by implementing the Swaminathan Commission Report.

Five rounds of talks were inconclusive
The last five rounds of talks between the government and farmer organizations have not yielded any results so far. The farmers, who have been protesting on the borders of Delhi for almost a month, are adamant on the demand for withdrawal of all three new agricultural laws. However, the government has expressed its resolve in its new letter that it is ready to find a logical solution to the issues raised by the farmer unions. Thousands of farmers have been protesting against the new agricultural laws on the borders of Delhi for almost a month. Most of these farmers are from Punjab, Haryana and Uttar Pradesh.