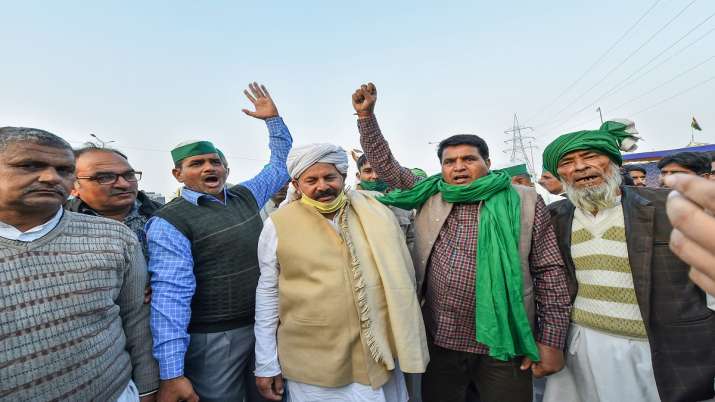 Kisan Andloan farmer protest latest news. Today is the 29th day of Kisan Andolan, why the government and farmers’ organizations are not getting ‘talk’?


new Delhi. The Kisan Andolan continues on Thursday, the 29th day. There has been a deadlock between the government and farmer organizations on the issue of new agricultural legislation. Although it is constantly being said from both sides that they are ready for talks in the direction of resolving the problems of the farmers, but the issues on which the next round of talks will take place is not clear. Farmers’ organizations say that talks should be made if the government gives a concrete proposal. Whereas the government says that any proposal to amend the farmers organization law will be considered.

However, the protesting farmers are firm on the demand for repeal of the three agricultural laws, while the government is not ready to accept their demand. Joginder Singh, president of the Bharatiya Kisan Union (Ekta Ugrahan), Punjab, told IANS that talks should be held if the government talks about repealing all three laws as the amendment is not acceptable to the farmers.

After the meeting of some farmers associations of Punjab on Thursday morning, Joginder Singh said on an IANS question, the proposal to amend the law is the last thing on which talks have already been broken. Now, if the government comes up with a new proposal, then it should be discussed. Our conversation will now be on the issue of what the government thinks about repealing the laws. The IANS asked him what issues the farmer organizations now want to discuss with the government to end the agitation. He further said, we have an elected government and we hope that the government should take a decision soon after taking care of the sentiments of the people as people are sitting here during the winter season.

On the other hand, the government says that the farmers of the whole country are in favor of the law, few people are opposing it. On the question asked in this regard, he said, the government is campaigning by creating a parallel farmer organization and all attempts to break the farmer movement have failed. When IANS asked Pal Majra, leader of the Indian Farmers Union, another organization from Punjab, why the issues of negotiations were not being suggested by the farmers’ organizations, they said that on the demand of repealing the three laws, all the farmers organizations have a There is an opinion and if the government is ready for this, then there will be talks. He said, there are other issues of conversation. For example, there are many other issues including the guarantee of procurement of crops on MSP, stroller combustion ordinance, power subsidy, on which we expect concrete talks with the government.

Explain that the government had sent a proposal to the farmers organizations on December 9 to resolve all the issues of the farmers, which was rejected outright by the farmer leaders. Since then, it has been said from both sides that they are ready for the next round of talks to find a way out. However, neither a new proposal has been made by the government nor by the farmers organizations. In such a situation, the issues of the next round of talks are not clear.

The United Kisan Morcha has once again made it clear that the proposal to amend the new agricultural laws is not acceptable to the farmers and they want to repeal the three agricultural laws. However, in a letter written to the government by the Morcha, it has been said that if the government wants to pursue the negotiations with a clear intention, then the farmers associations are ready for talks. Earlier, Union Agriculture and Farmers Welfare Minister Narendra Singh Tomar told reporters that he hoped that the problems of the farmers would be resolved soon. He said, we hope that the protesting farmers’ organizations will soon give their decision and date for the next round of talks.

Read- Khalistanis and Pakistanis are shocked! Britain government did this work in favor of India

In the Monsoon Session of Parliament, three important bills related to all the three ordinances related to agriculture were introduced in the Parliament and after the approval of both the Houses, the Farmers Produce Trade and Commerce (Promotion and Facilitation) Act 2020, Farmers (Empowerment and Protection) Price Assurance And the Agricultural Services Agreement Act 2020 and the Essential Commodities (Amendment) Act 2020 came into force in September. Farmers’ organizations have been camping on the borders of Delhi since 26 November, demanding the repeal of these three laws.