It has been 27 days for the farmers ‘agitation against the new agricultural laws of the Center and meanwhile, Union Agriculture Minister Narendra Singh Tomar said on Tuesday that he hoped that the protesting farmers’ organizations would soon complete their internal discussions. 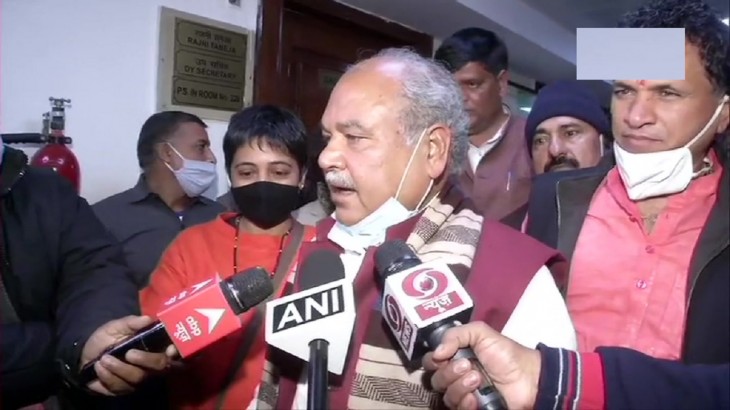 It has been 27 days for the farmers ‘agitation against the new agricultural laws of the Center, and meanwhile, Union Agriculture Minister Narendra Singh Tomar said on Tuesday that he hoped that the protesting farmers’ organizations would soon complete their internal discussions and the government would resolve Will start talks with you again. Tomar also met representatives of two more farmer organizations in Delhi and Uttar Pradesh, who have expressed their support for the laws.

After meeting the two groups, the Agriculture Minister said that representatives of various farmer organizations had come to show that the laws are good and in the interest of the farmers. He came to request the government that no amendment in the laws be done. He said that I hope that he (the protesting farmers union) will complete their internal talks soon and will come forward to negotiate with the government. We will be able to successfully resolve.

The Ministry of Agriculture wrote a letter to the protesting groups on Sunday requesting them to clarify their concerns over the government’s proposals and set a date for the next stage of talks to end the protest. At least five rounds of formal talks between the two sides have been inconclusive and agitating farmers are not agreeing on anything less than repeal of the three laws. The Kisan Sangharsh Samiti (KSS) of Uttar Pradesh and the Indian Kisan Union (IKU) of Delhi are among the farmers organizations that have expressed support for the new agricultural laws in the last three weeks.

Earlier, some organizations of Haryana, Uttarakhand and Uttar Pradesh have supported the government. However, around 40 groups are protesting against the laws on various borders of Delhi and have camped there for 27 days. Rajya Sabha member Surendra Singh Nagar and former Uttarakhand minister and IKU national president Ramkumar Walia were also present in the meeting held on Tuesday. KSS President Ajay Pal Pradhan said after the meeting that all the three laws implemented by the Center are good and are in the interest of the farming community.

KSS, while supporting the laws, also requested the Agriculture Minister that procurement should be continued at the minimum support price (MSP). Pradhan claimed that thousands of farmers who came riding on tractors in support of the laws have been stopped at the border, so only a few representatives came to meet. In a memorandum submitted to Tomar, KSS has also requested the government to implement the agreement between the farmers of Gautam Budh Nagar and the Noida, Greater Noida and Yamuna Development Authorities in 2011-12.

Pradhan said that despite the High Court order, the authorities are not implementing the agreement under which the Uttar Pradesh government had decided to give ten percent of the developed land to the farmers whose land was acquired for development and residential projects. KSS also demanded that the government should notify only the land which is necessary for development. Industries in Secunderabad Industrial Area have developed 45 percent of the acquired land and the rest has not yet been used.

The KSS also called for modernization of mandis, use of mandi tax for development of mandis, a plan to reduce tube wells and to take steps towards agricultural loans at low interest rates. Walia said that we have read the agricultural laws in detail and they are in favor of the farmers. We urge farmers not to be misled on this issue. He said that the new agricultural laws will remove middlemen and provide an alternative to farmers to sell their produce.