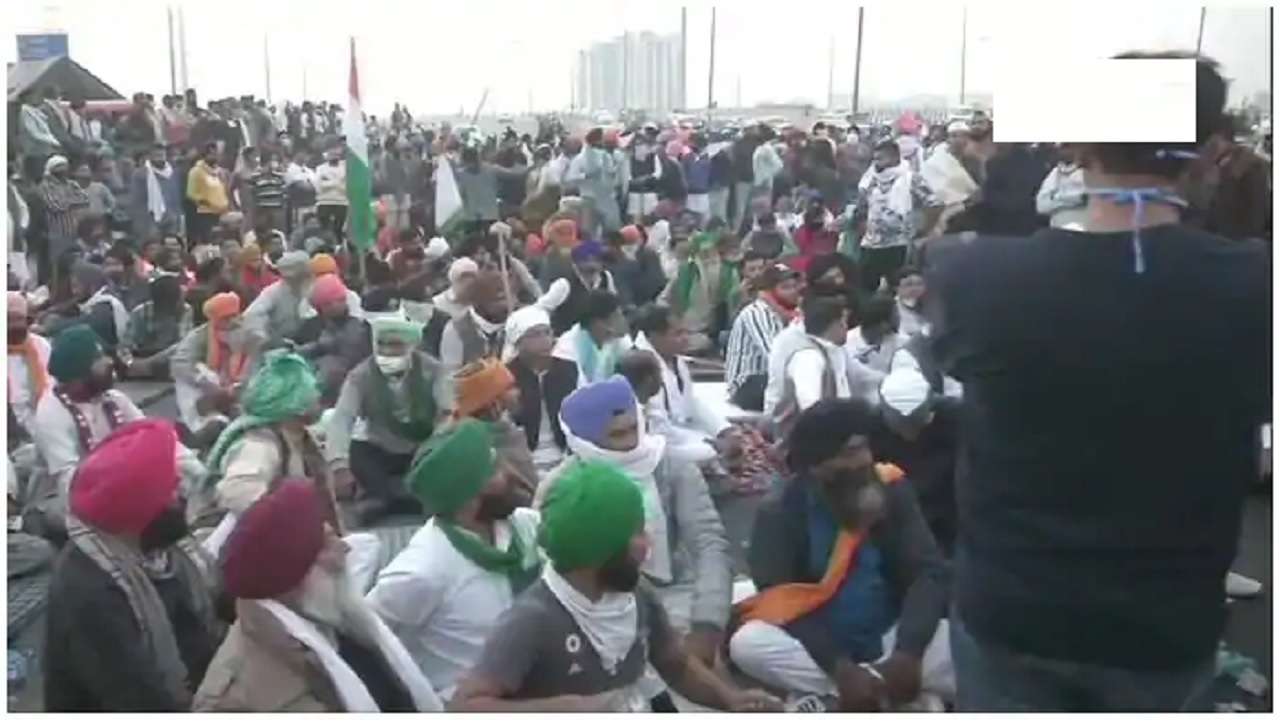 Farmers Protest: The protesting farmers’ organizations deferred the decision on the central government’s proposal for fresh talks till Wednesday, while Union Agriculture Minister Narendra Singh Tomar hoped that the talks would be started soon to end the deadlock on the new agricultural laws. A group of farmers, protesting against the new agricultural laws of the central government, showed black flags to Haryana Chief Minister Manohar Lal Khattar on Tuesday and attempted to stop his convoy in Ambala city.

Demonstrations are being held in many states in support of the farmers who have been demonstrating since 26 November on the withdrawal of three new agricultural laws on the border of Delhi. In Uttar Pradesh, a group of farmers clashed with the police when they were stopped at the Rampur-Moradabad toll plaza. A group of farmers staged a sit-in at the Delhi-Noida border in support of three new agricultural laws, leading to hundreds of vehicles queuing up on the Noida-Greater Noida Expressway.

Officials said that the protesters are mainly residents of Greater Noida’s Jewar and Dadri and they were allegedly stopped by the police at the Mahamaya flyover. He said that normal traffic on the Greater Noida-Noida road was restored only after about three hours. In Kerala, the Congress-led opposition UDF alliance took out a procession to the Raj Bhavan here on Tuesday, expressing solidarity with thousands of farmers protesting in Delhi, demanding the repeal of the three new agricultural laws at the Center. Leader of Opposition in the Assembly Ramesh Chennithala, former Chief Minister Omman Chandy, UDF convenor MM Hasan and other Morcha leaders took part in the procession and dharna.

Kerala Governor Arif Mohammad Khan on Tuesday refused to approve the convening of a special session of the state assembly to discuss and pass a resolution against three controversial central agricultural laws. Assembly sources gave this information. Farmer leader Kulwant Singh Sandhu while addressing a press conference on Delhi’s Singhu border said that 32 farmer unions of Punjab met on Tuesday and discussed the steps forward. He said that a meeting of farmer leaders from across the country will be held on Wednesday, where the government’s proposal will be decided for talks.

Sandhu said he would also write letters to UK MPs and urge them to pressurize their Prime Minister Boris Johnson to not attend the Republic Day celebrations of India on 26 January. Johnson will be the chief guest at the event next month. Vivek Agarwal, Joint Secretary in the Union Ministry of Agriculture, wrote a letter to the leaders of 40 farmer unions on Sunday asking them to clarify their concerns over the earlier proposal to amend the laws and choose a convenient date for the next round of talks. So that the movement going on ends as soon as possible.

It is noteworthy that the sixth round of talks was canceled on December 9 amid deadlock created by the farmers’ organizations refusing to back down their demand for repeal of the three agricultural laws. Union Agriculture Minister Tomar said on Tuesday that he hoped that the protesting farmers’ organizations would soon complete their internal discussions and start talks again with the government to resolve the crisis. Tomar also met representatives of two more farmer organizations in Delhi and Uttar Pradesh, who have expressed their support for the laws.

After meeting the two groups, the Agriculture Minister said, “Representatives of various farmer organizations had come to show that the laws are good and in the interest of the farmers. They had come to request the government that no amendments be made to the laws. “I hope that they (the protesting farmers’ union) will complete their internal talks soon and come forward to negotiate with the government.” We will be able to successfully find a solution. ”Sandhu, however, accused the government of ‘creating a false organization’ which has no past ‘to weaken their movement. Sandhu said in a press conference that farmer leaders will celebrate ‘Martyrdom Day’ from 23 to 26 December.

The protesting farmers’ unions have already announced to stop toll collection on the highways of Haryana from 25 to 27 December. The All India Trade Union Congress (AITUC) and its allied organizations said that they would leave a ‘lunch’ on 23 December to demonstrate solidarity with the farmers. Earlier Tomar had said that new agricultural laws will usher in a new era in Indian farming. He said that the government is still ready to continue talks with protesting organizations on all controversial issues.

“The government held several rounds of talks with the farmer unions and is ready to continue the dialogue on controversial issues with an open mind at every point,” said an official statement. On Tuesday, a group of farmers staged a demonstration outside the Mumbai Suburban Collector Office in Maharashtra and demanded the withdrawal of three new agricultural laws of the Center. Meanwhile, the social media platform Facebook has said that on the ‘Kisan Ekta Morcha’ page the company’s automated system had stopped showing it (unpublished) due to the increase in activities that violated the community norms and it was used as spam Was shown. However, this page was restored in less than three hours.

Facebook faced criticism from all sections when a page called ‘Kisan Ekta Morcha’ was closed on Sunday evening in which ‘official information’ about the farmer movement was being shared. A Facebook spokesperson said, “According to our review, our automated system characterized it as spam due to the increase in activities that violated our community norms on the Facebook page (Kisan Ekta Morcha).

We restored the page in less than three hours after knowing its context. ”The spokesperson claimed, the review also revealed that the Facebook page was affected due to the automated system while there was no difference on the Instagram account. Was lying The central government is introducing three new agricultural laws passed in September as major reforms in the agricultural sector, while the farmers who are protesting have expressed fears that the new laws will end the MSP (minimum support price) and mandi system and they will You will become dependent on big corporates. The government has repeatedly reiterated that the MSP and the mandi system will remain intact and has accused the opposition of misleading the farmers.