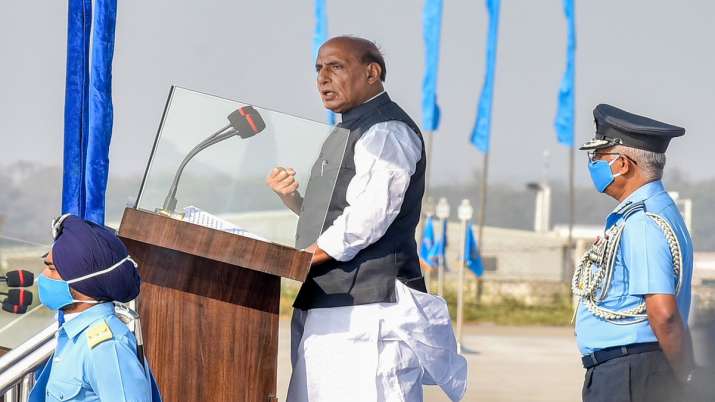 Hyderabad Defense Minister Rajnath Singh said on Saturday that the way India has dealt with the border dispute with China has proved that India is not weak and can give a befitting reply to border violations, aggression and any kind of unilateral action. . Several rounds of talks have also been held between the two countries to resolve this deadlock. The Defense Minister said that India believes in peaceful resolution of disputes but no injury to the self-esteem of the country will be tolerated. There has been a deadlock between India and China in eastern Ladakh for more than seven months.

Addressing the joint graduation parade at the Dindigul air base in Hyderabad, Defense Minister Rajnath Singh said that “China’s attitude during the Kovid-19 pandemic showed its intentions.” He said, “But we proved That India is not weak. It is a new India that can give a befitting reply to border violations, aggression and any kind of unilateral action. ”Singh said that India has received the support of many countries and has also been appreciated.

Referring to several rounds of talks at the diplomatic and military level to resolve the deadlock, the Defense Minister said, “I want to reiterate that we do not want peace, but any kind of injury to the self-esteem of the country.” We will not tolerate it, ”he said. The country is ready to face any situation. Singh said that Pakistan is carrying out sporadic conflicts on the borders. He said that despite defeating India in four wars, the neighboring country is waging “proxy war” through terrorism, but military forces and police are effectively dealing with terrorism.

Referring to India’s air strikes on terrorists’ camps in Balakot, Pakistan, the Defense Minister said that India is not only effectively combating terrorism within the country but also taking action outside the borders. He said that this shows India’s military strength to the world and India’s strong intentions against terrorism.

Emphasizing the need to change war strategies as per the present times, Singh said that the country may face challenges not only in the borders and seas, but also in space and cyber sector, for which it needs to be prepared. . He said, “Therefore you need to keep yourself constantly updated.” He said, “For future war and betterment, it is necessary that besides a soldier, you must also have a scholar.”

The Defense Minister said that the government has recently taken several important steps to strengthen and promote indigenization in the armed forces. He said that Tejas light fighter aircraft (LCA) were included on one side and fifth generation fighter aircraft Rafael were also included on the other side. Singh said that in the form of reforms, several steps have been taken, including raising the foreign direct investment (FDI) limit in defense sector, new policy on defense manufacturing and corporatisation of ordnance factories.