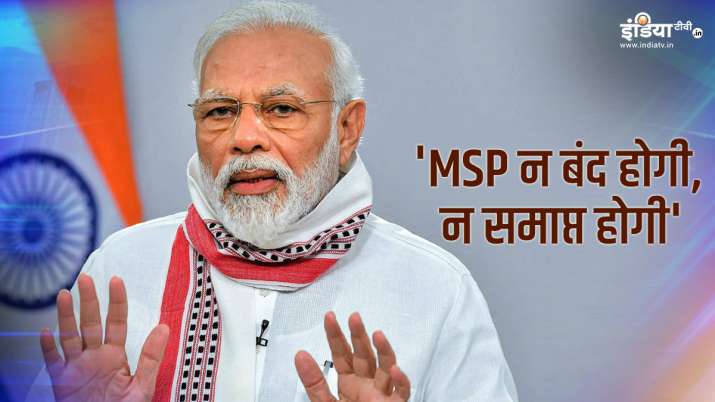 
new Delhi. On Friday, PM Narendra Modi addressed the farmers of Madhya Pradesh. During this time, PM Narendra Modi assured the farmers of the entire country that Like MSP was given earlier, it will continue to be given, MSP will not be closed, nor will it end. PM Narendra Modi said that if we had to remove the MSP, then why would the Swaminathan Committee report be implemented? Secondly, our government is so serious about MSP that every time, it announces MSP before sowing. This also makes it easier for the farmer, he also comes to know first that this crop is going to get such MSP.

PM Narendra Modi said, “It has been more than 6 months, when these laws were enacted. The MSP was announced after the law was made, as it was before. During the fight against Corona epidemic. This work was done as before. The purchase on MSP was done in the same mandis as it used to be. I assure every farmer of the country that the MSP will continue to be given as before. It will be closed, not finished. “

Read- Due to farmer agitation, which routes of Delhi were open and closed, here is the complete list

During this, PM Narendra Modi APMC mandis also mentioned. PM Modi said that another lie related to agricultural reforms is being spread about APMC i.e. our mandis. What have we done in law? We have given freedom to farmers in the law, a new option. In the new law, we have only said that whether the farmer sells in the market or outside, it will be his will. Now, where the farmer gets a profit, he will sell his produce.

Prime Minister Narendra Modi said, “I say with confidence that in the recent agricultural reforms we have done, there is no reason for mistrust, there is no room for lies.”

PM Modi said that pulses farmers are also getting more money, pulses prices have also come down, which has directly benefited the poor. Those who could not give MSP to the farmers, nor could buy it on the MSP manner, they are misleading the farmers on the MSP.

PM Narendra Modi said that the Swaminathan Committee report is a great proof of how ruthless the people talking about farmers are. The report came, but these people kept pressing the recommendations of the Swaminathan Committee for eight years. The peasants used to agitate, protest but did not shake the stomach water of these people. These people ensured that their government does not have to spend much on the farmer. For them, farmers are not the pride of the country, they have used the farmer to increase their politics. Whereas our government dedicated to farmers considers farmers as Annadata. We took out the report of the Swaminathan Committee thrown in a pile of files and implemented its recommendations, giving MSP of one and a half times the cost to the farmers.