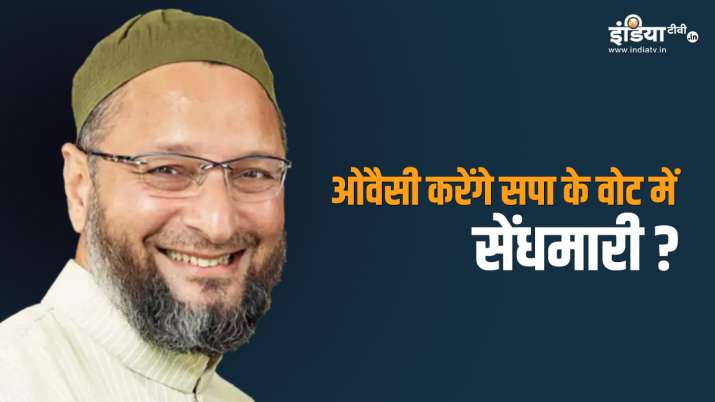 Lucknow. There is still about 15 months in the Uttar Pradesh assembly elections. But apart from the state, political parties of other states have become active on their future prospects in politics here. After the Aam Aadmi Party, the All India Majlis-e-Ittehadul Muslimeen (MIMIM) has made up its mind to beat. Party leader Asaduddin Owaisi was in the capital Lucknow on Wednesday. During this, he met Om Prakash Rajbhar, president of Suheldev Bharatiya Samaj Party (Subhaspa). After meeting both of them, the political mercury of UP has gone up. It is expected that by contesting the elections here, a large group of Muslims can leave the Samajwadi Party and go to Owaisi’s court. This will create problems for the SP.

Difficulties can arise for SP!

According to political experts, Owaisi’s election in UP may cause difficulties for the SP. Because here SP has been getting about 50 to 60 percent of the Muslim voters than each of the parties. In such a situation, Owaisi can infiltrate the Muslim vote bank with the caste equation. Whether it is Congress or BSP, now Aam Aadmi Party also attacks BJP to woo Muslim votes. If Muslim votes are divided, the SP will suffer directly. In such a situation, the SP will have to change the strategy to save its Muslim vote bank. The BJP may lose only a few Rajbhar votes, but Owaisi’s presence will compensate for the opposition’s scattering of votes.

Azam Khan is in jail

Senior political analyst Rajeev Srivastava says AIMIM Owaisi’s party could pose a major challenge for the SP. Because she can do a direct breach on SP’s vote bank. If Owaisi’s party comes out loud in the assembly elections, there will be polarization which will benefit the BJP. Examples are Bihar assembly elections and Hyderabad Municipal Corporation elections. Not only this, if the history of UP is seen, whenever the SP has contested itself by being friendly to the Muslim votes, then the BJP has benefited. Whether it was the 2017 election or the 1991 election. In this case, polarization occurs. There is a possibility of Hindus uniting in it. Which BJP has been promoting. This may cause problems for Owaisi SP. For this, the SP will have to change the strategy. BJP is seeing an advantage. Owaisi is a keen orator. Keep open talk for Muslims. Ever since the BJP came to power, the SP has been lagging behind in wooing the Muslims. Backfoot is also because their elder leader Azam Khan is in jail. SP is more threatened than Owaisi’s party.

AIMIM has been preparing for five years

On the other hand, Uttar Pradesh president of MIMIM, Shaukat Ali said that opposition parties only accuse us of being the ‘B’ team of BJP. No one contacted us in the Bihar elections. We have been ignorant. Why are you crying then? If we were the ‘B’ team of the BJP, the BJP would have ruled in Telangana. We reject it. Whose team is you contesting from here? We have been preparing here for five years. SP BSP has done the work of wooing Muslims here. We are making organizations fast. 25 percent will contest the UP assembly elections. Everyone should come on one platform to stop the BJP. In Muslim majority seats, if SP-BSP does not give Muslim candidates then we will defeat BJP. Because the SP, BSP and SP Congress have not been able to stop the BJP despite being united.

Read- Vedic Paint: In this way farmers will be able to make extra income of ₹ 55000, Nitin Gadkari gave information