According to India Meteorological Department, fog will be affected in western UP, Punjab, Haryana, Delhi, Chandigarh, Rajasthan today. Also, there is a possibility of cold wave in these areas. 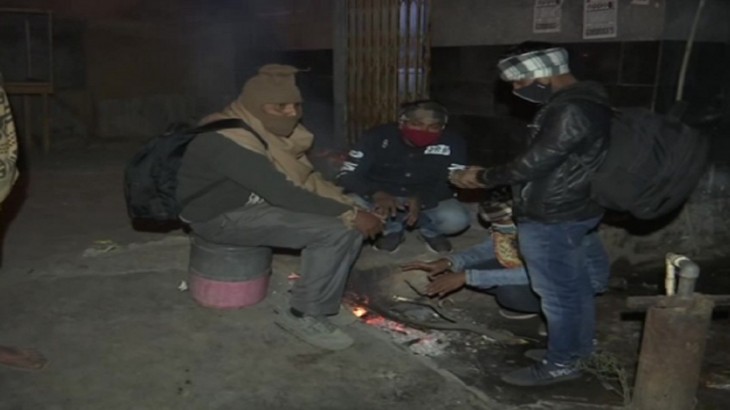 People warming up in Anand Vihar to ward off the cold. (Photo Credit: News Nation)

In the national capital, the minimum temperature was recorded at 5 degree Celsius on Thursday and the entire city is in the grip of cold wave. The Indian Meteorological Department (IMD) has forecast cold and cold wave conditions in Delhi on Thursday and Friday. The IMD said that on Thursday, the minimum temperature in Delhi is three degrees below normal, while the maximum temperature is expected to be around 15 degrees, 7 degrees below normal. According to India Meteorological Department, fog will be affected in western UP, Punjab, Haryana, Delhi, Chandigarh, Rajasthan today. Also, there is a possibility of cold wave in these areas.

Temperatures falling from Himalayan snowfall
According to IMD, the minimum temperature is expected to be around 5 degree Celsius till Friday. Kuldeep Srivastava, head of IMD’s Regional Forecast Center, said that due to western disturbance, heavy snowfall occurred in the western Himalayas and now the temperature is coming down due to cold wave flowing towards the plains. He told that cold wave is expected to continue with the day being cold on Thursday and Friday.

Chill will cause cold in the plains
He told that if the temperature in the plains is below 10 ° C or 4.5 ° C below normal for two consecutive days, a cold wave is declared, but in a small area like Delhi, if this situation persists even for a day, a cold wave is declared. May go. Meanwhile, air quality in Delhi was recorded in the ‘poor’ category. The average air quality index (AQI) in the city was recorded at 262 in the last 24 hours.