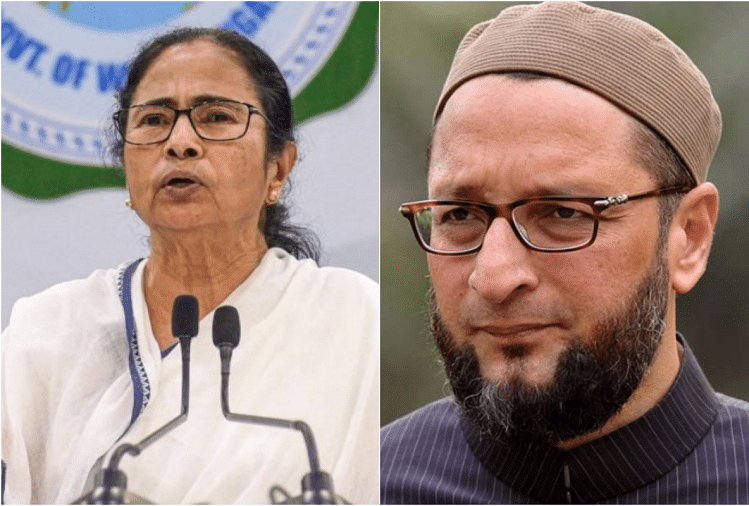 Mamata Banerjee Accused Asaduddin Owaisi Of Taking Money From Bjp No One Was Born Till Today Who Can Buy Asaduddin Owaisi – Mamta’s allegation of Owaisi taking money from BJP, Hyderabad MP said – no one born till date

Political mercury has been rising before the assembly elections in West Bengal. Senior BJP leaders have been holding rallies in the state continuously to give a boost to Chief Minister Mamata Banerjee’s party TMC. At the same time, Mamta has also given a shout in view of the assembly elections.

Targeting the BJP at an election rally on Tuesday, Chief Minister Mamata said that the BJP is trying to bring Asaduddin Owaisi’s party AIMIM to Bengal. At the same time, on this allegation of Mamta, the head of All India Majlis-e-Ittehadul Maslimeen (AIMIM) and Hyderabad MP Asaduddin Owaisi has said that no one has been born till today, who can buy Asaduddin Owaisi with money.

Never was a man born who can buy Asaduddin Owaisi with money. Her allegation is baseless and she is restless. She should worry about her own home, so many of her people are going to BJP. She has insulted the voters of Bihar and the people who voted for us: Asaduddin Owaisi, AIMIM https://t.co/mT1fe7piii pic.twitter.com/8rfWq5eSk3

Hyderabad MP said, till date no man has been born who can buy Asaduddin Owaisi with money. His allegations are completely baseless and he is restless. He should worry about his house (party), because many of his people are joining BJP. He has insulted the voters of Bihar and the people who voted for us.

What did mamta say
West Bengal Chief Minister Mamata Banerjee said that BJP is trying to bring Asaduddin Owaisi’s party AIMIM to Bengal. He said that by doing this, the BJP wants to polarize communalism and share Hindu-Muslim votes among themselves.

Addressing a rally in Jalpaiguri, Banerjee said that the BJP is spending crores of rupees to bring a party from Hyderabad here to divide Muslim votes. The plan is that the Hindu vote will go to the BJP’s court and the Muslim vote will get to this party in Hyderabad. He said that he did the same in the recent Bihar elections. This party is BJP’s B-team. Elections for the 294-member assembly of West Bengal are to be held in April-May next year.

AAP, AIMIM and Suheldev may be alliance of Bharatiya Samaj Party
Actually, Uttar Pradesh is going to have assembly elections in the year 2022. In such a situation, the parties have already started forming alliances. The Aam Aadmi Party has also announced to contest the UP Assembly elections. In this episode, AIMIM chief Owaisi met Om Prakash Rajbhar of Suheldev Bharatiya Samaj Party in Lucknow.

At the same time, when the Hyderabad MP was asked whether Prakash Rajbhar and he can contest elections together with the Aam Aadmi Party. In response to this question, he said, both of us (Om Prakash Rajbhar of Suheldev Bharatiya Samaj Party and he) are sitting in front of you. We stand together and we will work under his leadership.

The two of us (Suheldev Bharatiya Samaj Party’s Om Prakash Rajbhar & he) are sitting before you. We stand together & we’ll work under his leadership: AIMIM Chief Asaduddin Owaisi when asked if his party will hold talks with AAP