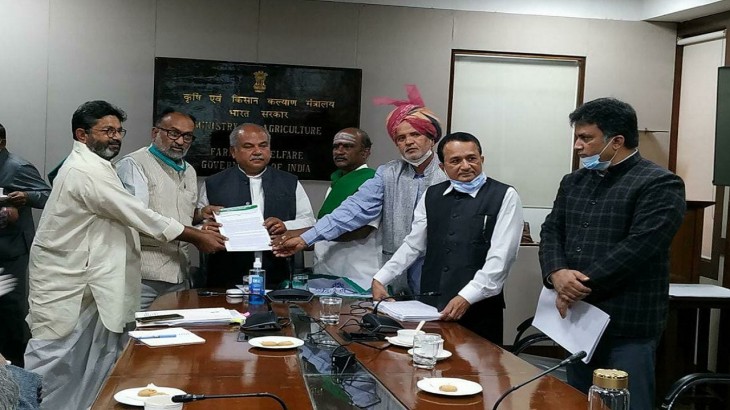 Farmers Protest: Due to the protests of the farmers against the new agricultural laws of the Center, many routes to Delhi remained closed on Monday. On this, officials of farmers associations of Haryana, Maharashtra, Bihar and other states met Union Agriculture and Farmers Welfare Minister Narendra Singh Tomar in Delhi on Monday. During this time, the farmers gave them a memorandum demanding to keep the new agricultural laws brought by the Government of India with some amendments and discussed it in detail in the meeting at Krishi Bhavan.

Haryana Deputy Chief Minister Dushyant Chautala said that the Agriculture Minister and Home Minister are constantly discussing the new agricultural law. The next round will also be discussed soon. I hope that the 40 unions for the first dialogue will also join the next round of talks, in which a conclusion will be drawn.

Due to the protests of the farmers against the new agricultural laws of the Center, many routes to Delhi remained closed on Monday. In view of this, the traffic police of Delhi informed the people about the closed routes through Twitter and advised them to travel by alternate routes to avoid trouble. Farmers of various states have been camping in Delhi’s Singhu, Tikri, Ghazipur and Chilla borders (Delhi-Noida border) for two weeks, demanding the Center withdraw the agricultural laws implemented in September.

The traffic police tweeted that the Singhu, Auchandi, Piau Maniyari, Sabholi and Mangesh borders are closed, so commuters should travel through the alternative lampur, safiabad and singhu school toll naka border. Route has been changed on Mukarba and GT Karnal Road. Passengers avoid the outer ring road and NH-44.

The Delhi Traffic Police made several tweets stating that the Ghazipur border would be closed for those coming from Ghaziabad to Delhi, so people are advised to come to Delhi to visit Anand Vihar, DND, Chilla, Apsara and Bhopra. Select alternate paths along the border. It is noteworthy that farmer leaders are fasting for a day on Monday against the agricultural laws of the Center.