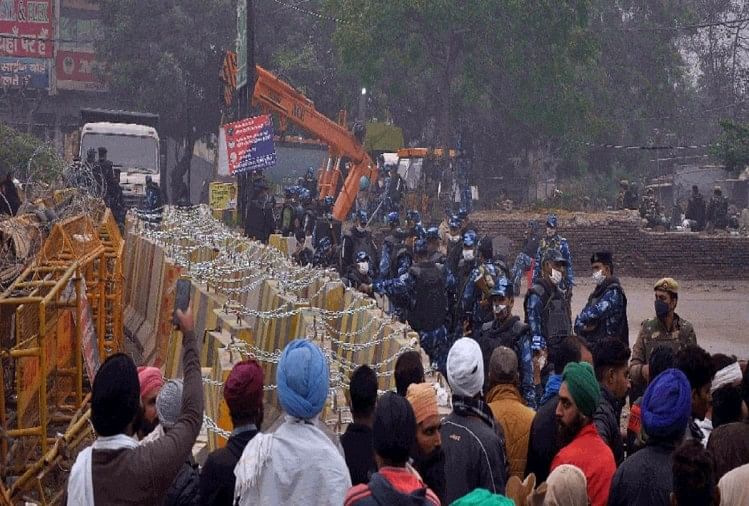 The farmers remained adamant on the 17th day, among other demands, including the repeal of the new agricultural laws. However, it has postponed it till Sunday, altering the previously announced plan to block the Delhi-Jaipur highway. Farmer leaders termed the decision as strategic and said that now a fourth front will also be opened under the banner of United Kisan Morcha.

Farmers have already occupied the borders of the capital in the north, west and east, now the south border will also be occupied. On Sunday, the farmers will travel from the Jaipur-Delhi highway to Delhi. by this

On the first Saturday, tolls were made free on many highways. On the other hand, the continuation of farmers from other states of the country including Punjab, Haryana continues on the borders of Delhi. Giving information about the change in the plan, Yogendra Yadav said that the fourth front will also open in the historical struggle of the farmers. Thousands of farmers will travel to Delhi with hundreds of vehicles from Shahjahanpur (Behror and Kotputli) of Rajasthan-Haryana border at 11 am today. Movement further strengthened after talks between farmers’ organizations and Center stalemate
This step has been taken in the direction of doing.

Farmers arriving from Punjab-Haryana
Bharatiya Kisan Union (Rajewal) General Secretary Onkar Singh said that the process of reaching farmers in tractors is still going on along the borders including Tikri, Singhu border. Saturday protests
Describing the demonstration as successful, the farmers’ protest against corporates including toll toll free has started intensifying. Farmer leaders Pargat Singh and Lakhwinder Singh at Tikari Border
Addressed the farmers. To strengthen the movement, batches of farmers are constantly reaching out under the banner of different farmer organizations of Punjab. Agitating farmers 14 December
There will be protests in all the districts of the country.

No matter how cold the weather is, Chudhuni will not back down
Gurnam Singh Chadhuni of Bharatiya Kisan Union, Haryana said that the agitators are firm on their demand. Under no circumstances will they retreat. No matter the weather is cold, the movement will not end until the government does not accept the demands of the farmers.

Badli toll free till five o’clock
Virendra Dagar, state president of the Bharatiya Kisan Union, Delhi, on Dhansa Border, said that Badli toll was freed till 5 pm, while other khaps including Gulia Khap, Ahlawat, Sehrawat are also getting support from Haryana. The farmers are now making further strategies, so that the farmers’ movement does not become weak.

Conspiracy to discredit the movement, cases will be filed in Punjab
Onkar Singh, the leader of Bhakiyoo Punjab, said that a conspiracy was being done to weaken the peasant movement. There may not be farmers displaying posters. Through this, cases will be registered in different districts and tehsils of Punjab on behalf of farmers organizations against those who try to discredit and weaken the movement.