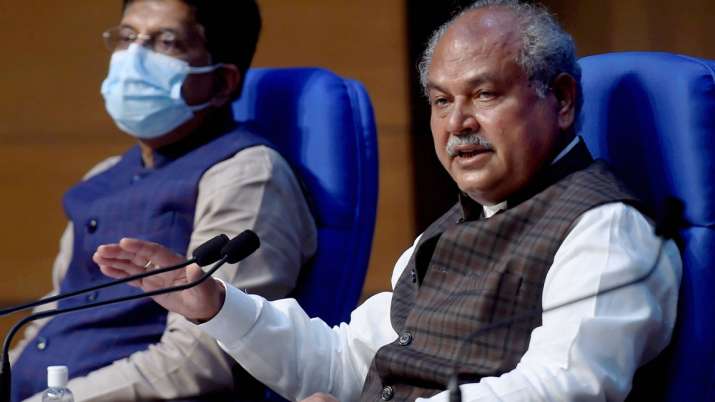 New Delhi: Union Agriculture Minister Narendra Singh Tomar on Sunday accused the opposition parties of propagating the new agriculture laws and said that these laws “may cause problems for some time”, but in the long run Will prove beneficial for the farmers. To end the impasse, Tomar, who was leading the negotiations with 40 protesting farmers unions, was addressing a delegation of over 100 farmers from Uttarakhand who had come to support the laws.

Minister of State for Agriculture Kailash Chaudhary and Education Minister of Uttarakhand Arvind Pandey were also present in the meeting. Addressing the delegation, Tomar said that the government faced opposition when it withdrew special state status from Jammu and Kashmir. Similarly, the amendment in the Citizenship Act and the Ram temple issue were also opposed. He said, “When agrarian reforms were introduced, there was opposition on that too. Some people want to weaken the country only by protesting. It has become his habit. ”

Tomar said that the issue of reform in the agricultural sector was under discussion for many years. He said, “Unfortunately, the previous governments could not bring the reforms they wanted. She did not make efforts so she could not take credit for it. ”Tomar stressed that reforms are necessary for a new India. The minister said, “The reforms brought will benefit the farmers in the long run. There may be problems for some time. We know that nothing can be achieved without difficulties. ”Tomar said that Prime Minister Narendra Modi is bringing reforms or schemes that are beneficial in the long run.

The minister said, “Any good government or good leader is one who does such tasks which not only ensure the security of the nation in the present, but also progress the country for the next hundred years.” Tomar said that the Prime Minister has fulfilled the long pending demand of farmers. He said that farmer leaders like Sharad Joshi of Shetkari organization, Bhupinder Mann of Punjab, NCP leader Sharad Pawar have been talking on these issues. Tomar said that agricultural scientist MS Swaminathan had also raised these issues. The Agriculture Minister said that the National Farmers Commission, Planning Commission and Niti Aayog also raised such issues, but previous governments did nothing.

He said, “Manmohan Singh ji (former Prime Minister) tried many times, but did not succeed. Today when these have been implemented, propaganda is being carried out. ”Meanwhile, Tomar met Union Home Minister Amit Shah during the demonstration of farmers. The deadlock between the central government and the protesting farmers regarding the new agricultural laws remains. Farmers’ unions say that the new laws will end the MSP system, under which government agencies buy crops at fixed prices from farmers. In a proposal sent to the farmers on Wednesday, the Center said that it is ready to give written assurance that the MSP system will remain intact and other concerns of the farmers will also be considered. However, the farmers’ unions are demanding withdrawal of central laws and have also warned to intensify the movement.