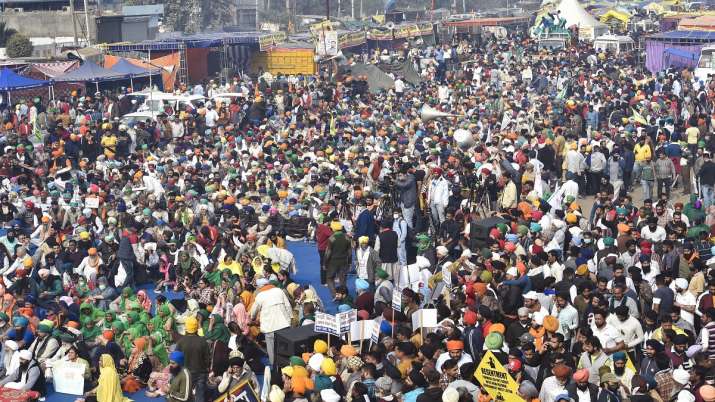 
new Delhi: Farmers rejected the proposal of the Center and created a new problem in front of the government. Farmers are adamant on the demand for withdrawal of the new agricultural law. The farmers have announced to intensify the movement till the new agricultural laws are withdrawn. With this, they are now preparing to surround Delhi. On December 12, the farmers announced to block the Delhi-Jaipur and Delhi-Agra highway. Not only this, the farmers have announced that on December 14, they will protest across the country.

Both sides are ready for talks

The sixth round of talks between the government and leaders of farmer organizations, scheduled for Wednesday, was called off, but both sides said they were ready for talks. Farmer leader Shiv Kumar Kakka while addressing the press conference said that there is nothing new in the government’s proposal and the ‘Samyukta Kisan Samiti’ in its meeting on Wednesday “completely rejected” it. Leaders of farmer organizations called the proposal an “insult” to the farmers of the country. However, he said that if the government sends a new proposal for talks, they can consider it.

Call for ‘Delhi Walk’ on 14 December
According to the leaders of farmer organizations, on December 14, ‘Delhi Chalo’ has been called for all the farmers of North India, while the farmers living in South India have been asked to perform at the district headquarters. The Shiromani Akali Dal alleged that the Center proposed “old wine in a new bottle” and the farmers corrected it by rejecting it. Farmer leaders said that on December 14, they would gherao BJP ministers, party district offices and boycott party leaders.

Strict on the demand to repeal agricultural laws
The proposal was sent to the farmers on Wednesday, a day after the Union Home Minister met 13 representatives of farmers on the new agricultural laws. In the proposal, the government said that it is ready to give “written assurance” to continue the system of minimum support price (MSP) currently in force. Farmer leader Darshan Pal said that the farmers have rejected the proposed amendment in the law because they want nothing less than the repeal of the laws.

Nothing new in the government’s proposal – farmers
He said that there is nothing new in the new draft, which Union Agriculture Minister Narendra Singh Tomar said in his earlier meetings with farmer leaders. He said that the protesting farmers would close all the highways of the national capital on December 14 and would encircle the district headquarters as well as the BJP’s district offices. Farmer leader Shiv Kumar Kakka said that if the three agricultural laws are not repealed, the farmers will stop all the roads coming towards Delhi one by one. He said that there is no disagreement among farmer organizations, as a section of the media (differences) is showing. He said, “We took a unanimous decision. It is a unanimous decision, not that majority cannot agree to it, some people do not. If all organizations said that the law should be withdrawn, then it is our decision. There is no question of personal opinion.

Law-government is farmer friendly
Farmer leader Jangveer Singh said, “We will boycott establishments and services owned by Adani and Ambani.” In the draft proposal sent by Vivek Agarwal, Joint Secretary in the Ministry of Agriculture, on behalf of the government, the government is ready to openly consider the objections of the farmers regarding the new agricultural laws. In this, however, there is no mention of the main demand of the protesting farmers to repeal the new agricultural laws. The deadlock could not be overcome even in the farmers’ meeting with the Home Minister. The government is adamant on keeping these laws as farmer friendly.

Government-farmers withdraw unconditional new law
Regarding the meeting with the Home Minister, Kakka claimed, “When we asked Amit Shah why the government had not consulted with the farmers before enacting all three laws, they admitted that something was wrong.” “Bharatiya Kisan Union (Dakonda) General Secretary Jagmohan Singh said that” We are considering sending an answer to the Central Government. “The Shiromani Akali Dal on Wednesday led the BJP-led Central Government with innocent farmers. Asked to stop messing and unconditionally demanded the withdrawal of all three agricultural laws. The Shiromani Akali Dal said, “The proposal given by the Center is nothing but a delaying and misleading tactic which farmers have already rejected.” Shiromani Akali Dal leader Vikram Singh Majithia said that the Center There is nothing new in the proposal of. He said, “It is sad that the Annadata of the country is performing for the last 14 days of his family”.