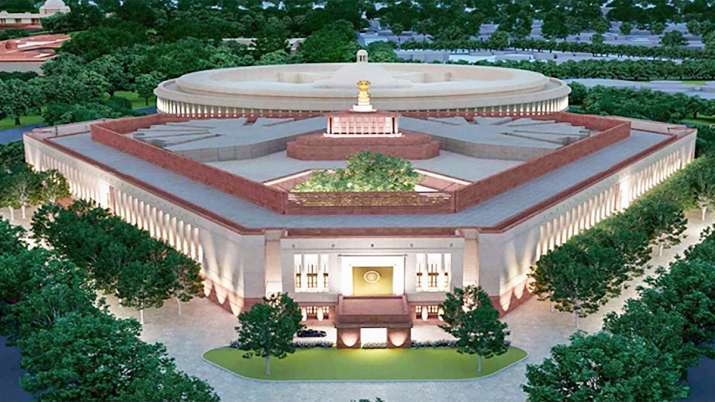 1- Central Hall will not be

2- Seats in Lok Sabha
The new Parliament House will have a seating arrangement of 888 MPs in the Lok Sabha than ever before. The current Lok Sabha has a seating capacity of only 552 MPs. Thus, when the number of MPs will increase in the coming years, there will be no problem. The new Lok Sabha will be thrice the present.

Number of seats in Rajya Sabha
The Rajya Sabha of the new Parliament House will also be larger than before. The current Rajya Sabha has a total strength of 245 seats. There will be a provision of 384 seats in the new Rajya Sabha. Thus even if the number of Rajya Sabha MPs increases in future, there will be no shortage of space in the House.

6- Modern facilities on every seat
The country will get the gift of a new Parliament House in the year 2022, on the 75th anniversary of independence. This building also means that it will be the first parliament building built after independence. Every MP’s seat in the house will have a multimedia display in front of it.

7- Eco-friendly construction
The new parliament building will use green construction material. Eco friendly building will be built. Such devices will be installed, which will save 30 percent electricity. There will also be arrangements for rain water harvesting and solar power generation. Houses will have more comfortable seats than before. Tata Projects Limited will construct the new Parliament building in a total area of ​​64,500 sqm. The building is designed by HCP Design Planning and Management Private Limited.

9- Special feature for media
The new Parliament House will also have special facilities for the media. A total of 530 seats will be arranged for the media. Both houses will have galleries for general public to see the parliamentary proceedings. There will be a clear view of the house from every seat.

10- Public Parliament House
Preparations are on to make the new Parliament House a public parliament house. Entry of children, elderly and disabled will be easy. There will be two special entrance points for the general public. With which they will be able to reach the Public Gallery, Central Constitutional Gallery. Fire safety was not properly maintained in the earlier building. Now the new building will have proper fire safety.