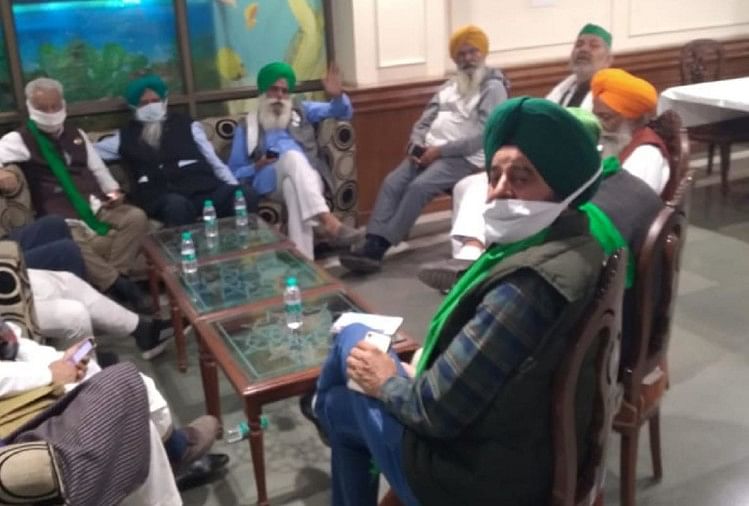 Farmers Protest: Know the Inside Story of How Meeting Between Amit Shah and Farmer Leaders – The Tale of the Farmer Movement: Bhakiyu Ugraha Isolated, Why Did the Meeting Call, Where Did It Not Happen?

Mangal signs were not found again on Tuesday amid the ongoing agitation against the new agricultural laws. The deadlock between the government and agitating peasant leaders persists. When the agitating farmers’ delegation was called by Home Minister Amit Shah for an informal conversation on Tuesday evening, there was hope for Mars. After Bharat Bandh, now 9 December is important for this movement. The government’s sixth round of formal talks with agitating peasant leaders were to be held on Wednesday, which has now been postponed. But the government will give a fresh written proposal to the farmers’ organizations after the talks so far. There is a meeting of Modi Cabinet on Wednesday and on this day the delegation of opposition parties is going to meet the President. In such a situation, the eyes remained on whether the matter would be formed by ‘Chanakya policy’ or else it would be stalled. Wednesday’s negotiations came to a halt as the government’s soft-spoken approach stalled the withdrawal of all three new agricultural laws by farmer leaders.

On Tuesday evening, besides the Home Minister Amit Shah, along with Agriculture Minister Narendra Tomar, Commerce and Railways Minister Piyush Goyal’s Somprakash, a 13-member marathon meeting of the farmer groups took place for about two hours. After leaving the meeting, Dr. Darshanpal of Revolutionary Farmers Union and Buta Singh Burjagil of Bhakuyu Ekta Dakonda told that informal meeting with Amit Shah was inconclusive. Home Minister Shah told the farmer groups, except the withdrawal of the three laws, other issues should be discussed first. Some issues have already been resolved. On this, the farmer leaders said, in the past, many rounds of talks have been held on many issues, but till now no written proposal has been received from the government.

Sources reveal that Shah was assured that the government agreed to amend the four major objections, including a written guarantee of the minimum support price (MSP), a minimum penalty of one crore for burning stubble, a partial change in 2020 power, but farmers The delegation of leaders insisted that they would not obey until all three laws were withdrawn. Then the matter got stuck here. The deadlock continues.

Anecdote
The question is, why and how the farmers leaders meet with Amit Shah suddenly on Tuesday. In fact, in the last round of the fifth round, it was decided that before the next negotiation, the government would give an indication to the peasant leaders how their demands were being amended or considered. For this, the government has fixed the 7th. This deadline has passed. There were no indications from the government to the farmer organizations. Dr. Darshanpal of Bakiu Kranti says that the government’s written proposal has not been received yet. On the other hand, it was said from the government that the objections from the farmers were to be received. Dr. Darshan Pal says that the farmers had made their demands on the first day and till the last conversation, they had said that whether the law will be withdrawn or not.

In fact, the eyes of the agitating peasant leaders along with the government remained on the Bharat Bandh of 8 December. After the support of 22 opposition parties, the Bharat Bandh had a widespread impact in Punjab, but the rest was partially or mixed. The government recognized the strength of the common people and farmers as well as the opposition and agitating farmers during the bandh. The 22 parties which joined the agitating farmers’ organizations in protest against the government’s new agricultural law, these opposition parties have been ‘united’ against the Modi government on many issues before.

After the fifth round of negotiations, when the farmers’ organizations called off on 8th and after the deadline of 7th, no signs (demands on proposals or written proposals for amendment) were received from the government, then the deadlock was removed Tuesday. Rakesh Tikait of Bhakiyu (UP) played the mediator in opening the doors of the evening’s conversation. In this peasant struggle, 32 jatbandhis of Punjab alone are firmly entrenched, but Yogendra Yadav, the strategist of All India Samyukta Kisan Morcha of more than five hundred farmer organizations across the country, was the first condition to not be part of this dialogue. Initially, Home Minister Shah asked to have only five representatives in the negotiating delegation. The peasant groups did not agree to this. The number then went from 11 and finally to 13.

This was the government’s proposal
During the first negotiations after the Delhi Chalo movement, a proposal of the government was noted. The government was asked to decide the names of a few selected leaders for talks and the same delegation should sit together to find a solution from the government. The peasant groups did not agree on this and advocated collective dialogue. The delegation grew to 40 members from 35 to the fifth round of talks in the first round. Today may not have been a formal conversation, but the proposal was brought by the government to the peasant leaders on the first day. That is, select 13 representatives instead of collective interactions. It was not a question of the victory and defeat of the government and farmer organizations, but when there was talk of farmer representatives with Amit Shah, only then came the written statement of Yogendra Singh Ugraha, the provincial president of the most effective farmer jathedbandi Bhakiyu Ugraha of Malba, Punjab , The peasant groups should not have been involved in informal negotiations of the government.

Jhanda Singh Jethuke of Bhakiyu Ekta Ugraha said, “His organization does not even have information regarding talks with Amit Shah.” The discussion of this incident is because even after the movement of 32 Jatbandis traveled from Punjab to Delhi, the Ugraha faction has remained in Delhi as well as in Malba in Punjab. Due to this strength, the representatives of Ugraha did not participate in the initial talks but in subsequent talks they were joined by two or two representatives. It is important to ignore the effective farmers union Ugraha in an informal meeting with Shah on Tuesday. Recall that the day before, 20 organizations of progressive farmers of Haryana have met the Agriculture Minister under the leadership of Atar Singh and have given written support to the new agricultural laws. In the same sequence, on Tuesday also the meeting of Haryana Chief Minister Manohar Lal with the Minister of Agriculture Tomar. It is clear that the peasant movement is a growing step towards ‘half’. Meanwhile, PM Modi wished Akali leader Prakash Singh Badal on his birthday. Significantly, Bhakiyu Lakhowal is a Akali supporter involved in talks with Shah. Now everyone’s eyes are again focused on the mutual churn and attitude of the farmer groups after receiving the written proposal of the government on 9 December.