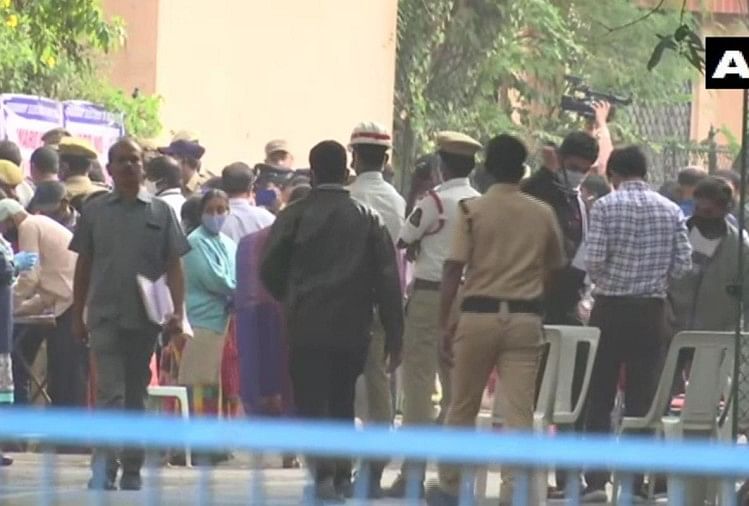 The BJP has performed well in the Greater Hyderabad Municipal Corporation (GHMC) election in a hard-fought contest. Increasing its penetration here, the BJP has virtually intimidated the ruling TRS in the state, which barely managed to retain its control over the civic body.

Voting took place on December 1 under the GHMC election. The election results of 146 in the 150 wards of the corporation had come till the last news. Telangana Rashtra Samithi (TRS) has won 55 seats, while BJP has won 48 seats. AIMIM has won 44 seats and Congress has so far won two seats.

TRS has not described the election results as expected but its executive head KT Rama Rao said there was nothing to be disappointed about it.

He thanked the people for winning the TRS in the most seats. The chief minister’s son Rama Rao said that the party’s performance would be discussed in the party meeting.

BJP’s great performance
The BJP has emerged as the TRS’s main rival in the election results, although the ruling party in the state, TRS, is still ahead of its rivals and the saffron party gets a good number of seats, which will boost the morale of the party workers before the next assembly elections. .

After winning four seats in the 2016 GHMC election in alliance with the Telugu Desam Party, this time it has jumped 10 times on its own.

On the BJP’s best performance, the party’s state chief B Sanjay Kumar said it was a ‘saffron attack’ in which voters expressed confidence in the BJP and voted against the TRS.

The BJP won four seats in the state in the 2019 Lok Sabha elections and then defeated the ruling party in the Dubbak assembly by-election.

The BJP had fielded Union Home Minister Amit Shah, party president JP Nadda and Uttar Pradesh Chief Minister Yogi Adityanath to campaign in the GHMC election with the goal of strengthening its chances in the 2023 assembly elections.

Bhupendra Yadav said in Delhi that the BJP’s performance has confirmed that it is replacing Congress as the main challenger to TRS.

The BJP had won four seats in the state in the 2019 Lok Sabha elections.

Bhupendra Yadav said, moral victory for the party
Bhupendra Yadav, who was appointed in-charge for local elections in Hyderabad, said the election results are very encouraging, boosting the morale of the BJP and in a way it is a moral victory for the party. The result shows that Prime Minister Narendra Modi’s leadership and his model of good governance have acceptance in all areas.

Reddy said that he has asked the All India Congress Committee to start the process of selecting the new state president.

The Asaduddin Owaisi-led AIMIM has performed well in the old city of Hyderabad, its traditional stronghold.