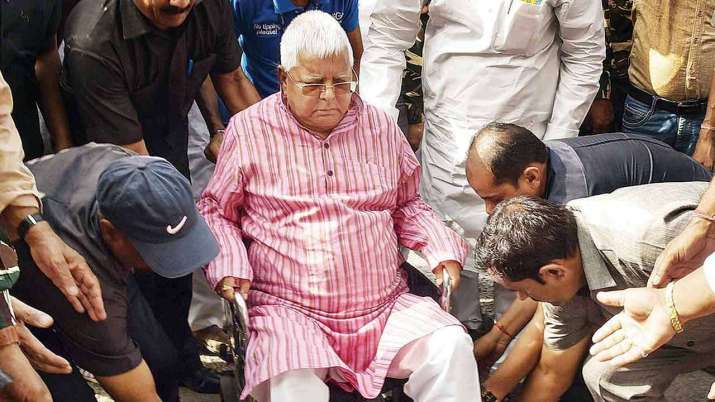 
Ranchi: The Jharkhand High Court has asked the state government, on whose orders Lalu Prasad Yadav, convicted in the fodder scam, was shifted to the ‘Kelly’ bungalow of the director of the Rajendra Institute of Medical Sciences (RIMS) and was recently shifted from the bungalow to the ‘paying ward’. Shifted to ‘? During the hearing of the case related to alleged misuse of facilities for treatment at RIMS by Lalu Yadav, Justice Aparesh Kumar Singh raised these questions to the state government. The High Court also wanted to know that on what basis Lalu’s sevadar was appointed in the hospital and who is responsible for it and who can be made sevadar in the hospital?

Earlier, during the hearing in the case related to Lalu in the bench of Justice Aparesh Kumar Singh, Additional Advocate General Ashutosh Anand presented the side of the state government. He told the court that the Standard Operating Procedure (SOP) has been made for the inmates undergoing judicial custody, under which their security is arranged and the process of meeting people. The High Court also asked the state government that if the prisoner gets unnecessary people, then which officer will be responsible for this?

Let us tell you that on November 27, the CBI took up the case during a debate in the High Court on the bail plea of ​​Ilajrat Lalu Yadav in judicial custody after receiving 14 years imprisonment in four different cases related to the Rs 950 crore fodder scam. Had and told the court that Lalu is misusing the treatment facility found in Rheims. The court then directed the CBI after hearing that it would hear the case on December 4.

The importance of hearing in both these cases, especially in the High Court, was further heightened in the backdrop of Lalu Yadav’s alleged call to BJP MLA Lalan Paswan for allegedly toppling the Bihar government. Due to this phone call, Lalu Yadav was sent back to the rims ward on November 26 from the bungalow of RIMS director in a hurry.