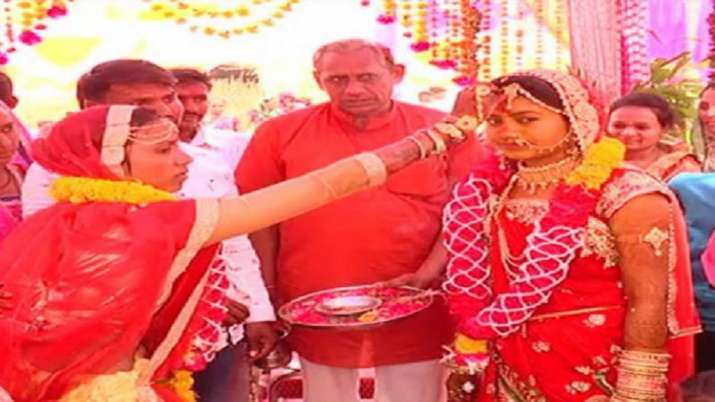 Wedding ritual groom sister gets married to the bride. In this country of the country, the bride does not take her sister with her bride for 7 rounds, know what is the reason


new Delhi. Not only is India called a country full of diversities, people of thousands of castes live here and their rituals are also different. There are many cities and villages here, where the old traditions are still accepted as beliefs. But have you heard such a practice that the groom cannot take seven rounds with the bride in her own wedding. You are also shocked to hear this. In his own wedding, the groom does not take 7 rounds with the bride but instead his unmarried sister or any unmarried woman of his family to represent the groom in the pavilion. Absolutely true. Know where and why this happens in India.

Actually, Surkheda, Nadasa and Ambal villages of Chhota Udaipur in Gujarat have been carrying on a unique tradition for many years. Tribals live in these three villages and in these villages the marriage takes place without the physical presence of the groom. In these villages even today the groom does not go to his wedding. In these villages, the groom is married without a groom and instead of the groom, his sister takes the procession and goes to the bride’s house.

The people of Surkheda village tell that the groom’s sister leads the procession and takes the bride home with a round, while the groom has to stay indoors with his mother. All the wedding rituals played by the groom are performed by his sister. Nanda only performs all the wedding rituals with her sister-in-law. The groom’s sister also takes seven rounds with the bride. She then brings her sister-in-law home. At the wedding, the groom wears a sherwani and ties a safa on his head, but instead of going to the bride’s house, he waits for the bride to come home with the mother.

This is the reason behind the strange tradition

There is a legend behind this tradition in these three villages. According to the legend, the village deities of three villages Surkheda, Nadasa and Ambal were unmarried, so to honor them, the groom is kept inside the house on the wedding day itself. It is believed that by doing this, the groom is saved from the troubles and the married life of the bride and groom remains happy. According to the custom here, at the time of marriage, the groom wears sherwani-safa and also carries the traditional sword. But he cannot take seven rounds with the bride. Residents of Surkheda tell that whenever people tried to break this practice, they had to face many problems. Either the marriage of those who did so broke, or other plagues came upon them. In such a situation, this belief became stronger in the people that if they do not follow this practice then there may be some loss. People here believe that it is auspicious to marry this tradition. If no one marries this tradition then the bride and groom’s marital life gets spoiled. Problems arise in his life.